There and Back Again: The Philippines 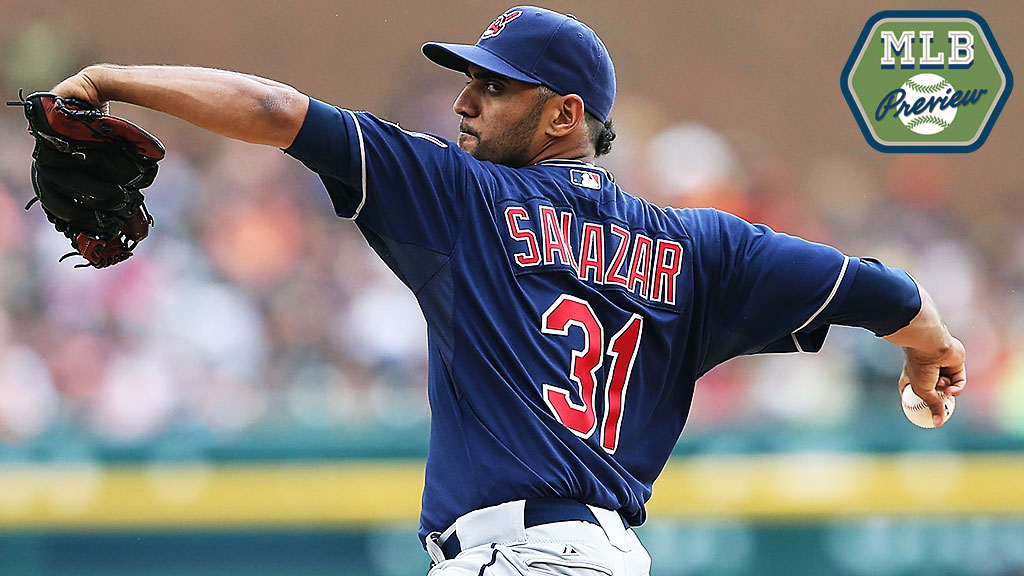 If you’ve been reading Grantland’s baseball coverage this spring, you’ve probably noticed an obsession with Cleveland Indians right-hander Danny Salazar. Looking for a prime 2014 breakout candidate? Salazar’s your guy. Wondering if Cleveland can topple stiff competition to return to the playoffs? A big year from Salazar would sure help.

Looking for the steal of the season in your fantasy baseball draft? Stay far away from Salazar.

Why? In fantasy baseball, it’s all about value. And while there can certainly be overlap between real-life value and fantasy value, you don’t want to get stuck paying more when the former corrupts the latter. When a young player starts his career with big results, we slap sky-high projections on him almost immediately. That’s happened with Salazar, a 24-year-old flamethrower with three plus pitches who dazzled in his first stint in the big leagues. Salazar’s made only 10 MLB starts, but if a rival general manager approached Indians GM Chris Antonetti about him, that other GM would be laughed out of the room or asked to sacrifice 19 prospects and his firstborn child. Salazar’s late-2013 emergence means he’s also demanding a similar price in the fantasy realm, and it’s simply too much, too soon.

In the 18-team mixed league auction I held last week, Salazar was the 50th player nominated. By that point, players like Mike Trout, Miguel Cabrera, and Clayton Kershaw had long gone (at gigantic prices), so it was reasonable to assume that, even given the very deep format, bidding would start to calm down, especially for a pitcher with such little experience. Turns out, not so much. Salazar’s nomination set off a bidding war, which ended with him going for $17 — more than highly skilled and established pitchers like Cole Hamels, Doug Fister, and Mat Latos went for, and the same amount James Shields and Matt Cain cost. When the bidding soars that high, fantasy owners are beating most of the upside out of a potential breakout player like Salazar. Now, instead of hoping for a solid improvement and dreaming of a top-30 finish among starting pitchers, the guy who owns Salazar in my league needs him to hit that second level to bank a profit.

Of course, Salazar is just one victim of spring hype. Depending on the proclivities of your league mates and the ebbs and flows of your auction or draft, you might need to exercise a similar level of caution in regard to his many peers. Gerrit Cole (who went for $17 in that same 18-team mixed league auction), Michael Wacha ($14), Sonny Gray ($12), and Zack Wheeler ($9) are also wildly talented pitchers entering their first full big league seasons, and while they boast tons of skill, they’re only worth pursuing if the price is right. Given their exposure and their prices, there’s also no real scenario in which you can call them “sleepers.”

Avoiding overhyped players is a pillar of the strategy/non-strategy I’ve employed in every fantasy league since 1991: the I Don’t Give A Crap (IDGAC) plan. I’ve written about IDGAC before, so here’s the elevator pitch: Don’t obsess over any one strategy, be it loading up on offense and going cheap on pitching, buying certain target players at any cost, punting saves to preserve money for other uses, or anything else. The only thing you should care about is value. Get enough players for less than they’re actually worth, whether in a draft or auction format, and you’ll give yourself a great chance to win. Determining what actually constitutes a value pick might take a little work, especially if you’re in an extremely competitive league. But for the most part, ESPN and other sites that offer fantasy baseball coverage and player projections tend to pump out fairly similar numbers. Pick the projection system you like best, then aim to turn as many profits as you can on draft day. Beyond that, it’s IDGAC all the way.

Of course, agnosticism goes only so far in a fantasy baseball advice column. So while you’ll still need to be ready to adjust based on what’s actually happening in your draft, here are four potential sources of value to exploit this draft season.

(Click here for all of Grantland’s 2014 MLB preview coverage.)

Google “Matthew Berry never,” and Google will autocomplete to “pay for saves.”1 Every year in his draft-day manifesto, Berry makes “never pay for saves” one of his main pieces of advice. There’s sound logic behind this recommendation. For one thing, Berry tends to tailor his (excellent) columns primarily to players in 10-team mixed leagues, since that’s the most common format in ESPN’s fantasy game. In leagues that shallow, saves can be really easy to find, with some owners even cutting closers loose after three or four blowups.

However, the saves-punting recommendations have become so pervasive that many fantasy players now go overboard, ignoring saves in deeper leagues where closers and the setup men who project as closers-in-waiting get snatched up. The end result is a markdown on saves, from less than $20 for certain top-tier options (Aroldis Chapman went for $17 in my 18-team league) to single-digit prices for second-tier closers who could nonetheless notch 30-plus saves (like Jonathan Papelbon, Fernando Rodney, Huston Street, Steve Cishek, Tommy Hunter, Nate Jones, Jose Veras, and LaTroy Hawkins/Rex Brothers, with the Rockies tandem going for less than $10 combined).

Punting on saves will seem like a great strategy right up to the moment when you realize you’re going to get one or two points in the category and fail to make up enough ground with the rest of your roster to cover your closers’ weakness. So if you’ve got Chapman valued at $24 and he’s sitting there waiting to be had at $17, you should pounce. If you hate Papelbon’s dipping fastball velocity and general Papelbonness at the $14-$15 range, you still can’t turn him down at $9. And if you end up going so value-crazy on closers that you land more than you need, that’s a pro, not a con. Wait until the inevitable saves desperation starts to wash over the rest of your league, then trade your excess closers at top-of-the-market prices, thus netting a profit.

Over at RotoWire, Jason Collette wrote a great blog post about the perils of drafting Billy Hamilton this year. It’s not just that Hamilton is going for a tick or two less than $30 in competitive leagues despite having just 22 MLB plate appearances, boasting literally no power, and maybe not being able to hit a lick. It’s also that he’s such an extreme player that drafting him means tailoring your entire strategy around his presence. Many fantasy players who draft Hamilton will feel confident they’ve locked up steals, thus ignoring speed the rest of the way; if Hamilton goes bust, however, they’ll be near locks to finish last in their leagues in the category they thought they had.

While Hamilton requires a pretty penny and brings considerable risk, though, cheap steals remain available in most leagues. That value might stem from a leaguewide overreaction to a down year; in my 18-team league, Michael Bourn went for $11 largely because he stole “only” 23 bases last year, even though he averaged 51 steals per year over the previous five seasons, making 2013 look like an outlier. That value could also come from playing-time concerns; Rajai Davis went for just $4 while projected as the lesser half of Detroit’s left-field platoon, but since that time, Andy Dirks’s back injury has made Davis the starter. Davis, who in the past stole lots of bases in a part-time role (including 34 swipes over 338 plate appearances in 2011 and 45 in 360 last year), already looked like a value, and now he looks like an even bigger bargain.

People overpay for power and underpay for steals. It happens every year, no matter the league format. Take advantage. 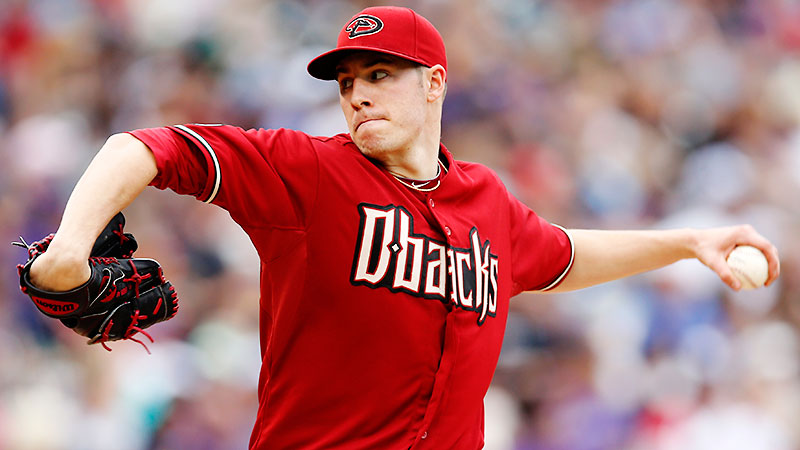 One area in which fantasy pundits and run-of-the-mill fantasy players alike deserve credit is their tendency to scrutinize surprise seasons. If a player who wasn’t very highly regarded posts big numbers, a healthy amount of skepticism sets in, and the prevailing thinking is that regression will occur the following season. Still, even that appropriate impulse can go too far. While some breakouts are impossible to replicate, it’s also possible that some of the seasons we label as flukes are actually very good years from players who’d simply been underrated to that point. Baseball America’s top-10 prospects aren’t the only guys who can flourish in the big leagues.

Patrick Corbin fits this profile well. Corbin, who had been overshadowed in the past by fellow Diamondbacks prospects Tyler Skaggs and Trevor Bauer, and who’s still being overshadowed now by phenom Archie Bradley, was Arizona’s clear ace in 2013. This wasn’t a case of impressive fantasy stats with lousy peripherals, either: Corbin won 14 games with a 3.41 ERA (while pitching in a hitter-friendly park), but posted a strikeout-to-walk rate of better than 3-to-1 and other strong supported stats that netted a 3.43 FIP and 3.48 xFIP. That’s about as little deviation as possible between runs allowed and expected runs allowed for a pitcher who fired 208⅓ innings.

Despite that strong 2013 campaign, Corbin went for just $10 in our 18-team mixed league. While his name came up relatively late, it was still jarring to see him go for the same amount or even less than players like Mark Teixeira (who lacks a functional right wrist), R.A. Dickey (his 2013 season wasn’t so fresh, and there’s real concern about his ability to handle AL East competition), and Josh Willingham (we’re using OBP instead of AVG in this 5×5 league, so Willingham’s walk-heavy profile has more value … but still). Be wary of regression candidates, but likewise, be prepared to identify guys like Corbin who might actually have had legitimate performances, and then pounce if they emerge as value buys.

There’s nothing sexy about thirtysomething players who are past their prime.2 There’s little upside and no breakout potential, and on a visceral level, it’s just way more fun to draft Starling Marte or Xander Bogaerts and fantasize over gigantic seasons that may or may not happen. But value is value.

By all means, bake some minor decline into your projection for the 32-year-old starter who’s lost a bit off his fastball or the 33-year-old outfielder who’s no longer a shoo-in All-Star. Just don’t overlook the veterans who can be had for three or four bucks less than their sticker price. Nick Swisher, Tim Hudson, Chase Utley, and Jimmy Rollins might be boring … but they’ll also very possibly be profitable.

One Last Piece of Advice

You know how you’re supposed to wait a few weeks into the season before making significant moves, so you’re sure you know what you have? Well, that’s a load of hot garbage. Projection systems aren’t perfect, but they’re a strong enough proxy for future performance that you can at least estimate where your team might end up, especially if you’re in a rotisserie-style league. If you see a deal that could help your team, you should act, no matter what the calendar says.

For years, I’ve carried the reputation of being the last owner to successfully bid on a player at auction, and the first owner to make a trade. That’s no surprise, because a value-based approach often means drafting a roster that might have a weakness or two, since it was constructed based on value rather than areas of need. This year, I waited all the way until March 2 to make a deal. What’s more, the trade involved sending away the cover boy of last week’s breakouts piece, Ivan Nova, whom I love this year.