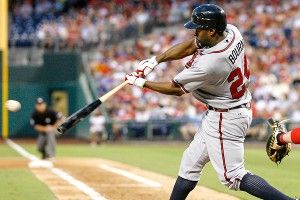 In baseball, a win is a win … except when it’s more than a win.

One extra victory for a 100-loss team will mean virtually nothing, little added revenue, no better hope for a playoff chance. The same goes for a 100-win team: In today’s 10-team playoff system, sweating over win number 101 or 102 makes little sense, since you’re almost certainly in the playoffs, probably winning your division, and most likely claiming home-field advantage throughout if you reach triple digits.

There is, however, a sweet spot for wins, where each one added to a team’s ledger greatly improves the odds of a playoff berth. That sweet spot changes every year. In 2012, the two playoff teams that won the fewest games were the NL wild-card winning Cardinals and AL Central champion Tigers, cracking the postseason with 88 wins apiece. So all else being equal, an 89th win for the wild-card runner-up Dodgers or AL Central second-place White Sox would’ve carried an extraordinary amount of weight.

Vince Gennaro wrote an excellent primer on this concept, known as the win curve, back in 2007. A snippet:

A team’s location on the win-curve — their absolute level of wins — has a dramatic impact on the value of a win. To understand the power of the win-curve location, you only have to look as far as the marginal revenue of a Twins team in playoff contention. A five-win improvement for financially challenged Minnesota, from 86 wins to 91 wins, would yield $6.8 million in incremental revenue. When comparing this revenue estimate with teams who are striving for respectability (78- to 83-win category), their marginal revenue is greater than all teams except the Mets. The location on the win-curve is so important that it often trumps market size as the key driver of a team’s marginal revenue opportunity.

Now that we have a better understanding of what the win curve is, we should examine what teams can do about it. If this were Labor Day, the answer is: Not a hell of a lot, beyond simply playing better. Fortunately we’re in late January, not early September. And while Zack Greinke, Josh Hamilton, and other big-ticket players have landed on new teams, there’s still some attractive talent out there, both on the free-agent and trade markets. Michael Bourn, Kyle Lohse, and others would help all 30 teams in one way or another. But by focusing on teams projected to land at the most critical area of the win curve, we can find the potential buyers who’d benefit most from some aggressive last-minute shopping.

Let’s start by calling out those teams that, as currently constructed, project to land in the sweet spot. For the purpose of this exercise, we’ll target teams pegged for 85 to 90 wins; in 2012 terms, adding a two-, three-, or four-win player to a team in that range would have meant either contending for or winning a wild-card spot, or even a couple of the weaker divisions. Dan Szymborski’s ZiPS system has crunched the numbers, finding seven teams projected to win 85 to 90 games right now. They are:

Add the Rangers (91 wins) and Angels (92) and you’ve got nine good but not quite great ball clubs that could be in the thick of playoff races this season.

Caveats abound. No projection system is perfect, and a lot’s likely to happen between now and Opening Day — not just free-agent signings and trades, but also injuries, role changes, and top prospects tearing up spring training and cracking the big league roster sooner than expected. Last year, the Marlins were expected to be a stronger contender after an offseason that bagged Jose Reyes, Mark Buehrle, and others … instead, they stunk. The Orioles and A’s were projected to rank among the worst teams in baseball … both had Cinderella seasons that led to wildly unlikely playoff runs. Still, by using this list as a rough guide, then looking at these teams’ needs, we can get a sense for the best potential fits for the best remaining free agents and trade chips out there.

The best remaining free agent among position players is Michael Bourn. The 30-year-old center fielder hit a fairly modest .274/.348/.391 in 2012 for the Braves. He also played Gold Glove–caliber defense and ran the bases better than nearly every other player in the game. Using FanGraphs’ Fielding Runs and Baserunning Runs, Bourn was worth about three wins above replacement last year before he ever picked up a bat, and about six wins overall. ZiPS foresees some regression for Bourn, with a hypothetical projection of .268/.333/.373 if he stays in Atlanta. The Braves are in fact looking for an outfielder who would allow them to move Martin Prado to third base. But after spending $75 million to fill the center-field job with B.J. Upton, Bourn’s probably not coming back, unless the compensatory draft pick that teams would have to give up to sign him has caused the market for his services to collapse.

So where might Bourn end up? Tampa Bay would seem a logical fit. ZiPS sees the Rays as the second-best team in the East right now (trailing only the Jays), as well as a wild-card contender. The Rays have also reportedly sought a center fielder who’d keep Desmond Jennings in left field and improve the team’s defense, which already figures to be better than it was last year, with Evan Longoria back and Yunel Escobar and James Loney likely to shore up the infield. Their projected payroll sits around $55 million to $60 million, which even by conservative estimates would be less than what Tampa Bay racks up in revenue sharing and central fund contributions alone. On the other hand, the Rays have also made the playoffs in three of the past five seasons, and come close in the other two, running extremely thrifty payrolls. They’ve also got newly acquired Wil Myers waiting in the wings to claim a starting outfield spot, would be loath to sacrifice a high draft pick, and could opt to sign a much cheaper bounce-back candidate like Travis Hafner as a DH, rather than breaking the bank for an outfielder.

The most likely suitor might end being Texas. The Rangers figure to be in another dogfight in the AL West, with the Angels much improved and the young A’s well positioned to contend again. Even with the signings of A.J. Pierzynski and Lance Berkman, the lineup’s diminished, with Hamilton and Mike Napoli (as well as the fading Michael Young) gone. Projected starting center fielder Leonys Martin is untested as an everyday player, Berkman’s a soon-to-be-37-year-old injury risk, and David Murphy’s big 2012 season runs counter to the five years of prior evidence that suggest he’s a below-average player who shouldn’t be starting in a corner outfield spot for a World Series contender. The Rangers could be the best fit for Bourn, though they’d likely benefit far more from his speed and defense than from his bat; ZiPS pegs Bourn at .272/.334/.367 if he lands in Texas.

Going by ZiPS’s outlook, he might be worth the risk. For instance, with injuries clouding Chad Billingsley’s immediate future, Aaron Harang more of a stopgap option, and the Dodgers reaching agreement with Time Warner on a new TV deal that could be worth $7 billion to $8 billion, throwing a few bucks at Lohse would make a ton of sense. ZiPS’s projection for Lohse if he lands in L.A.? 170⅓ innings pitched, a 3.35 ERA, and a 111 ERA+. A sleeper contender for Lohse’s services could be the team that just benefited from his performance spike, the Cardinals. Though St. Louis owns one of the deepest rotations in the game, as well as several young arms who could step in if injuries hit, the Cardinals also rank as one of the win-curve sweet-spot teams, and don’t have many gaping holes elsewhere on the roster. If no one else will give Lohse a lucrative, multi-year deal and forfeit a pick, something like a one-year, $15 million offer to come back to St. Louis could work for both parties.

Of the other names still out there, keep an eye on Scott Hairston. He and Cody Ross aren’t far off in terms of skill sets, except Hairston’s likely to come much cheaper than the three years and $26 million it took the Diamondbacks to sign Ross. The Yankees, Braves, and Rays could all use a right-handed hitter with power, and ZiPS sees Hairston hitting .252/.301/.450 in 2013, making him roughly a league-average hitter. If either team used Hairston judiciously and played him almost exclusively against left-handed pitching, the results could be better than that: He’s a career .276/.325/.500 hitter vs. southpaws.

Ross’s signing in Arizona likely sets the stage for a trade, too, and that’s where things could get interesting. ZiPS projects the following lines for potential D-backs trade chip Jason Kubel, depending on where he lands:

As with Hairston, these might be conservative projections, assuming Kubel’s new team gets the most out of his talents; he’s a career .279/.343/.498 hitter vs. righties.

Finally, there’s the player who probably stays put but would be wildly intriguing if he were to go: Justin Upton. The reluctance of the Rangers and other clubs to pay a marquee price for Upton means the most likely scenario would have Arizona hanging onto him, at least for now. If he were to go elsewhere, though, the results could be huge. Though a thumb injury deadened his 2012 production, Upton’s just a year removed from a season in which he hit .289/.369/.529, with 75 extra-base hits. ZiPS sees him hitting .275/.355/.470 if he stays with the Diamondbacks (118 OPS+) and projects slightly lesser numbers if he lands in Texas, the Braves get him to pair with his brother, or the Tigers hypnotize Kevin Towers and convince him that Nick Castellanos, Rick Porcello, and parts make a trade worth his while.

All those projections may well turn out to be criminally low too. Upton’s just 25 years old, may not have hit his prime yet, and is signed for just $38 million over the next three years. If any on-the-cusp team were to land Upton, that alone could be enough to swing a pennant race.

Video: Wilbon and Simmons on the NBA All-Star Starters