They Call Him Bloodsport: James Johnson Kicks His Way Into the NBA 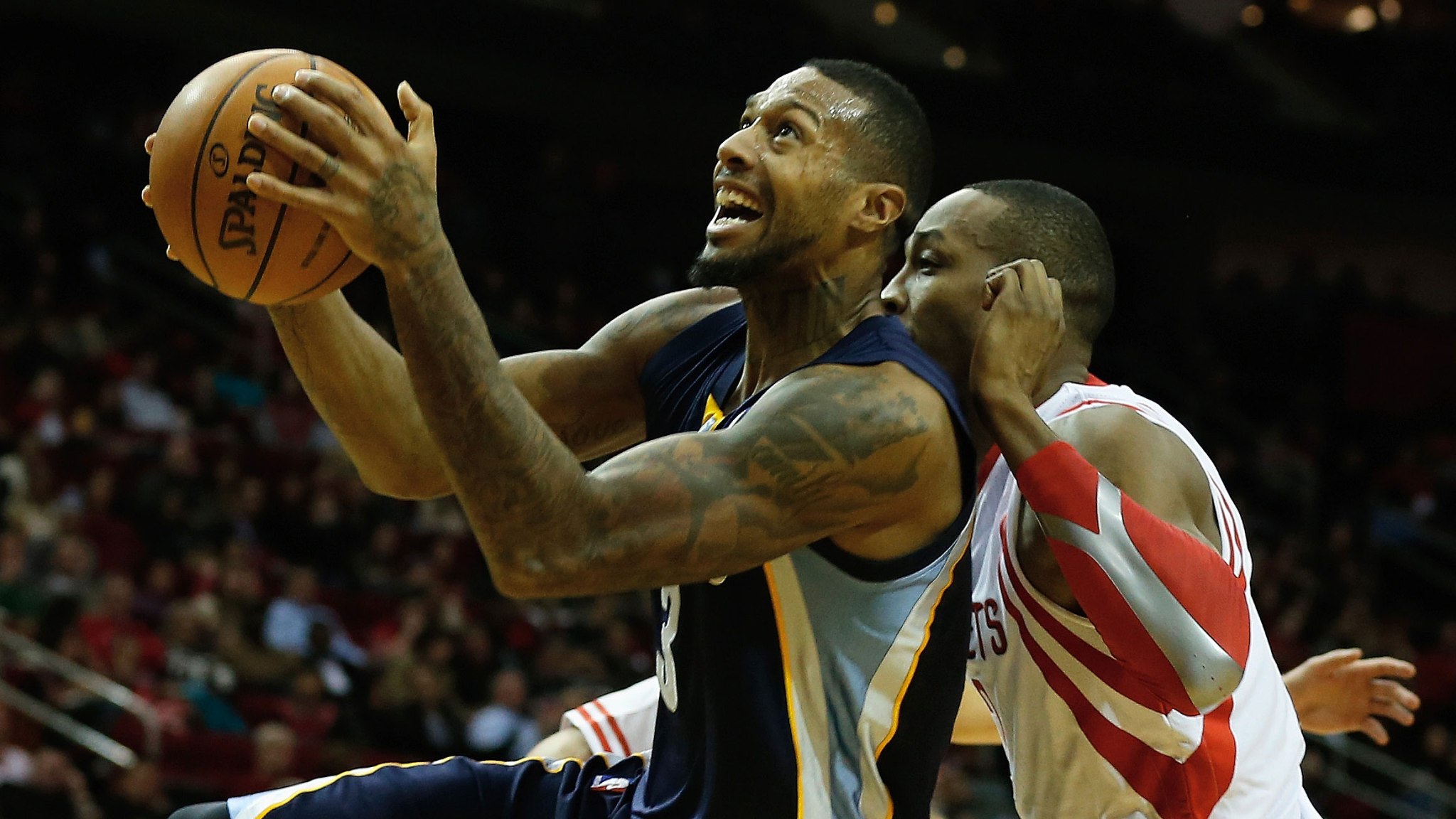 There’s a lot to like about Memphis Grizzlies forward James Johnson. He’s dabbled in some delightful hairstyles over the years. He is found gold in fantasy basketball leagues, serving as something of a caulking gun, admirably filling the gaps in your hilariously one-dimensional lineup. He’s a different, refreshing breed of Irrational Confidence Guy: one who, given enough time on the court, has a tendency to overstep his bounds by going into a full-on LeBron James impression, which has gotten him into some trouble with his former teams. While he’s a solid two-way player, when he’s completely locked in, his one-on-one defense can be more mesmerizing than his versatile offensive game. No steal is too improbable; no block is out of the realm of possibility. Defense is an essential part of Johnson’s identity — as a basketball player, as a person.

According to James Johnson’s player page on Basketball-Reference.com, his nickname is Bloodsport. He was christened thus by NBA blogger Jared Wade nearly five years ago. Johnson wasn’t aware of the moniker until we talked over the phone. “That’s funny,” he said. “Yeah, I love it. You know, anything other than ‘scrub’ is cool with me.”

Not that we needed his blessing, but now that we have it, let’s go with Bloodsport. It might be the most appropriate nickname in the league.

Johnson comes from a clan of warriors. His parents are black belts. He has eight siblings, and they are also all black belts of varying degrees. His youngest sister, about 10 years his junior, is working toward her third degree. He’s a second-degree black belt himself. His first MMA bout came at the age of 18. Johnson was declared the winner after 97 seconds. He’s fought a total of seven MMA matches and is undefeated. He’s 20-0 in all his kickboxing matches.

From afar, it looks like there’s a crown of bones bracing Johnson’s neck, or maybe it’s the Monster energy drink logo. Closer up, it’s easier to notice the lettering. His neck tattoo spells out NAYMIN, the name of his 10-month-old son, the muse who has inspired Johnson’s latest turnaround. Naymin is entering the first stages of learning how to walk, but that hasn’t stopped Johnson from thinking ahead. “What martial arts did for me growing up — in life, in school, and athletics — I feel like that’s the only thing that I’m going to force Naymin to do,” Johnson said. “I think I’m going to put my foot down strong on that.”

For Johnson, martial arts are an heirloom; basketball is his labor of love. Just as he couldn’t keep his two loves from cross-pollinating, he couldn’t keep his history of (organized and regulated!) violence from following him every step of his basketball career. He accepted an offer to attend Wake Forest in 2006 alongside fellow blue-chipper Jeff Teague. A year later, Chris Paul invited the two to his house in North Carolina. There, he prodded Johnson about his martial arts prowess. Johnson talked about the skepticism so many people express about his talents. It usually sounds something like this: “Oh, you’re 6-7, 6-8, and you’re a martial artist? Well, let me see something. I bet you can’t kick my face.”

A millimeter, a centimeter, an inch or two — that was all that stood between Paul and certain decapitation. “I swept it by his face a little bit,” Johnson said, describing a roundhouse kick as nonchalantly as humanly possible. Paul became a believer, but presumably not before seeing his entire life flash before his eyes. Apparently Paul hasn’t brought up the incident, nor does he flinch when he sees Johnson on the court. “He knows there’s nothing to be worried about,” Johnson said.

The legend followed him to the NBA. In 2010, the Bulls stayed at the infamously, allegedly haunted Skirvin Hotel while in Oklahoma City to face the Thunder. Derrick Rose and Taj Gibson felt the presence of ghosts. Rose was terrified and wasn’t too proud to admit it. He chose to room with Johnson that night.

The following year, Johnson, then a member of the Toronto Raptors, was presented a challenge. Three balls were lodged in the nets during a practice. Ed Davis and Jerryd Bayless struck upon the brilliant idea of having Johnson knock the balls loose with his feet. He accepted and aimed a spinning heel kick right at the rim. His foot hit rim while dislodging the balls. He’s 6-foot-8, nearly 250 pounds, built like a bear on a juice cleanse. There is no footage of this, and unless you’ve spent an entire childhood mastering the ins and outs of Street Fighter II, your imagination will almost certainly fall short rendering it.

As fate would have it, Johnson, Davis, and Bayless reunited, albeit briefly, in Memphis this season, before an early January trade sent Bayless to the Boston Celtics. When the team announced it was calling Johnson up from the D-League, Davis and Bayless wasted no time spreading the word about Johnson’s abilities. Their mythmaking had unintended consequences. “I have not demonstrated any moves to any Memphis players, because I already had them two see me do that,” Johnson said. “They’ve seen it live and with their own two eyes, so when I got here, everybody knew about it already.” Despite many requests, he hasn’t shown his Grizzlies teammates anything. So the legend grows.

Since Johnson was called up from the D-League in December, Memphis is 12-7, 8-2 in their last 10 games. When Johnson is on the court, the Grizzlies are allowing about 100 points per 100 possessions, a defensive rating that would nestle them right into a top-five ranking. He’s taken their mantra and he’s internalized it, embodied it. The thing about grit and grind is, it’s double-edged. The Grizzlies had been worn dull earlier in the season. Johnson’s been the honing steel. Take the final possession of last Friday’s game against the Rockets. Johnson was tasked with guarding Chandler Parsons, who had incinerated the Grizzlies in the second half. He bodied Parsons out on the perimeter, all the while dancing along to his rhythm in mirrored strides.

“I know what my steps are. I know how fast I can get to a position, and sometimes it might look like they might have an open lane, but I know I can get there in two steps, three steps. That’s just a lot of bobbing and weaving on my end,” Johnson said. “In martial arts, you have to do a lot of countering. You have to be somewhere one time and not be there the next. That determines whether you’re going to get knocked out or you’re going to win the fight.”

Parsons was cloaked with time running out, and was forced to pass the ball to Patrick Beverley, who missed a last-second attempt. Johnson sealed the victory.

Johnson plans to work toward a third degree on his black belt eventually, but it might not come anytime soon. He trains with his father every summer, but foresees more time being spent with the Grizzlies training staff, getting in the best basketball shape possible. The trainers let him get a few rounds on the speed bag to keep his punches sharp, but it’s not quite the same as complete immersion. “If I was to go back to the dojo and train a little bit, that’ll get me my third,” Johnson said. “I’ve got to start from scratch again, learn all my katas from the beginning level, all the way back up to the black-belt level before I’ll feel like I’m ready to be promoted again.”

Kata is the form, or system of motions and techniques, that governs the art. Through repetition, motions become more fluid and reflexive, allowing for greater degrees of adaptability while staying within the framework. Starting over from square one isn’t a punishment; it’s a means of purification. Johnson took all the lessons he’s learned and mistakes he’s made in his five-year NBA career down to the D-League and reemerged with a more promising vision of his future. It’ll take time to reaffirm his status as a black belt, but he knows how to fight his way back to a place he belongs.