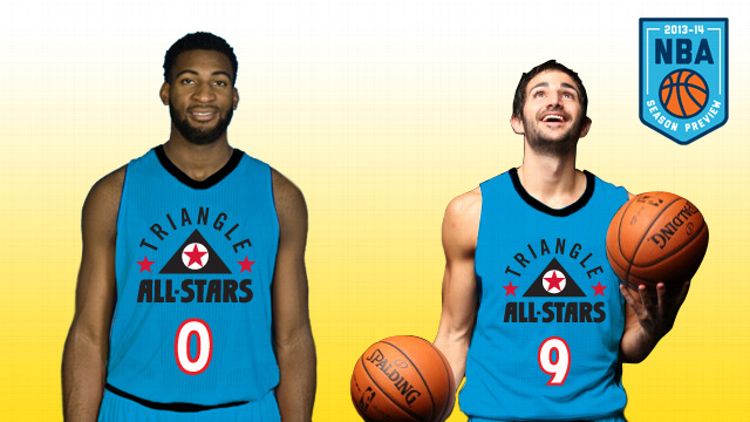 Yesterday, we kicked off the Triangle NBA All-Stars, celebrating the players we love way too much. The first two members were John Wall and DeMarcus Cousins. Today we welcome Andre Drummond and Ricky Rubio to the team. Squad up!

Why We Love Him: Nobody has any idea what to make of Andre Drummond. He played only 20 minutes per game for Detroit last year, but the Drummond glimpses we saw were kind of unbelievable. His per-48 numbers: 18.4 points, 17.6 rebounds, 3.7 blocks, .608 shooting. If you stare at those numbers long enough, he starts to look like the next Kevin Garnett. On the other hand … Anthony Randolph once built years of hype on the strength of per-48 numbers, so, you know. You never know.

But we know. The Triangle knows.

Andre Drummond is a monster. Born from fire and sent to earth to alley-oop you into oblivion. He is a keystone member of America’s team. He will miss thousands of free throws this year (37 percent from the line last year), only to grab his own rebounds and dunk on your entire team’s frontcourt. He is Amar’e before the knee injury. He is Biggie before Ready to Die. He is Francis Ford Coppola in 1972 and this season is his Godfather. There will be bodies everywhere when Andre Drummond is finished this year. The whole league is getting baptized starting in two weeks. Do you believe in God and LeBron James the Almighty Creator of Heaven and Earth? No, sorry, I believe in Andre Drummond.

Why Some People Don’t: He really is a horrible free throw shooter, he fouls too much, and while there’s definitely the potential for him to become the NBA’s next dominant big man, he’s still far away enough so that some sad, helpless souls may insist on controlling the expectations a little bit. Other sad humans may spend their time worrying about the Pistons’ frontcourt spacing this year. Whatever, man.

Anecdote That Only Makes Us Love Him More: How many can we choose?

• He and Jennette McCurdy gave us the Greatest Love Story of Our Time.

• He gave this little kid all of his arcade tickets.

The more you learn about Andre Drummond, the better he gets.

Video or GIF Evidence of His Supremacy: This video is an extended simulation of what Andre Drummond did to Orlando summer league this year. He was Puff Daddy and Godzilla at the same time.

Additionally, Jesus Christ is here to save the Pistons.

Favorite Offseason Instagram: Really though, we have no idea whether Dre is still dating Nickelodeon’s Jennette McCurdy after he used Instagram and Woman Crush Wednesdays to win her heart, but they were definitely dating at one point, and it remains the best story of the NBA offseason this year. Maybe any year.

Why We Love Him: Nobody plays with Rubio’s sheer sense of possibility. On any given night, in a half-asleep Target Center, during an unimportant possession, when nobody — even his own team — is expecting it, Rubio can summon industrial light and magic with the flick of his right wrist.

Ricky was one of the most hyped players to enter the league in the last decade. I remember reading comparisons to Magic, Pistol Pete, Steve Nash, and even Scottie Pippen. But Ricky is kind of his own genre.

Rubio makes passes that most guards just don’t make. Maybe it’s because they don’t have the imagination. Or maybe it’s been drilled out of them to ever try anything that flashy in an actual game. Or probably it’s because they suck at going halfway around their backs, bringing it back, and no-look bounce-passing to a guy standing in the corner. If they ever do try to pull one of these out of their hip pockets, there’s a very good possibility it will result in a turnover, wind up in the third row, and get them hooked from the game.

That one time you threw a perfectly weighted, no-look alley-oop pass diagonally across the floor from half court? Ricky Rubio has that with Greek yogurt and an Odwalla drink for breakfast.

Then there are all the in-traffic passes he makes while being double-covered that dudes should only be able to execute if they’re wearing a Batman utility belt. Like … what is this?

And the crazy thing is, it’s not like defenders really have to respect his shot! We’re talking a 35 percent shooter here! And he still jerks two or three defenders, goes behind his back, and swags out on all these dummies. They don’t even have controller shortcuts for moves like that in video games.

If all the passing isn’t enough (yo, the passing should be enough), or if you feel like he’s way too flashy (dude), then there’s always this guy’s palpable, unconditional love of playing basketball. This dude is up in the land of frozen lakes trying to make Dante Cunningham into a viable NBA player, but if you were just watching his body language you’d think he was living in 1980s L.A., running Showtime and dating Dyan Cannon.

Why Some People Don’t: They hate life.

Anecdote/Moment That Only Makes Us Love Him More: Copping 500 Minnesota Lynx tickets with Kevin Love, giving them away to fans, and showing up at the game looking like he just stepped out of a hot yoga class and had hit up Robeks on his way to the Target Center.

Video or GIF Evidence of His Supremacy

Ricky Rubio playing with the Yao-McGrady Rockets would have been the most beautiful thing in this world.

Final Word/2013-14 Prediction: If he can stay healthy, this is a leap year for Rubio. We treat everyone like they’re supposed to have the recuperative capability of Wolverine these days, but it’s important to remember that Rubio spent most of last year trying to get his mojo back after his tough 2011 knee injury. Now, he’s apparently “jumping like [he] was jumping before.”

Not only is Rubio as healthy as he’s been in two seasons, this is probably the best T-Wolves team he’s played on since he got to the NBA. A healthy Kevin Love is joined by Kevin Martin and Corey Brewer. Yo, Ricky Rubio and Corey Brewer running the break?! Please tip off this season right now.

Grantland NFL Podcast: The Texans and the Rest of Week 6