The 50 Best Tweets About King Karl Hess, The Notorious R.E.F. 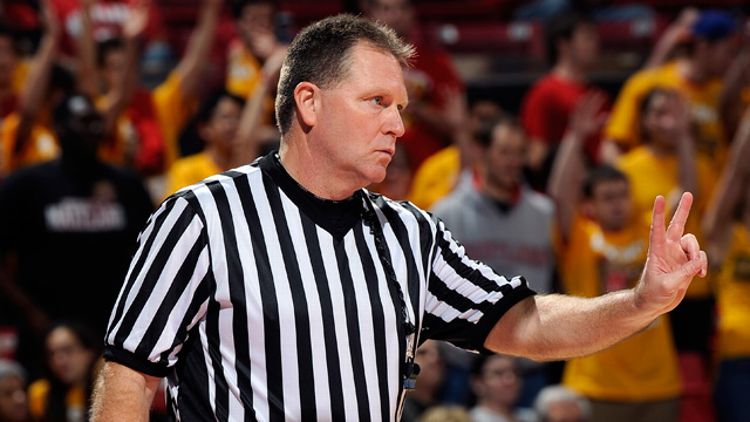 If you live in ACC country and you follow college basketball, chances are you have some strong opinions about a man named Karl Hess. And chances are, those opinions are negative. Hess is a referee (the same way that Napoleon was in the military), one that was always destined for the grandest stages and the brightest lights. Karl Hess is notorious. Karl Hess is infamous. Karl Hess is KING.

His modus operandi is simple: stealing the spotlight in any and every game he officiates, and making blatantly awful calls in huge situations. His style is so controlling and aesthetically depressing that we’re all compelled to notice the man in black and white. Now and again, he pulls off truly spectacular stunts. There was the incident in Raleigh, for instance, when he ejected N.C. State legends Tom Gugliotta and Chris Corchiani from the premises for heckling him. In that case, even the head of ACC officials admitted Hess was wrong. This year, Hess managed to line up UConn and Marquette facing the wrong direction at the start of overtime, incorrectly disallowing a UConn basket in a game Marquette would go on to win.

And then Hess (somehow) earned himself a Final Four assignment. When he took the court for Louisville–Wichita State, even I knew something amazing would happen. Cardinal fans were well aware of Hess’s legend, having watched him give Rick Pitino a technical for yelling at his own player in the Elite Eight last season. The Shockers were less familiar, but that wouldn’t last long.

At first, King Karl helped the underdogs out, combining with Les Jones to call an incredibly tight game that disrupted any possibility of flow, producing a disjointed, ugly mess, and making it difficult for Louisville to play its trademark pressing defense. (I wish we could somehow find stats for things like, “How many potential college basketball fans were lost in the first hour of Saturday’s game?”) Wichita ran up a 12-point lead with great defense and solid execution on the press break. But just when things looked really bad for the Cardinals, they made their run.

And that’s when Hess went from merely ruining the game to becoming its main attraction. It began when he called a bizarre double foul on Louisville’s Stephan Van Treese and Wichita’s Ron Baker after it looked like Van Treese hit Baker in the face. That changed the possession arrow and set the stage for Hess’s tour de force: a jump-ball call with six seconds left when Baker, his team down three, briefly lost control of the ball and tussled for perhaps three or four milliseconds with Luke Hancock before recovering it. As Gary Parrish noted, the whistle was far too quick, but nothing on the court happens so quickly that it can escape Hess’s whistle. The arrow belonged to Louisville because of the double foul, and instead of having a chance to tie with a late 3, Wichita watched Russ Smith seal the game from the line.

If the Shockers thought they could escape the wrath of King Karl, they were dead wrong. But there was a silver lining to the one-man terror show — the Twitterverse was raging against Hess all night, holding him accountable with a mix of bile, humor, and a sort of desperate, furious frustration. Here were the 50 best Hess-themed tweets of the night, starting with an incredible bit of prescient foreboding on Saturday morning.

No Dream Is So Awful That It Can’t Come True

On the biggest stage of college basketball, Karl Hess is officiating this game. Is the NCAA openly trolling with officials now? — Brendan Bures (@BrenBures) April 6, 2013

Can someone explain how Karl Hess got a Final Four assignment? Please? — Luke Jackson (@luke_jackson10) April 6, 2013

I wake up. I see that Karl Hess is a ref for the game. The stomach immediately churns. This is the Final Four. — Chris Stone (@ChrisStone01) April 6, 2013

The one thing that makes me most nervous about this game is Karl Hess. Without him, Louisville wins going away. Closer game with his help — Sue Buckner (@UofLfanatic) April 6, 2013

@insidemdsports @bowersmax Karl Hess is like the weeds in my lawn…no matter what I do, I can’t get rid of him. — Rick(@ricksterps) April 6, 2013

And the wind cried “Karl Hess” and then just called every fucking foul it could. — edsbs (@edsbs) April 6, 2013

The good news is that Louisville is going to come into the ACC with the hating Karl Hess thing already mastered. — Carolina March (@carolinamarch) April 6, 2013

The Incredible Predictive Power of Mankind

calling it now. Karl Hess will make a controversial call with less than 10 seconds to go to give one team the lead and the win — Jason Jordan (@jjordan28) April 6, 2013

I wonder how long it will take for Karl Hess to make this game about him. — Vu Pham (@vutylicious) April 6, 2013

Two minutes left. This is when the greats take over the game. Lets see what you’ve got, Karl Hess. #KingKarl — Bart Smith (@bart_smith) April 6, 2013

The way this is shaping up, the finish is playing right into the hands of Karl Hess — Ben Swain (@thedevilwolf) April 6, 2013

If Karl Hess was an NFL ref, he’d call holding on every play, against both teams. — Karl Kirkwood (@truthfromduluth) April 6, 2013

A Moment of Sympathy?

Does any ref get as much slander as Karl Hess? lmao — The Silent Assassin (@SilentAssassinM) April 6, 2013

I guess its not really surprising that Karl Hess decided the game. At least he had the teams going the right direction? — Jason (@jlublin84) April 6, 2013

What, you thought a mid-major could hang with Karl Hess? Please — Run the Floor (@RunTheFloor) April 6, 2013

Silly Wichita State, you thought you could tangle with Karl Hess and live to tell about it? — A.J Black (@BCHysteria) April 6, 2013

Tried to wrestle my wallet back from a guy who tried to steal it, but NCAA referee Karl Hess said the robber had the possession arrow! #wtf — John M. (@WhatJohnThinks) April 6, 2013

Karl Hess blew a Final Four game? He once winked at me. And had a team shoot free throws on the wrong end of the floor. Couldn’t be worse — Ryan McRae (@RyanCMcRae) April 7, 2013

World leader for a day: Karl Hess, Kim Jong Un, and a barrel of cole slaw are being strung together and launched at the Moon — Donny Andrews (@dandrews66) April 6, 2013