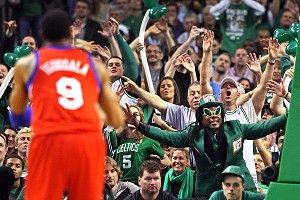 Walking down the back hallway of the TD Garden toward the media scrum arranged around Doc Rivers before Monday night’s Celtics-Sixers game feels a tiny bit like being in an unpretty NBA version of one those long Wes Anderson panning shots crammed full of highly detailed mise-en-scene and all that. Looking to the rooms on my right, there’s Chris Webber, his tie hanging loose around his neck, kibitzing with the TNT crew; Lavoy Allen, on his stomach, a trainer on top of him jerking his ankles up toward his thighs; David Aldridge and Mickael Pietrus chatting off to the side; and the Boston Globe’s Bob Ryan, trudging the other way and muttering something about how’s he gonna need an extra pen tonight, as a cameraman rolls tape while walking backwards in front of him.

At the end of the hall, Doc’s solemnly answering questions about how Avery Bradley’s shoulder, which keeps on popping out of its damn socket, will sideline him tonight. (We’ve certainly come a long way from a few months back, when just discussing the idea of Bradley starting over Ray Allen seemed ludicrous). Halfway through an answer, Doc cuts himself off. “Hey McIntyre!,” he shouts to a bearded fellow who seems to know everyone. “You look so relaxed.” “Wish I could say the same about you,” McIntyre shouts back.

On the court for shootaround, Marquis Daniels is feeding Kevin Garnett for long jumpers and Sasha Pavlovic is shagging balls, and it’s nice to know the end-of-the-bench guys have their roles, too. Dana Barros is also on the court in warm-up gear, which, to a survivor of the pre-Paul-Pierce era — when hearing Tommy Heinsohn shout out “bing bang boom!” after the most inconsequential of Barros 3s was a tiny, dumb light in the darkness — feels kind of ominous before a big swing playoff game.

In the hangar-sized space on the other side of the court, Lucky the Leprechaun is stretching out on stilts, while his acrobatics team busts out mid-air pirouettes. A high school drum line is sprawled out on the floor, and a handsome, nervous-looking guy in a three-piece suit practices his operatic take on the national anthem. A few minutes later, we learn this is “Ireland’s no. one tenor, Paul Byrom” and, while he still looks nervous, his bold take — he really goes for it with a pause on “red glaaaaaaare” — kills. Good job, Paul Byrom.

After the game, which the Celtics won handily, 101-85, I hustle back down that back hallway — past Jodie Meeks, his jersey slumped out of his shorts, and Spencer Hawes, covered mostly in a towel, both rummaging through a hot buffet in a side room — into the Celtics locker room. Pietrus cuts off his press session with an “OK, I love you guys,” then herds the scrum over to Greg Stiemsma, who is still getting dressed, and urges Comcast SportsNet’s Sherrod Blakely to ask the first question. Blakely complies, Pietrus lets out a “Yes! Sherrod!,” then turns to ask a straggling reporter his opinion on Maroon 5. Meanwhile, Stiemsma slaps on a pair of tinted D&G reading glasses, and the scrum oohs and ahhs. “Yeah, new look,” Stiemsma chuckles.

Back at the press conference podium is Brandon Bass, looking very GQ. He’s asked generous questions about whether this is the best game he’s ever had (27 points), despite the fact he’s finally contributed in a big way after a postseason slump, he stays sedate and clichéd. And then someone mentions that he had an 18-point third quarter, and Bass suddenly loosens up. “I ain’t know that,” he says, grinning. “I ain’t know that!” Then talks about the halftime speech from Keyon: “Reverend Dooling stepped up and gave us a little sermon, and let us know we had to play for each other. Second half, that’s what we decided to do.”

He says this is the first time for him on the podium, and the “first time for a lot of things for me, man, and I’m grateful. That’s why you probably see all the beads on my forehead, cause, you know, I’m a little nervous.” And he explained that his motto is “God, Grind, Greatness. Grinding is what got me to this point, and it’s what I’m gonna continue to do.” Back in the locker room, Bass tries to get to his stuff, but is cut off by the scrum, which has now wrapped Ray Allen. He let out a soft “damn,” then waits it out. It was probably the first time for him for that, too.