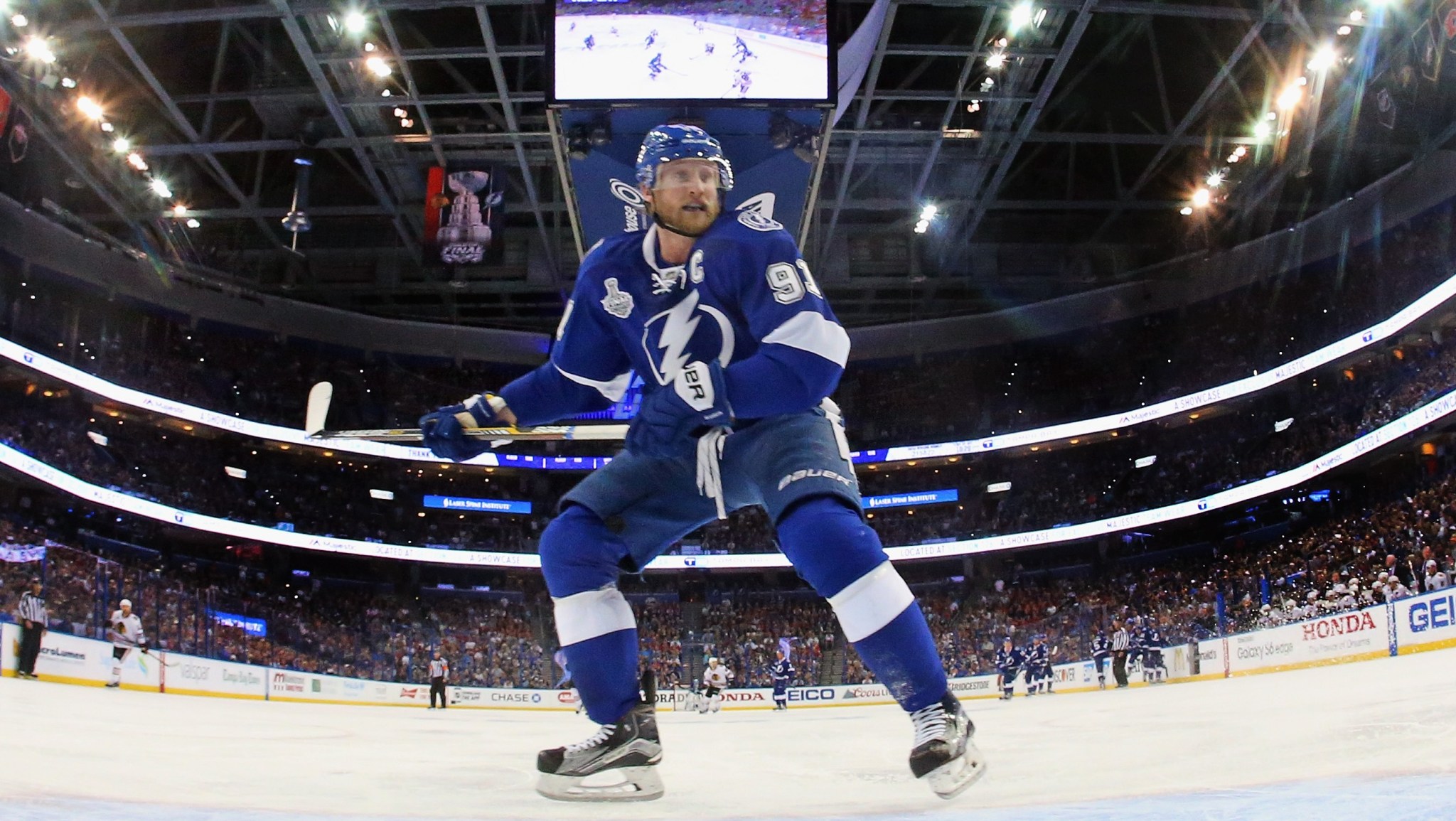 The numbers are jarring, bordering on unfair. The Chicago Blackhawks come into this final with a roster that boasts 26 Stanley Cup rings. Most of the core, including Jonathan Toews, Patrick Kane, and Duncan Keith, each have two.

The Tampa Bay Lightning, by comparison, have one. That’s it. One ring, total, from an entire roster. And that one, belonging to Valtteri Filppula, is seven years old.

This Lightning team is young. And more importantly, the core is remarkably young. The captain, Steven Stamkos, is 25. The best defenseman, Victor Hedman, is 24. The top line features Tyler Johnson and Ondrej Palat, both 24, along with Nikita Kucherov, who is 21. The starting goalie, Ben Bishop, is a comparatively ancient 28, but he’d never played a NHL playoff game until this season. The guy who has been given the task of shutting down Toews is Cedric Paquette, a 21-year-old rookie who’s so young that coach Jon Cooper didn’t even tell him about his assignment for fear of throwing him off his game.1

Total Stanley Cup final games played between the group of them, heading into Wednesday’s Game 1: zero. And they’re facing a Blackhawks team making its third trip in six years. The Lightning have never been here before; the Blackhawks practically live here. In a series in which most of the matchups are too close to call, the experience factor is a laughably one-sided mismatch.

The question is, will any of it matter?

As fans, we love the idea that experience counts, and that having been there before confers some sort of advantage. It feeds into something we want to believe about how difficult this game’s journey to a championship really is. We drone on endlessly about the Stanley Cup being the hardest trophy to win in all of sports, and if that’s really true, then it seems like something that you shouldn’t be able to do on the first try. We want to see you fail, and learn from that, and then come back older and wiser, having finally figured out how to win.

However, the Stanley Cup memories we seem to love best all play against this theme. It’s Ray Bourque finally getting his hands on the Cup after two decades. It’s the lightbulb going off for Steve Yzerman and the Red Wings. It’s the 1983 Oilers, young and cocky, getting their butts kicked by the veteran Islanders, and only then realizing how much further they had to go.

And because we love the idea so much, we tend to forget about the stories that don’t fit the narrative. We forget about the teams that skip the years of hardship and near misses and jump straight to a championship. If anything, they’re the exceptions that prove the rule.

There’s a common-sense test that kicks in here, and the experience mythos doesn’t exactly pass with flying colors. After all, how much different can playing for the Stanley Cup really be? How much can a game that most of these guys have been playing their entire lives really change — how much more can there really be to learn, simply because it’s the Cup?

Is it possible that we’ve all just been telling ourselves a story? Could any of this possibly matter as much as we want it to?

Hockey fans have argued about the subject for decades, and attempts have been made to quantify it. One recent study suggested that experience may have mattered in the pre-cap era but doesn’t seem to anymore. But maybe it’s the sort of thing that you can’t really capture with the numbers. Maybe you really do have to have been there, under the bright lights and a few million eyes, and had the chance to feel it in your gut.

Lightning defenseman Matt Carle is one of the few Tampa Bay players who has been here before, back in 2010 with the Flyers. That would seem to give him license to buy into the idea. But when he was asked about it on Wednesday, he wouldn’t take the bait.

“It’s hockey, you know? It’s the same sized ice sheet. Same building we’ve always been playing in,” Carle said. Then he gestured at a locker room packed full of media. “This is the only thing that’s really different, is how many people are in here covering the series, and the people watching. That’s all that’s different.”

“Once the puck drops, we’re just trying to play a structured system and play the way we know how … Once that puck drops, it’s playing hockey and having fun.”

Stamkos hasn’t been here before, but his words echoed Carle’s when I asked him if anything about playing in the final would feel different.

“No. It feels like another game. Once we get to the rink and feel the atmosphere, it’ll be a little different,” he said. “But once that puck drops, this group has found a way to stay composed all year long regardless of the situation we’re in, and that’s why we’ve had success.”

If we’ve learned anything yet, it’s that any eventual Lightning championship DVDs should be titled “Once That Puck Drops.”

Brenden Morrow has been here before, too, although you have to go back a long way. He made the final as a rookie with Dallas in 2000 and hasn’t been back since. He’s the oldest player on the team by far, and his 113 career playoff games are more than most of the team’s younger stars combined.

If anyone should want to buy into experience, he’s the guy, and he knows it. And yet …

“I want to say it’s a little bit overblown, even though I want to feel important for being here,” he said. “You’ve got to get experience somehow, you’ve got to win at some point. The Chicago Blackhawks have won two in the last five or six years, but they didn’t win any before that. They had to get that experience. We’re just in that stage right now.”

He’s right. Five years ago, the Blackhawks were the team that had never been there before. In 2010, they were coming off a conference final loss that had followed five straight years without so much as a playoff game. Kane and Toews were the young guys who’d never done it on the big stage. Every dynasty needs to win the first one.

The Lightning can look to their own history as well. The 2004 team that won the Cup looked an awful lot like that 2010 Blackhawks team, young and talented but just recently emerged from a long stretch of not winning anything at all. Another exception that proved the rule. Then again, you could argue, the 2010 Hawks and the 2004 Lightning were facing other teams without much experience, so somebody had to win. It wasn’t the mismatch we see playing out in this series.

And, of course, maybe Carle, Stamkos, and Morrow are biased. They’re all Lightning, after all, so they know they’re on the losing side of this equation. What else would they say? Even if they believed that their experience deficit would doom them, they couldn’t say it out loud.

So then you might want to her from a guy like Brad Richards. The veteran forward has been to the final three times, and he’s seen this question from three different angles. In 2004, he was one of the kids on that inexperienced Lightning team that won anyway. Last year, he was the veteran who’d been there before on a Rangers team that faced the experienced Kings and lost. And this year, he’s the new guy on the been-there-done-that Blackhawks. He said it’s hard to ignore the difference.

“This team’s been around. There’s no speeches about what it’s like to be in the Stanley Cup, you have to do this or do that. Everybody knows the drill,” he said. “There might be one or two players who don’t, but everyone’s pretty much on autopilot. Hopefully that will help us get into this series and get a good start.”

I asked him where, specifically, that experience might help, and he didn’t hesitate to rattle off a long list.

“All these days, knowing that you can’t get caught up in a lot of things, a lot of distractions. Getting your sleep. Eating properly. Knowing after a game not to get too excited, not to get too confident,” he told me. “After a loss you’re not eating it and taking it home with you and sleeping with it. You’re just kind of letting it go right away and preparing again. As you get through and get older, you realize how to handle those ups and down.”

That’s a convincing answer, although it’s hard not to notice that none of those things involves anything that happens during an actual game. Maybe the Lightning are on to something. Maybe all the experience can help around the margins in between games, but once the puck drops, it’s just hockey.

And then you watch Game 1, and you see it play out pretty much exactly the way a Been There Before true believer would script it out. The young Lightning came out and dominated early. They took a 1-0 lead into the late stages of the third period. And then, right on schedule, the young Lightning crumbled and the veteran Blackhawks struck for two quick goals. Minutes later, the game was over and Chicago had stolen the win. Advantage, experience.

Except … the two guys who scored for the Blackhawks, Antoine Vermette and Teuvo Teravainen, were both new Blackhawks. Teravainen is a rookie, Vermette came over at the trade deadline, and both were playing the first Stanley Cup final of their careers. They’d never been here before, either.

And so we’re left back at the beginning. This series represents a battle between one team packed with winners and rings, and one that’s trying to get there. The Blackhawks think it will matter. The Lightning don’t. And one game in, the evidence is inconclusive.

Of course, that’s probably how we fans will like it. We’ll see what we want to see, and tell ourselves the stories we want to hear. If the Lightning can come back and win, it will be because they figured it out in time, helped along by cagey veterans like Carle and Morrow. If the Blackhawks win, it will be because their experience guided the way; and the pain of witnessing it firsthand just might guide the Lightning to glory someday. Either way, we’ll figure out a way to keep the story alive.

We’re fans. This is what we do. After all, we’ve been here before.

Your 2015 MLB Draft Prospect Primer: 12 Players You Need to Know