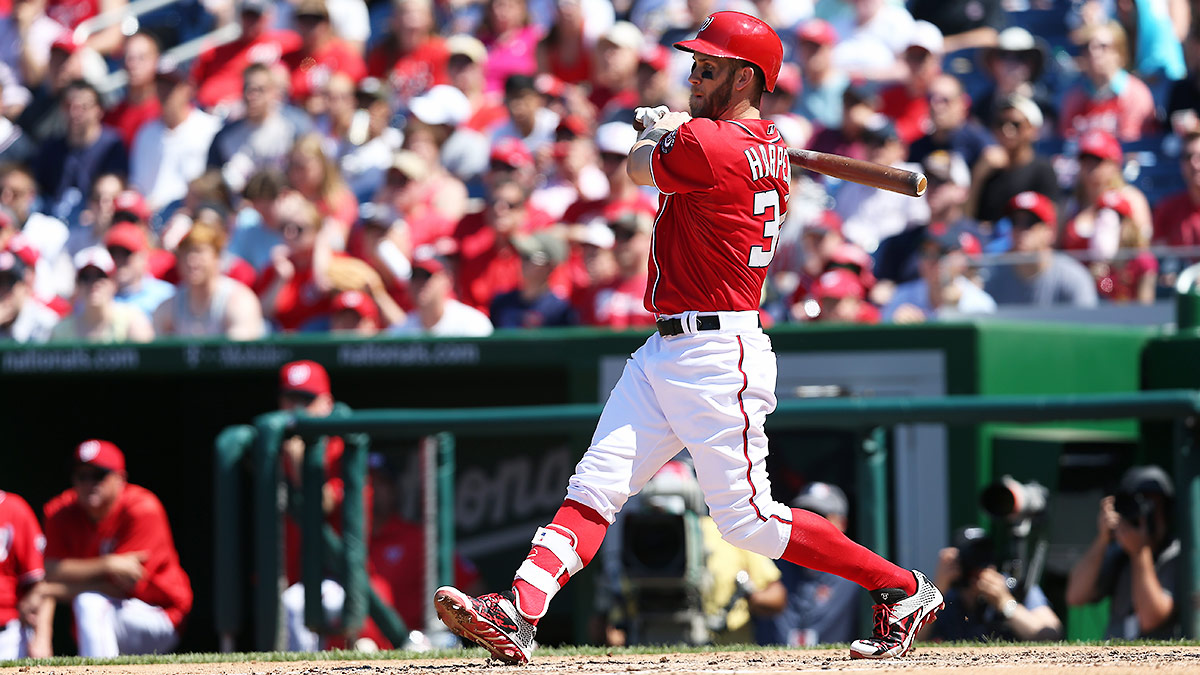 Bryce Harper, who’s leading the majors in WAR at age 22, has had a breakout season in about eight different ways. He’s become more selective, which has helped him post MLB’s best walk rate. He’s hitting more balls in the air, and pulling them more often. And he’s made mechanical adjustments that have helped him crush outside pitches and breaking balls, which used to be his bugaboos. He’s tied for the major league lead in homers, and he’s hit them to all parts of the park, launching bombs so effortlessly that he can’t help but hit them even when he thinks he’s flied out.

Harper hasn’t homered in six games, which passes for a slump in the aftermath of a month in which he homered every 6.6 at-bats. In his monster May, Harper hit .360/.495/.884 in 108 plate appearances, and he looked as locked in as any hitter we’ve seen in some time. So was his hot streak historic?

That’s a difficult question to answer: There are many ways to take a hot streak’s temperature, most of them unsatisfying. We could compare Harper’s performance to the best May showings or best performances from any month. But months are arbitrary periods that we talk about in baseball only because they’re a convenient way to split seasons into smaller parts. Hot streaks don’t conform to the calendar: A player might have a monthlong hot streak that starts and ends midway through two months, bookended by comparative cold streaks that drag down his monthly lines. Moreover, a month isn’t a unit of playing time: It might mean 50 plate appearances, or it might mean more than twice that, which would be much more impressive. And then there are the differences in offensive environment: Harper’s May slash line means more in a relatively low-scoring season like 2015 than it would have a decade ago.1 And don’t forget about ballparks — those can skew the stats, too.

Fortunately, there’s a stat that can account for all of these factors and help us figure out how hot Harper got: True Average, a Baseball Prospectus statistic that assigns a precise value to everything a player does at the plate and condenses it into a single figure, expressed on the batting average scale. The stat adjusts for both ballpark and era: League average is always .260, .300 is always excellent, and .220 always means “you’d better be good with the glove.” TAv doesn’t go back beyond 1950 — play-by-play data gets dicey before that — but for the 65-plus seasons that it covers, it’s a perfect tool to use. Ideally, we would also adjust for the quality of the pitchers faced during a streak, among other, more minor factors, but as it is, TAv gives us most of what we want.

But here’s the big breakthrough: With research assistance from BP’s Rob McQuown, we can look for the best TAv streaks over any given number of plate appearances, regardless of when they occurred on the calendar. Any streak of consecutive plate appearances is eligible, as long as all the plate appearances took place within the same season. Hot streaks that stretch across offseasons are technically continuous, but they also strain the definition of “streak,” so we’ve excluded them as counter to the spirit of the exercise.

Let’s start with streaks of 50 plate appearances, about two weeks’ worth of action for a full-time player. A player’s first PA of the season through his 50th PA of the season would be his first 50-PA streak; his second PA through his 51st PA would be his second streak, and so on. The results include a lot of overlapping streaks, since a hitter who’s on fire for one 50-PA chunk would also have a high TAv in the adjacent 50-PA sample. On the list below, I’ve filtered out those redundancies, leaving only the best of the overlapping 50-PA periods for each player. It doesn’t take long for us to hit Harper.

From May 6 through May 19 — his 122nd through 171st plate appearances of the season — Harper hit .575/.660/1.450. That’s not the biggest slash line on the list, but it’s the best by TAv, after adjusting for context: Harper played in pitchers’ parks in 10 of 13 games during the streak, in a season when scoring is close to a 25-year low. With Harper on a higher plane, the Nationals went 10-3, which wasn’t a total coincidence. Normally, it’s hard for one baseball player to carry a club, but Harper’s performance in those games was the furthest thing from normal. In that small sample alone, Harper produced 2.5 Context Neutral Wins, which isn’t hard to believe if you watched him hit six homers in three games from May 6 to May 9, the last of which was literally worth a win.

The greatness of Howard’s ’68 season, which produced the second-ranked streak, is obscured by that season’s dead-ball scoring and the size of D.C. Stadium, but TAv tells the true story: Only Willie McCovey hit better than Howard that year. Ripken was between his two MVP seasons in 1988, but he was in his physical prime at 27 and mustered his hottest streak ever. Jones described his streak as a “very awesome feeling”; Brian McCann called it “the craziest thing I’ve ever seen,” which wasn’t an exaggeration. Jones tied a record set in 1927 by recording an extra-base hit in 14 consecutive games.

Bonds had a .426 TAv for the 2004 season (which was only his third-best by that metric), so if anything, it’s somewhat surprising he doesn’t dominate this list. Then again, he was intentionally walked 120 times that season (nine of them coming during this streak, compared to Jones’s zero), which lowered his TAv relative to what it might have been had he been allowed to swing away. Mantle’s ’57 streak helped him win his second straight MVP award. Wynn went one and done on the Hall of Fame ballot, but he had a Cooperstown-caliber peak, which voters overlooked because the Astrodome suppressed offense and because Wynn stood out more in on-base percentage than in batting average. DeCinces is the most unlikely name on the list, but he’s hardly a scrub: In his first season with the Angels after an offseason trade, he won a Silver Slugger at third base and finished third in AL MVP voting. Mays makes the list for two separate streaks, separated by seven seasons.

Fifty PA is itself an arbitrary total, so we can widen our scope in 10-PA increments to see how Harper fares compared to longer streaks. Here are the top 10 streaks of 60 PA:2

In a slightly larger sample, Harper falls to third. Ryan Howard joins Frank Howard for his 58-homer MVP season, and Bench helps displace Bonds. On this list, the TAv figures are lower across the board than they were for the 50-PA stretches: The bigger the sample, the harder it is to stay hot.

At this level, Harper falls to fourth, and McCovey makes the list just behind him, as does Jim Ray Hart, a shaky fielder but a fine hitter who would’ve been a beast as a DH had he come up a little later. Mays makes it for 1960, a different season from the ones that put him on the previous lists.

Jones just barely edges out Harper’s 23-day span for the top spot, although Jones spent 15 days on the DL with an oblique strain during his streak. The only new name on the list is Sosa, who hit 17 of his 64 homers that season in August. Mays earns his highest rank yet, this time for a fourth season, 1964. For several years from the late ’50s through the mid-’60s, amazing Mays hot streaks were a common occurrence.

At 90 PA, Harper falls to the last line of the list, and Bonds sneaks on for the year when he set the single-season home run record:

At 100 PA, Harper disappears from the top 10. For now, his otherworldly streak has subsided. But the fuss we made in May was justified. Over a two-week stretch, Harper was hotter than any other baseball player has been over a span of the same playing time in the last 65-plus seasons.

Harper is one of the most hyped players in history, which will doom him to be a disappointment if he doesn’t become one of the best players in memory. I’ve got good news, though: For a while, at least, he already has.