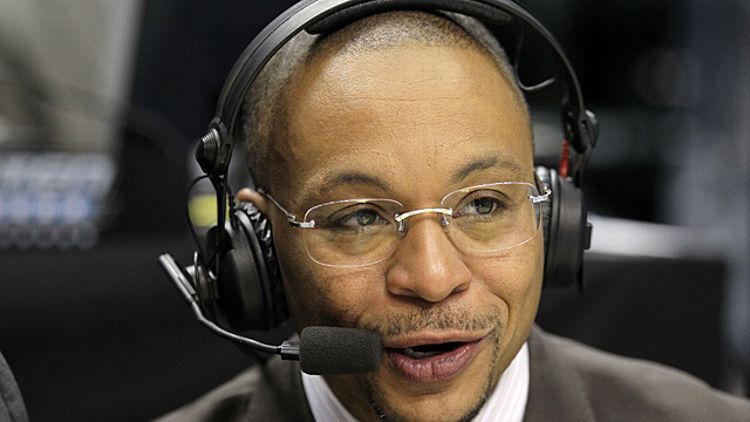 I didn’t even know where it came from. Was there an official announcement? Did someone break the news? It turned out it was Richard Deitsch. But all I knew at the time was that one minute Twitter was bubbling along peacefully and the next it had turned fluorescent purple and started belching out smoke and then helicopters were circling and a CNN anchor was talking about “spent fuel rods” and underground pools and evacuation orders. And the thing that did this to Twitter was the news that noted March Madness–intensifier and screamer of screams Gus Johnson was being groomed to be Fox Sports’s leading commentator during the 2018 World Cup.

Soccer fans were elated. Soccer fans were enraged. Soccer fans had opinions and they were airing those opinions in all caps. So the first thing to recognize about the Gus Johnson–as–World Cup–word–painter bombshell is that the reaction to the story is, to a large degree, the story. Keep in mind that we’re talking about someone who could possibly describe the action during a soccer tournament that is five and a half years away. We’re talking about the World Cup after next, a dot on a horizon that no one is even looking at yet. However: People were sincerely freaking out. That’s partially because the World Cup, any World Cup, is always a big deal. But a lot of it is that, love him or hate him, very few announcers in sports would be as galvanizing in this spot as Gus Johnson. Fox’s aim right now isn’t to make you happy or sad so much as to send an electrical current through the world of American soccer, and it worked. Outlines are jagged across the comic book of the sport.

But there’s a deeper backstory here, which is that the whole question of who should announce soccer to the American TV audience is strangely and thoroughly vexed. We’ve been burned, and burned repeatedly, by underprepared American announcers who were hustled into the booth with a PowerBar and somebody else’s notes — Dave O’Brien at the 2006 World Cup, Curt Menefee at the UEFA Champions League final — the idea being that Americans need Americans to make them feel comfortable watching soccer. This theory is condescending and stupid, leading to a counter-theory, put into practice by ESPN at the 2010 World Cup, that Americans actually want to hear experienced British announcers, who grew up with the sport and have its rhythms inscribed on their mitochondria. The problem is that while Martin Tyler and Derek Rae are great announcers, the notion that Americans need British guides to make the alien world of soccer accessible is also condescending and stupid. Save it for the Best Supporting Actor race, you know?

Anyway, the pro- and anti-Gus camps insta-divided more or less along these lines, with the Gus haters bemoaning the loss of British wisdom in favor of another hurried-into-service American (Johnson describes his current familiarity with the sport as “novice”), and the Gus fans cheering Fox’s de-eurosnobification of American soccer culture. To me, though, the bottom line here is that TV accents and what they imply about different conceptions of fandom within the subculture or whatever aren’t really worth the angst they generate. Commentators are either good or they’re not; they can either speak in complete sentences or they can’t; they’ve either got a feel for the ebb and flow of a game or they’re Phil Simms. Gus Johnson is a good commentator. He’s got five years (!) to learn his stuff, and a huge incentive to get it right (i.e., calling the world’s biggest sporting event to an audience split between total neophytes and fiercely critical diehards). He’s better than just about anyone at zooming in on pivotal moments in big games and giving fans the crazed vividness they deserve. And since we’re talking about Fox, and probably came closer than we even want to know to a Buck-Aikman tag team on Denmark–Ivory Coast, I’d say it’s fantastic that we’re getting an announcer who actually makes games more fun. I mean, how many commentators on earth are legitimately fun to listen to? Maybe 10? It’s not a list that scrolls, put it that way. One of the guys who’s on it is calling a World Cup. This is good news! Euphoric screaminess is coming our way! Be happy!

Now, who wants to sign my petition to bring in Ray Hudson to do color …