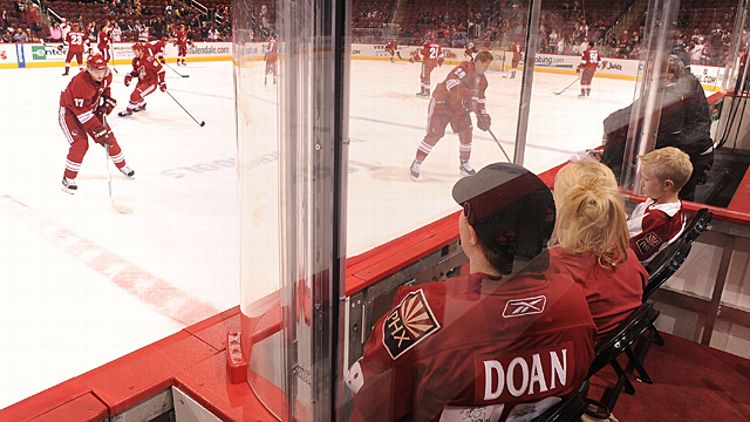 It was fitting, really, that the most recent round of bad news for the Phoenix Coyotes was released late last week. The announcement that prospective team owner Greg Jamison had failed to raise enough money to buy the unwanted franchise was made because of a January 31 deadline with the city of Glendale, Arizona, where the team’s arena was built in 2003. But really, the timing made even more sense than that. What better moment to subject everyone to such a bleakly repetitive outcome than just before Groundhog Day?

In 2009, the NHL assumed control of the Coyotes when then-owner Jerry Moyes filed for Chapter 11 bankruptcy on his team’s behalf. But the Coyotes (who were the Winnipeg Jets until they relocated south in 1996) had had significant issues almost right from the start. They played in an arena designed specially for the NBA’s Phoenix Suns, and it fit them as lumpily as someone else’s bespoke suit. (Seats hung over one end of the ice, an unsmoothable wrinkle.) The team was good enough to get to the playoffs for the first few years, but never advanced beyond the first round. The cycle of ownership shuffling began just two years after the move to Phoenix and hasn’t really stopped since. Wayne Gretzky bought a share of the team and ultimately became coach; with him behind the bench from 2005 to 2009 the Coyotes made zero appearances in the postseason. (Last year’s season preview in The Hockey News referred to a few mismanaged young players from that era as “Gretzky’s Orphans.”) When the team finally got itself a venue that properly fit, it wasn’t in downtown Phoenix. Instead, it was out to the west in Glendale, a real-estate-driven city that has lately become a touch more bust than boom.

The most common gripe about Jobing.com Arena is its location. It’s about a 45-minute drive in moderate traffic from downtown Phoenix, but it takes even longer than that for the people who live in more upscale Scottsdale or in flourishing suburban East Valley towns like Tempe, Mesa, and Chandler. To many observers, the typically sparse attendance at Coyotes games is proof that hockey can never exist in the desert and that the NHL’s foray into nontraditional markets was an ultimate failure, case closed. To Phoenix fans — and they do so exist — it’s more so just a sign of how massively inconvenient it can be to get to a damn game. The truth lies somewhere between these two points, probably out on some lonely stretch of Interstate 10, but there’s no question that when it comes to finding it, the NHL’s been a stubborn driver who refuses to ask for directions.

In the less than four years that have gone by since the NHL began propping up the Coyotes, there has been a fool’s parade of prospective new owners. When Moyes was losing money and looking to unload the team in 2009, the NHL reportedly entered into talks to sell to a group fronted by Chicago Bulls and White Sox owner Jerry Reinsdorf. But Moyes went rogue and filed for bankruptcy as part of a sub rosa plan with Blackberry magnate and serial NHL franchise tire-kicker Jim Balsillie. (It was ultimately ixnayed by the league/courts.) A consortium of guys known collectively as Ice Edge were the prospective investors of the moment circa mid-2010; a year later, Matthew Hulsizer, a businessman from the Chicago area, appeared to be on the cusp of getting a deal done — were it not for the pesky narcs at the Goldwater Institute.

On and on it goes. During the Stanley Cup playoffs last May, NHL commissioner Gary Bettman held a press conference to announce a new no-really-this-time-you-guys moneyman who would be buying the Coyotes: Jamison, a former San Jose Sharks executive. “With the group [of investors] that Greg has assembled, he’s comfortable that the financial wherewithal is there,” Bettman said at the time. In September, Coyotes captain Shane Doan, a free agent, decided to remain in Arizona, believing that the sale would go through. In November, cash-strapped Glendale’s city council voted to approve a contentious deal that would pay Jamison and his group $320 million over the next 20 years to remain in Arizona and operate Jobing.com Arena.

Things seemed to be progressing — until late December, when the Globe and Mail’s David Shoalts wrote about Jamison’s struggles to raise enough money. “One source said Jamison spent a lot of time and travel trying to attract foreign investors … particularly in the Middle East,” Shoalts wrote. All these financial infusions, these prospective suitors, everything going wrong for everyone involved … after a while, it all starts to sound like something from a upcoming season of Downton Abbey.

What’s unfortunate and almost darkly humorous about all this is that, beneath all the chaos that hangs over the franchise  like one of those personal rainclouds, the Phoenix Coyotes are actually a pretty well-run team. Flagging attendance and poor profitability often can be blamed on a poor on-ice product and/or awful owners; it wasn’t very long ago that teams like Chicago and Pittsburgh, now two of the league’s biggest (and most lucrative) darlings, were experiencing grave struggles of their own, blacking out games and threatening to move to places like Kansas City. But that’s not quite the problem in Phoenix. The Coyotes might not be the most star-powered franchise (though if Keith Yandle and Oliver Ekman-Larsson played in Toronto, they’d be beloved), but they did make the Western Conference finals last season playing under coach Dave Tippett’s defensive-minded system and buoyed by flourishing goaltender Mike Smith. General manager Don Maloney has done a remarkable job building a cohesive group of players, especially considering his team’s financial restraints. (Although hey, maybe the shackles actually help.) Still, all these positive attributes only make the situation seem that much more tangled. It would all be much less messy if the Coyotes were only much more of a mess.

It is, unsurprisingly, unclear where things go from here. The league does not appear to be wavering on its stated $170 million price for the Coyotes. Per his statement and statements from the NHL and team, Jamison’s quest for ownership is not totally dead, though now that he’s missed the deadline for the sweetheart deal with Glendale, it’s hard to see how he’d suddenly find more people willing to chip in. Four of the seven city council members who voted in November are no longer serving, and new Glendale mayor Jerry Weiers didn’t sound like he’d exactly be leading a charge to freshen up the deal. “When someone calls 911, they don’t want a Zamboni to show up; they want a firetruck or a police car to show up,” he said Friday.

Usual suspect target destinations like Quebec City and the towns surrounding Toronto always crop up in these situations, though the league is probably more likely to want to place brand-new teams there to maximize expansion fees. (Some estimate that in the right location they could net a healthy nine figures, all of which goes to the owners.) That leaves Seattle as the handsome stranger du jour. The recent news that Chris Hansen (the Seattle hedge funder, not the predator predator) is looking to buy the NBA’s Sacramento Kings and relocate the franchise to the Pacific Northwest has increased speculation that any new arena he builds will one day house a hockey team, too. But for Coyotes fans, that “one day” seems incredibly far away. Can you blame them? They’ve been living the same waking nightmare, over and over, for what is starting to feel like a lifetime.