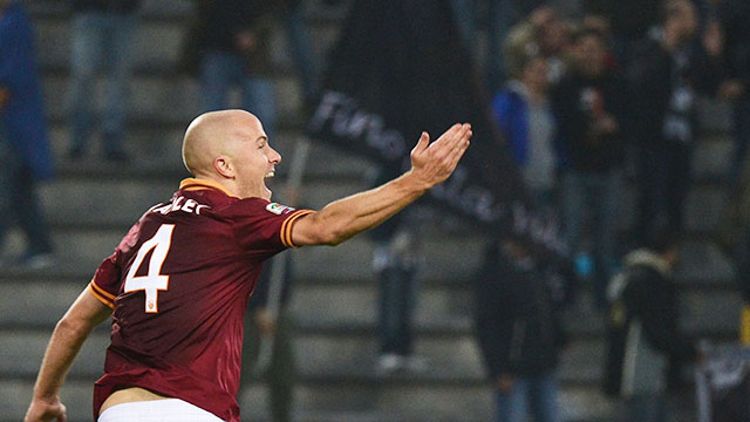 So, Michael Bradley is coming to Major League Soccer. And not just to Major League Soccer, but to Toronto FC, a club that is at best a chaotic mess and at worst terrible. Or maybe reverse those. Regardless, Bradley’s transfer from Roma, a team that sits in second place in Serie A, is shocking; it’s more shocking than even Clint Dempsey’s shocking transfer to the Seattle Sounders over the summer. Dempsey, while still in his prime, is on the downside of that prime. Bradley, the best and most important player on the United States national team, is 26 and clearly getting better. So, WTF?

You can’t talk about this transfer without talking about money. While that’s perhaps a cynical take, it’s also an honest one. Bradley makes $1.1 million after taxes at Roma, a good chunk of change but not a huge amount of cash for a professional athlete. (You know who makes about that much? Dikembe Mutombo, who will get $1.8 million from the Houston Rockets despite not playing a game since 2009. This isn’t really relevant, but I love it anyway.) Bradley will earn a reported $6.5 million a year in Toronto over the course of his five- or six-year contract, plus whatever percentage of the $10 million transfer fee he receives. That’s set-for-life money, done and dusted, the type of figure he wasn’t going to see in Europe for years, if ever. Is he overpaid? Yes. Does that matter? No.

Speaking of Europe, you also can’t talk about this transfer without talking about his situation at Roma. He wasn’t a fixture in the starting lineup, buried behind some combination of Daniele De Rossi, Kevin Strootman, and Miralem Pjanic. Add newly signed Radja Nainggolan to the mix and Bradley’s playing time would diminish even further. Bradley was looking for an out before Roma brought in Nainggolan on loan from Cagliari, which tells us all we need to know about how he felt about his playing time situation. Here’s the major factor in the transfer: It’s a World Cup year, and Bradley knows he needs to be on the grass, kicking a ball, and getting serious minutes. Not every third game. Not every other game. Every game and for the full time. He’ll get that chance at Toronto, where he’ll be asked to lead his club the way he leads his country. It’s a step down in quality from Roma, for sure, and there was interest from European clubs including Verona and Bologna, but returning to the U.S. league outweighed those offers.

And finally, you really can’t talk about this transfer without talking about what it means for MLS. Bradley becomes the second- or third-biggest transfer behind David Beckham and, depending on your perspective, Dempsey. (I’d argue Bradley is no. 2.) Toronto FC might announce Bradley and Jermain Defoe together on Monday, which my word. This is, to quote Joe Biden, a big fucking deal. “The way you make the league better is by having better players, and certainly in the last six months we have got two of our better players back in the league,” Landon Donovan said at U.S. training on Thursday afternoon. Put another way: Bradley, Dempsey, and Donovan all play in MLS. Add Matt Besler, Omar Gonzalez, Brad Evans, Graham Zusi, and Eddie Johnson, and you’re talking about a majority of U.S. starters who now play in the domestic league. This is only going to continue in the coming years. Everyone wants American players to play week-in, week-out in the world’s best leagues. The fastest way to do that is to make MLS one of the world’s best competitions. We’re a long way from that, but Bradley’s return is more than a huge step in the right direction for a league that boasts a higher quality than most people think.

But really, the only way to make sense of this transfer is to talk about Bradley as an individual. He’s not your normal athlete. That cerebral nature that serves him so well on the field? Yeah, that’s his career path as well. From a teenage prodigy to success in the Eredivisie, then the Bundesliga, then Serie A. Even how he has come out of his shell as a vocal voice on the national team, both in the locker room and in the media, feels planned. (Yes, it helps that his father is no longer the coach, but even so.) It’s not like Bradley woke up on January 1 and decided he wanted to transfer to MLS. A lot of careful consideration went into this move, thinking about his present, his future, his family, his life. Michael Bradley does not do things on a whim, not on the field, not in his career. And know this: Bradley is more competitive than you realize. This is not Bradley giving up; this is Bradley moving on.

Of course, the choices one can make are limited by the choices one has. I’d like to see him start for one of the best sides in the world. We all would. Personally, I think he’s good enough to succeed in the Champions League. Bradley is the type of player who makes everyone else on the field better. He’s so smart, so aware, always in the right place. As he’s matured, his technique has come to match his exemplary vision. His passing, short and long, is better, so much so that he led Roma in completion percentage. But no one came calling with an offer to match. You can’t play where you’re not wanted.

It’s possible that this move blows up, that he struggles in Brazil, and that we blame this transfer. But it’s also possible that he’s happy, more settled, better. There’s no way to know. What we do know: Bradley is not done. “I think it’s a testament to our league that people want to come back and play here, particularly six months before a World Cup,” Donovan said. Bradley may join the U.S. when it returns from a weeklong trip to Brazil that begins on Sunday. Whether or not he does, the midfielder is where he belongs: helping American soccer now and into the future.