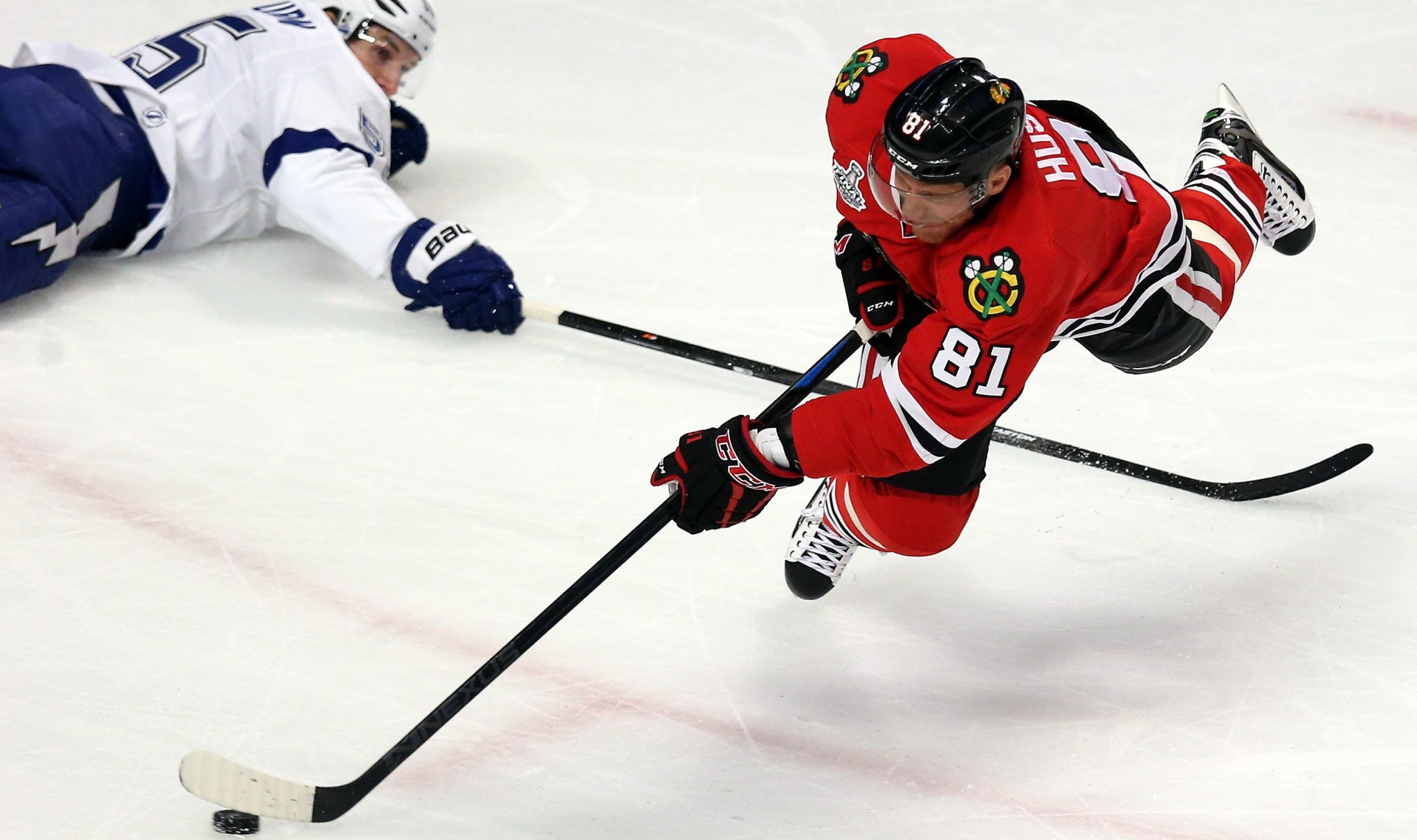 There’s a conversation about the Chicago Blackhawks that seems to repeat itself as their playoff run rolls on. It goes something like this: Somebody wonders out loud how many future Hall of Famers are on the roster. Someone else immediately rattles off the names of the team’s big three — Jonathan Toews, Patrick Kane, and Duncan Keith. And someone else points out that head coach Joel Quenneville will be an obvious choice.

Then there’s a pause, the question hangs in the air for a bit, and finally someone hesitantly adds “ … and maybe Marian Hossa?”

At 36, Hossa has spent this latest playoff run doing what Hossa does: a little bit of everything, often quietly, and usually from just outside the spotlight. Last night he had an assist on Toews’s opening goal, giving him four points in the series. With the Hawks now deploying him on a line with Toews and Patrick Sharp, he figures to be a key figure over the second half of the series.

He also makes for the subject of an interesting HOF debate. My experience has been that people say it’s a relatively easy call — they just can’t agree on the call. To some, he’s a slam dunk. To others, he’s a respected player who falls solidly into the “Hall of Very Good” but just doesn’t have the résumé to deserve more than that.

So as Hossa makes what by now has become his near-annual appearance in the Stanley Cup final, it’s fair to ask: Are we watching a future Hall of Famer? Let’s walk through the pros and cons.

Hossa crossed the 1,000-point mark early in the season, and with 486 goals he should get to 500 next year. Those tend to be the big milestones for HOF candidates, at least among forwards, so by crossing them Hossa guarantees himself a spot in the discussion.

But that’s about all it guarantees, because those milestones don’t carry the same weight that they once did. There are plenty of guys in the 500/1,000 club whose HOF candidacy never gained serious traction. That includes players like Pierre Turgeon (515/1,327), Pat Verbeek (522/1,063), Keith Tkachuk (538/1,065), and, for reasons that nobody has ever fully explained, Dave Andreychuk (640/1,338).1 Jeremy Roenick (513/1,216) hasn’t been inducted and looks like he may never be, and even Mark Recchi (577/1,533) didn’t get in on the first try, although virtually everyone agrees he will eventually. So Hossa’s number are good, but they’re well short of making him any kind of a sure thing.

Of course, unlike all those guys mentioned above, Hossa played his entire career in the dead puck era. But even on an era-adjusted basis, he’s still trailing Roenick and Turgeon, and he’s miles behind Andreychuk and Recchi.

On the other hand, all those numbers are for the regular season only — mix in his 143 career playoff points, second only to Jaromir Jagr among active players, and Hossa gets a boost.

This may be the strongest argument for the “good but not great” side of the debate. Hossa has never won a major award and was a finalist only once (for the Calder as Rookie of the Year in 1999; he came in second to Chris Drury). He has one postseason All-Star selection, making the second team in 2009. And that’s pretty much it. His best finish in Hart Trophy voting for MVP was 10th; his only other top-five finishes for any award came for the Lady Byng in 2003 and the Selke last year.2

He did appear in five All-Star Games, which isn’t bad in a league where that game is often wiped out by lockouts and Olympics. But the lack of any significant hardware, or even all that many near misses, paints a picture of a very good player who was never in the conversation as being among the league’s best.

Here’s where the case for Hossa gets a major boost. He’s currently making his fifth appearance in the final in the last eight seasons, a remarkable span that includes 137 playoff games spread across three teams. And if the Blackhawks can finish off the Lightning, he’ll have his third Stanley Cup ring.

We can argue over whether Cup rings should be a factor in HOF arguments — personally, I don’t think they tell us very much about a player — but there’s little doubt that they do come into play. The list of All-Star-caliber players with three championships who didn’t get into the hall can’t be very long, and Cup rings sure seemed to boost the case of marginal candidates like Glenn Anderson and Clark Gillies. The fact that Hossa came close on multiple other occasions can’t hurt either.

Simply quoting Hossa’s offensive numbers don’t really do his game justice. As his career has worn on, he’s evolved into one of the best two-way wingers in the game. He may not have been a Selke finalist yet (wingers almost never win that award), but any list of the game’s best defensive forwards has to include his name.

Beyond that, it’s just awfully hard to think of any holes in his all-around game. Stats guys tend to love Hossa, so the “watch the game” canard doesn’t really apply here, but you really do have to watch Hossa play to appreciate him. He’s always in the mix at both ends, and almost never gets caught out of position or makes a mistake.3 He’s also deceivingly strong, both with and without the puck — he doesn’t get the traditional “power forward” label since he rarely throws monster hits or drops the gloves, but he probably should.

The guy is just flat-out a joy to watch. And you can tell his teammates love playing with him — they get practically giddy talking about him. Sometimes, disturbingly so.

We’ve already run down some of the guys with similar numbers who haven’t made it into the Hall. But others in Hossa’s ballpark have — Anderson and Joe Mullen both stand out, and they even played in the freewheeling ’80s. But let’s look at something that tries to go a little deeper than basic point totals.

Hockey-Reference.com produces career Similarity Scores based on point shares. It’s not a perfect stat — hockey badly trails other sports in creating a one-stop stat to measure overall value — but it usually produces some reasonably good comparison, especially since it’s adjusted for era. In Hossa’s case, his similar-players list includes a few Hall of Famers, including Bryan Trottier and Jari Kurri. But it also reads like a who’s who of near misses, with names like Tkachuk, Theo Fleury, Paul Kariya, and Alexander Mogilny.4

But those guys were all primarily offensive players. Among two-way players in Hossa’s point range, you find guys like Sergei Fedorov (who isn’t eligible yet, but everyone seems to think will get in) and Rod Brind’Amour (who never seemed to come close). Perhaps the best comparable for Hossa5 is another Blackhawks two-way winger: Steve Larmer, who had put up similar offensive numbers until his career was cut short by injuries at 33. He’s been eligible for 15 years and has yet to be inducted, although his name comes up as a possible candidate just about every year.

Of course, that’s all based on Hossa’s numbers right now. Barring a surprise retirement this summer, those won’t be his final career totals. Which brings us too …

As with any Hall of Fame debate over an active player, there’s some uncertainty baked into the equation because we don’t know how many years Hossa will stick around. He still has six years left on the flagrantly front-loaded 12-year deal he signed with the Blackhawks in 2009, although his $7.9 million salary lasts only one more season, drops down to $4 million for 2016-17, and then plummets to $1 million for the final four years of the deal. If he retires early, the Blackhawks will be hit with a cap-recapture penalty and a big chunk of dead cap space, so there will be pressure for him to stick around. (In theory, his shady contract could also take some of the shine off his reputation, although it’s hard to imagine that being a major issue for HOF voters.)

He’s still playing at a high level at 36, so you’d expect him to have at least another solid year or two in his tank. Two good years would give his numbers a nice boost. On the other hand, if that contract causes him to stick around too long after his play drops off, that could hurt his case.

Hossa has plenty of international experience, including an impressive 24 points in 19 games spread across three Olympics, although as a member of the underdog Slovaks he’s never won a medal. He’s generally been friendly with the media,6 and has avoided any sort of black marks on or off the ice that would hurt his candidacy.

The hall does seem to have a bias toward players who are strongly associated with one franchise — call it the Federko Exception — and against guys who bounced around too many teams. Hossa has played for five, but if he finishes strong with the Hawks, that may be close enough.

Perhaps the biggest knock on Hossa’s candidacy will be the nagging feeling that he was always good, but never the best — even on his own team. In Ottawa, he was in Daniel Alfredsson’s shadow. In Atlanta, Ilya Kovalchuk’s.7 In Pittsburgh, there was Sidney Crosby and Evgeni Malkin, and in Detroit there was Pavel Datsyuk, Henrik Zetterberg, and Nicklas Lidstrom. Now, with the Blackhawks, it’s Toews, Kane, and Keith who get most of the attention. Can a player be a Hall of Famer when he was never even The Guy on his own team? Maybe, but it makes for a tough case.

Let’s assume Hossa sticks around and plays well for at least a few more years, which should get him into the range of 530 goals and 1,150 points. Those are decent numbers, but not overwhelming. Assuming he doesn’t get a sympathetic Selke push in the coming years, he’ll retire without any individual awards — but with two or three (or more) Cup rings.

On paper, I don’t love his case. But here’s the thing: I’ve asked a few people in the hockey world about Hossa, and whenever I do, their eyes light up. They gush about him. The level of respect for his game may be as high as any active player I can think of.

Assuming he doesn’t become eligible in a year with an unusually packed class, my prediction is that his candidacy will generate a ton of debate, with the usual rhetoric on both sides that makes these sorts of conversations so much fun. But ultimately, I’m betting that the selection committee will remember that it’s not the Offensive Hall of Fame, it’s the Hockey Hall of Fame, and hockey is played at both ends of the ice. I think he’ll get in on the first try, and nobody will really bat an eye.