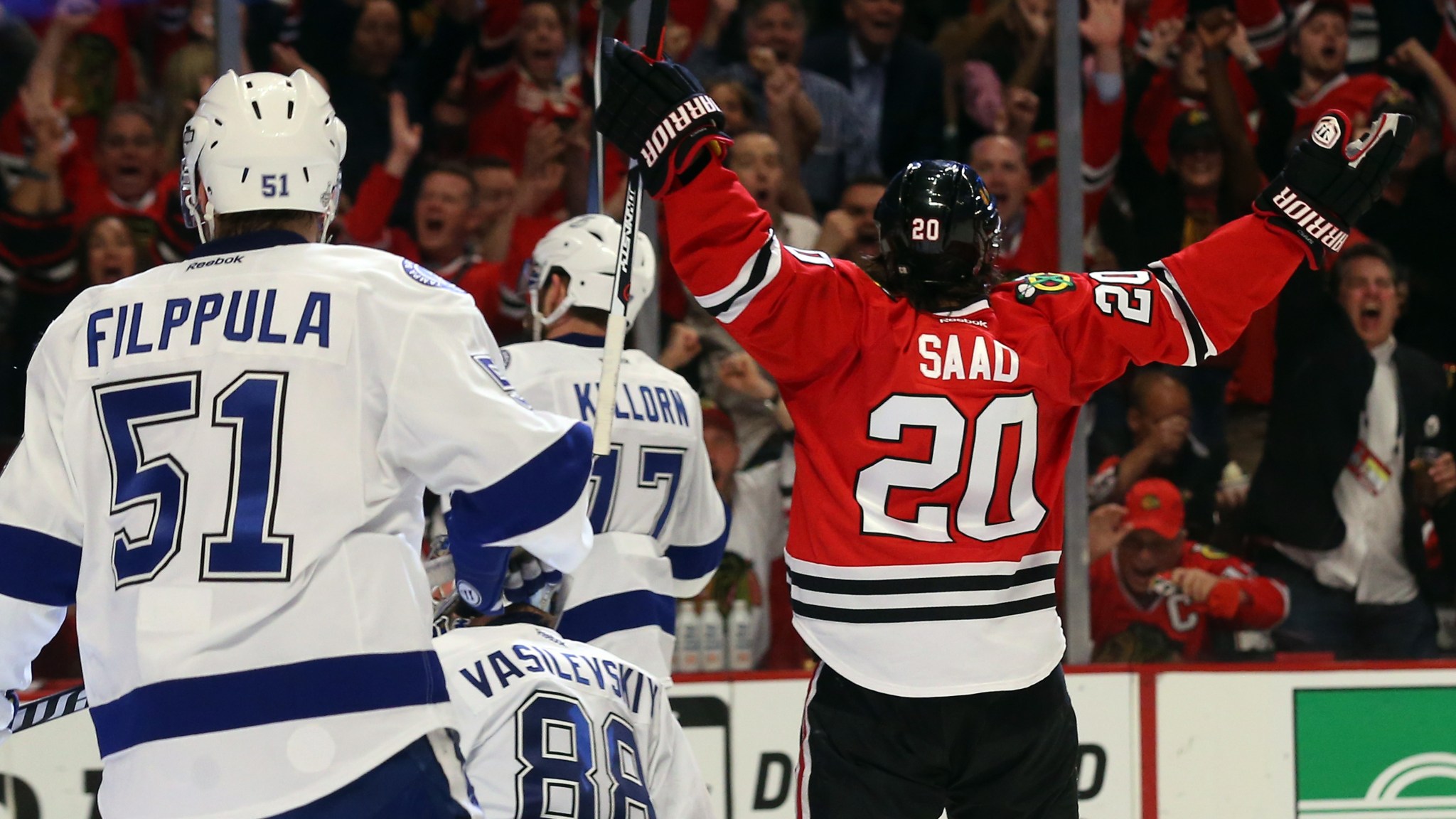 Really, the weakest part of Brandon Saad’s Game 4–winning power move on Wednesday night was the shot itself. With the game tied, as usual, in the third period in front of a nerve-racked and monochrome United Center crowd, Saad skated toward the boards after a faceoff, snagged control of the puck, and strong-armed past a pair of defenders at the crease like LeBron James driving the lane.

Then, for a second, the play died. Tampa Bay Lightning goaltender Andrei Vasilevskiy, a 20-year-old from the oil capital of Siberia who was tapped on game day to replace an ailing Ben Bishop, reached out and disrupted Saad’s progress, poking the puck free.

But Saad got a skate on it, kind of, then his stick on it, sort of. He whacked a semi-whiff of a backhand in the direction of the net, and the puck rolled through the emptiness between Vasilevskiy’s pads. The United Center erupted, all of those red jerseys going from latent magma to hot lava.

“What is he, 21 years old?” asked Blackhawks forward Patrick Sharp after the game. (Saad is 22, thankyouverymuch.) “He looks like a grown man out there. Takes the puck, tells everybody what he’s going to do with it, just bulls people over and gets to that net.”

Hockey’s funny — had Saad, who said he just “tried to drive and create some chaos,” gotten the perfect full-speed shot off, had he lifted the puck off the ice, Vasilevskiy may well have been positioned to make the save. Sometimes your best isn’t good enough, but other times your best isn’t what’s best for you. Just ask Steven Stamkos.

In a flurry of action in the game’s final minutes that undoubtedly felt like a lifetime to Chicago supporters, the trailing Lightning got off shot after shot, including two Grade-A chances square off the stick of Tampa Bay’s biggest star. One of them seemed so surefire that it caused defenseman Victor Hedman, who had as good of a vantage point as anyone in the arena, to raise his arms in celebration. (Save by Corey Crawford.) Another was heading toward a gaping expanse of open net until it suddenly wasn’t. (Block by Brent Seabrook.)

“I don’t know how one of those didn’t go in,” Tampa Bay coach Jon Cooper said afterward. “I’m sure there were 22,000 nervous people in the stands when we were zipping it around there.”

If the fans in Chicago were nervous — and they sure were — it was a function of a few things. For one, the Blackhawks have developed a worrisome tendency to lose their grasp on leads throughout this playoff run. Ten times in the postseason the Blackhawks got a goal and then, within two minutes, gave one up — the latest being Ondrej Palat’s Game 3 goal that came so soon after a Chicago score that the public address system was still announcing details. (An Uber driver in a Hawks jersey who attended Game 3 said he’d been in the middle of chugging a customary celebratory beer when Palat’s goal went in.)

And then there was the series of excruciating almosts in Game 4 that suggested this might not be the Blackhawks’ night: goalposts loudly denied Marcus Kruger and Sharp in the first period with the score tied 0-0; a crossbar did the same to Kimmo Timonen at 1-1 in the third.

If Saad was aiming to create chaos, Jonathan Toews sought to control it. A scramble in front of the net in the first period led to a rebound that found the captain’s stick, and he swept the puck in for a 1-0 lead. It was a relief in more ways than one: An emerging story line in this series, and one that players and coaches are growing visibly tired of discussing, has been the dearth of scoring from the Toews-Kane-Stamkos trio. Toews’s goal didn’t put an end to the discussion, but it was a start.

Midway through the first period, Alex Killorn converted a beautiful behind-the-net pass from Valtteri Filppula, sending the puck back from whence it came and catching Crawford sliding in the wrong direction. The play looked a bit like a rally winner in tennis: By the time Crawford reacted, the point was already past. It was a rare misstep in a hell of a game by the Hawks goalie, who did an otherwise fine job of anticipating Tampa Bay’s trademark east-west maneuvers.

In contrast to the Chicago takeover of Amalie Arena in Tampa — and Game 5, on Saturday night, ought to play host to another huge number of visitors, ticket policies be damned — there was scarcely a blue sweater in the United Center crowd for Games 3 and 4. Lightning goals resulted in a vacuum of sound, a collective gulp, a great swallowing void.

Had Tampa Bay converted on any of those shots in the final minute, it would have sounded as if millions of voices had cried out in terror and were suddenly silenced. But there was to be no great disturbance in the Force. In the basement of the arena after the game, United Center staffers pushing carts of concessions inventory were in happy spirits, talking about Chicago’s two recent Cups — how both had been won on the road, and how maybe this year they’d see the trophy at home.

Hockey’s funny: Winner Brad Richards evaluated the night as “probably our worst game in a while, for whatever reason.” Loser Anton Stralman said “we’re playing some good hockey — sometimes you play well and you don’t get the results you want, but that’s OK. That’s hockey.” After four games, the two teams are eerily matched: 107-104 in shots, 9-9 in goals, and 2-2 in wins.

On Tuesday, NBC Sports chairman Mark Lazarus remarked that he wished NHL players would lose those defacing playoff beards, and that he had even tried to get the league to ban them. “Let’s get their faces out there,” he said. “Let’s talk about how young and attractive they are … These are the most-watched games and they’re all bearded up.” Players chuckled at this. “I don’t think that’s gonna fly with us,” Tampa Bay’s Andrej Sustr said.

Far from rendering them unrecognizable, the facial hair on Wednesday night’s victors gave them a look all their own. Saad and Toews sat on the dais in the press-conference room answering questions, a Game of Thrones swordsman with center-parted hair and sleek, manicured beard alongside an Amish farmer with intense, beady eyes and patchy chinstrap. They smirked at each other’s answers, as the Blackhawks so often do; so many inside jokes were left unsaid.

Saad said he’d looked up to the Pittsburgh Penguins while growing up in Pennsylvania, that Mario and Jagr were his first role models, and that he’d loved watching Crosby and Malkin as a promising teen. Toews smiled at this, and you wondered what he was thinking, but in a way you could guess.

Those Penguins won a Cup in 2009 and were the toast of the league, the sport’s future, a surefire dynasty just getting its start. Then the Blackhawks won a year later, and then again three years after that, and they are now oh-so-close to a third Cup in six years. They’ve done so despite losing key players and bringing new guys into the fold, despite off-ice distractions and on-ice disarray. (Coach Joel Quenneville’s notorious linemate switcharoos still endure; the Blackhawks debuted some surprise new looks for Game 4 at the same time the Lightning orchestrated some goalie gamesmanship of their own.)

Still, hockey’s funny: For all of Chicago’s success, the Lightning have been right there with them. Either team could conceivably have won all four games. Toews said the last few minutes last night seemed to go on forever. “I guess when you’re protecting a lead, especially against a team like this,” he said, “they’re always a lot longer than you’d think.”

Neither team has the lead at the moment, and neither team should. It’s been a rollicking, tense, fast Cup final, one filled with youngsters and breakouts and marketable stars, beards notwithstanding. We’re guaranteed a game apiece in Tampa and Chicago — and it’s safe to venture a guess it will last beyond that, even longer than anyone thinks.

Us vs. Them: The Story of Kevin Owens’s Stunning Rise to WWE Stardom