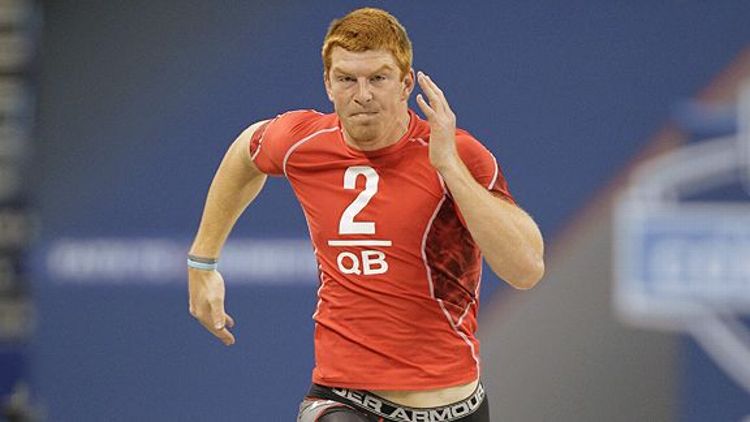 There is too much attention and praise showered on the modern elite quarterback. The Tom Bradys, Peyton Mannings and Aaron Rodgers of the league are celebrated as genius demigods, just because they can make split-second decisions and deliver precise passes while being chased by gigantic men who spent an entire week figuring out ways to injure them. Blah fucking blah. The more compelling narrative is that of the modern failure. Because when things go wrong for an NFL quarterback, they go spectacularly wrong. And there will be no shortage of that this season. On-field arguments. Botched handoffs. Locker room backstabbing. Seeing that unfold is way more fun than watching Brady sling the ball around for a bit, droneishly drop clichés at the press conference, then go home to the hottest woman on the planet.

This year, we’re going to make it even more interesting, using an old trick: adding a draft, a scoring system, and gambling.

Start writing an e-mail to seven of your friends now, because you don’t have much time to get going on your own Bad Quarterback League. The steps are simple:

1. Find eight people dumb enough to participate in a Bad Quarterback League.
2. Set the stakes.
3. Draft four NFL teams using a snake-style draft.
4. Each week, choose two teams to start (you can start a team no more than 13 times a season and no less than five times a season). Just so we’re clear — you’re drafting a team, and you get every quarterback on that team.
5. Check Grantland each week to get the scoring from the weekly scorecard.
6. Remember that every QB on your roster is eligible for 24/7 points. That means even if you didn’t start the Seahawks on Sunday, you still get the 150 points when Tarvaris Jackson’s penis appears on a blog on Tuesday.

The excitement and levity of our draft was refreshing. It was simple, quick, and people said things like “Are Jamarcus Russell and his purple drank still in the NFL?” No waiting around for hours, no third-string running backs, no “auto draft.” Just seven dudes and a girl trying to find the right combination of men who will fail miserably at their jobs. To check out the results, let’s go to the message board:

I had the first pick and went with Cincy for four reasons: (1) You can never go wrong with a redheaded rookie QB in a Bad QB League; (2) I want to have a stake in any situation in which Andy Dalton is being mentored by Bruce Gradkowski; (3) they play Baltimore and Pittsburgh four times; and (4) in a negative fantasy draft, you can’t go wrong with the Clippers, Bengals, or Royals really ever. Team Dalton & Gradkowski up with Jeff George 2.0 in Chicago and Whoever Replaces Matthew Stafford After Matthew Stafford Gets Hurt, the ground is really the limit. When your biggest fear in a Bad QB Fantasy League is “What if Carson Palmer comes back?,” life is good. See you in the playoffs.

I blew the first pick. Rex Grossman, Alex Smith, and Jason Campbell all sitting right there ready to throw interceptions, lose fumbles, and get arrested all for my benefit and I picked the Kevin Kolb-helmed Arizona Cardinals. My thinking there was if Kevin goes down at some point, John Skelton will be a starting quarterback in the NFL. I have no idea who John Skelton is, and that makes me very excited about him in this league. Aside from that pick I feel good about my other teams, the Bills play the Patriots and Jets four times a year and I know the Rams are a sexy pick to have a good season but until they change the helmets or resign Eric Dickerson I just can’t see that happening. Some might think that Philip Rivers would hurt me in this league, but they are forgetting how many “on-field argument with teammate,” “locker room fight,” and “apology press conference” points he will put up. If Philip Rivers hasn’t tried to stab Patrick Crayton by Week 4, I am in trouble.

Before the news broke of David Garrard’s release, I was going to call my team “Minority Report featuring Matt Ryan,” because, you know, Mark Sanchez, Cam Newton, and Garrard are minorities. But screw diversity! I now own the four-headed monster of Cam Newton/Jimmy Clausen and Luke McCown/Blaine Gabbert. Clausen, Newton, and Gabbert have a combined one year of NFL experience. If it weren’t for his brother and the fact that his name kind of sounds like Cade McNown, would anyone know who Luke McCown was? This is pretty much like drafting Frank Gore only to find out later that he has been cut and replaced with Adrian Peterson. GOOO MINORITY REPORT!

Listen, I’ll just say what we’re all thinking. This draft wasn’t great for me. That thing happened that sometimes happens in a fantasy football snake draft, where you have a player/team in your sights that you think no one will take, and then that player/team slips past a few other people, and you’re excited (like, really excited) that the player/team is going to fall to you, and then the person right before you takes them and leaves you in a lurch where you don’t know who to pick and all of your plans and dreams are crushed. It sucks.

That being said, I think my team right now is all about the breaks. The Rex Grossman/John Beck combo has to equal less than half of a real quarterback. Donovan McNabb has to play like he has over the last two years and not miraculously become not mediocre-to-bad. Eli has to prove to us all that he’s as confused and squinty-eyed as he appears to be on the sidelines and in life.

Why did I pick the Saints? Because one time, when we were in a meeting or playing Madden or something, Bill Barnwell said that Drew Brees actually had a sneaky bad second half of the season last year, and you know what, that’s good enough for me.

First of all, it is killing me that Cho has the Skins. If there’s ever a team I wanted to root against, it’s that one. They are (sorta) my team’s namesake! And as for my picks … man, I don’t know. I feel pretty good about Baltimore (Hey there, Ravens! This should be fun) and I’m fairly confident that Brady Quinn will get arrested this year. But I was immediately filled with searing regret after using my first pick on the Seahawks, leaving worthless Cam Newton and the Carolina Panthers available for Kang. I felt a little better after I chatted about quarterbacks with my buddy Adam, who runs our (non-Grantland) fantasy football league, lives in Seattle, and has actually been attending MLS games for fun. “Seattle is a train wreck,” Adam wrote. Reassuring! He later called Pete Carroll a “dirtbag fake.” Good points, dude. I agree. Maybe this wasn’t such a missed opportunity after all.

I don’t have faith in much, but this I know for certain: Tarvaris Jackson is a miserable failure. A proven miserable failure. He’s got the stats to back it up! Come on, Tarvaris. Suck it up again this season. I know you have it in you.

Dan Fierman here. This was supposed to be my team. I had ranked my quarterbacks. Studied the injury histories of every starter. Threatened to withhold gambling money from Bill Barnwell unless he helped me with my draft. Then work intervened and instead of waiting — LIKE CIVILIZED HUMANS DO — my coworkers handed my team to Carles to draft. Worse, he did better than I ever could, pulling the Colts in the second round. I hate everything and everybody.

LATE ADD: Carles sent in his message board post. It is below.

Matt Schaub is the current quarterback for the Houston Texans, and I think he is probably doomed to have some horrific games. I am hoping that Schaub is so bad that he gets benched, then Matt Leinart finally gets to prove that he has always just been an overhyped college quarterback. It would also help if Matt Leinart got into a celeb relationship that led to some noteworthy off-the-field incidents. The 49ers are installing a ‘new regime’, so they will hopefully tank the season in order to try to get a quarterback that terminates the failed Alex Smith experiment. As Keith Van Horn taught us, a bro who went to Utah just can’t be your team’s alphadog, but he can be good at wearing long socks.

Philadelphia is being branded as ‘the Miami Heat of the NFL’, and what’s more fun than rooting against the Miami Heat? The Eagles have a weak defensive line, and Michael Vick could end up missing significant time if he gets consistently pummeled. That would mean more Vince Young, who is known as the only quarterback to be on suicide watch. Speaking of dark demons that shouldn’t be joked about, Kerry Collins is Peyton Manning’s backup. I am hoping that Peyton’s injury is serious enough to miss games. I am counting on the Colts and Eagles massively underachieving due to significant injuries to their most important players.

If Michael Vick has the season that every one expects him to, my team is doomed.

Balance. That was the goal for the HouseBoys in the BQBL. Non-injury in-game benching? Why, thank you, Chad Henne. Low-yardage, low-TD, multi-INT potential? Yes, young Colt McCoy, you make a perfect HouseBoy. Questionable backup situation? Matt Cassel’s ribs are on the phone, Tyler Palko, they suggest that you wear your good pants on Sunday, just for the HouseBoys. (Bonus Palko note, here’s a portion of his scouting report: “He’s a very average thrower of the football, but he has obviously worked on it quite a bit and he looks to be improving.” In other words, HOUSEBOY.) As for Dallas/Romo, it seems like a penis pic is probably off the table now that Romo is married. But it won’t hurt for Colt McCoy to have Dallas backup Jon Kitna around, just in case Colt feels like he could use some help figuring out why God lets him throw so many interceptions.

Having the eighth pick sucked. Instead of two rookies, Rex Grossman, or Alex Smith, I’m left with a guy who has, at some point, succeeded in throwing to guys on his team. What I’m banking on here is that Matt Hasselbeck is 52 years old, and I get at least three games of Jake Locker. Ya know, the guy who had trouble completing half his passes against the likes of Washington State.

Really, I don’t know how much any of that matters. My fate in this league will fall on Ben Roethlisberger. Big Ben is the ultimate bizarro prospect in this draft, the exact opposite of the potential All-Pro who falls three rounds due to character concerns. He’s a third-round pick because of that 350-yard, 4-TD day he’s going to have against Seattle, but no one will be surprised when he puts together a week with a police run-in and an apology press conference that ends with a six-game suspension from Sheriff Goodell.