Adrian Peterson and the Lead Draw: The Vikings’ Throwback Play for Their Throwback Runner 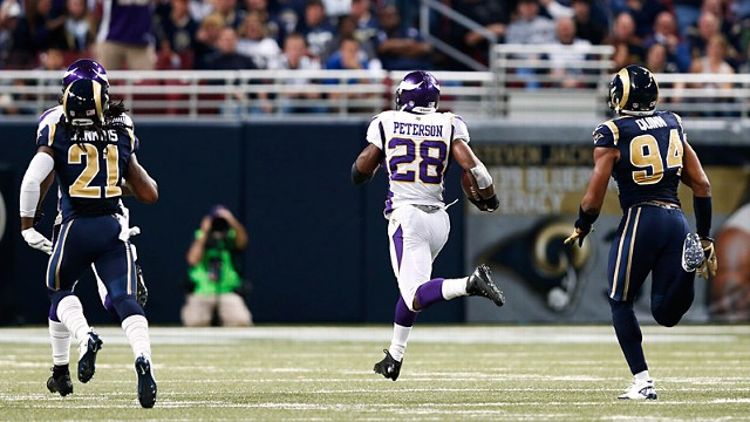 In recent years, running back, once football’s glamour position, has been diminished beyond all recognition. Not so long ago, NFL teams routinely built around franchise running backs, but now the need to highly invest in the position is mostly gone. Late-round picks in established systems frequently explode onto the scene, only to be replaced by some other value pick in time. The franchise running back is dead.

Except, of course, for Adrian Peterson, who is the exception that proves the rule. Nearly every bit of modern football wisdom we’ve learned about running backs — running backs should be short and compact, running backs don’t return from major knee surgery as the same players — must be qualified with “… unless you’re talking about Adrian Peterson.” From his talent, to his results, to his importance to his offense and his team’s success, Peterson is a throwback to an earlier time, a time when running backs still reigned supreme.

Even the plays Peterson uses are throwbacks. Unlike most NFL teams, the Vikings primarily use straight-ahead blast or “isolation” blocking schemes, which have largely been supplanted in most NFL playbooks by zone blocking or so-called “power” plays. Peterson’s most productive play is maybe the biggest throwback of all: the lead draw.

The lead draw has a storied history. Dating at least as far back as the Johnny Unitas–led Baltimore Colts, the play had maybe its greatest rennaissance when run by Emmitt Smith for the Dallas Cowboys. To this day, Smith — not commonly known for his rhetorical flourishes — waxes philosophical whenever asked about the play, as he details the subtle ways he played off the blocks of his massive offensive line and fullback Daryl Johnston to wear down, and then break, defenses. The play epitomized the running game of the great 1990s Cowboys teams. Defenses knew it was coming and still couldn’t stop it.

The lead draw works very much the way its name implies: At the snap, the offensive line and quarterback step away from the line just as they would on a pass play, in an effort to make the defense think they are trying to throw the ball — a “draw.” Meanwhile, “lead” refers to the block of the fullback or H-back, who initially looks like a pass blocker before leading the way for the runner. In short, the lead draw combines deception with power, which is also an apt description for Peterson’s running style. One of the best examples of Peterson running the lead draw came in the second quarter against St. Louis last fall.

On first-and-10 at their own 18, the Vikings lined up in an “I-formation” set with quarterback Christian Ponder under center, fullback Jerome Felton lined up in front of Peterson, and a tight end, Kyle Rudolph, who motioned from left to right just before the snap. The Rams defense didn’t hide their plan: They had eight players up close to the line, specifically to stop Peterson.

But this plan began to unravel almost immediately. As the Vikings showed “draw” — with Ponder stepping away from the line, eyes downfield, and the offensive line feigning pass blocking — some Rams moved out of position as they searched for a path to Ponder, while the linebackers stayed back on their heels. As is clear from the above image, there is already a running lane for Peterson, and he has barely moved out of his stance.

By the time Peterson has taken the handoff, all the blocks are set up perfectly: The line has created a lane to his right, and Rudolph and Felton are in great position to eliminate the Rams linebackers. The Vikings even got a bonus from the Rams, as St. Louis defensive lineman Kendall Langford has bailed to run to his assigned zone in a zone blitz. All that was left was for Peterson to do what he does best: Run — no, explode — to the end zone.

It’s at this point that Peterson transforms a 6-yard gain into an electric 82-yard touchdown, first by setting up his blockers, then with an incredible jump-cut to his left, and finally with raw acceleration that leaves defenders with typically perfect angles helpless. While the blocking and design of the play need careful analysis to be appreciated, Peterson can only really be appreciated in full speed, eyes wide, mouth agape.

Peterson’s 2,000-yard 2012 season becomes all the more incredible when you consider how weak his supporting cast was, particularly in the passing game. Minnesota finished 31st in passing yards and 30th in net yards per passing attempt, a pathetic figure in light of the focus defenses put on stopping Peterson. Ponder simply must become a better quarterback if the Vikings hope to make a serious push this season.

Given the incredible weapon at its disposal, the throwback play that might even be better for Minnesota than the lead draw is what it could lead to in the passing game: the lead draw play-action pass. “The draw pass is probably the most effective single play-pass,” legendary 49ers coach Bill Walsh once explained. “Your line-men are allowed to pass protect as they would on a drop back pass and you can still fake the draw to the back.” During their Super Bowl years, Troy Aikman decimated defenses obsessed with stopping Emmitt Smith with the lead-draw pass, which in turn opened room back up for Smith to roam. This fall, I’m hoping Ponder improves, if for no other reason than I will never, ever get tired of watching Peterson run the lead draw. All Day.