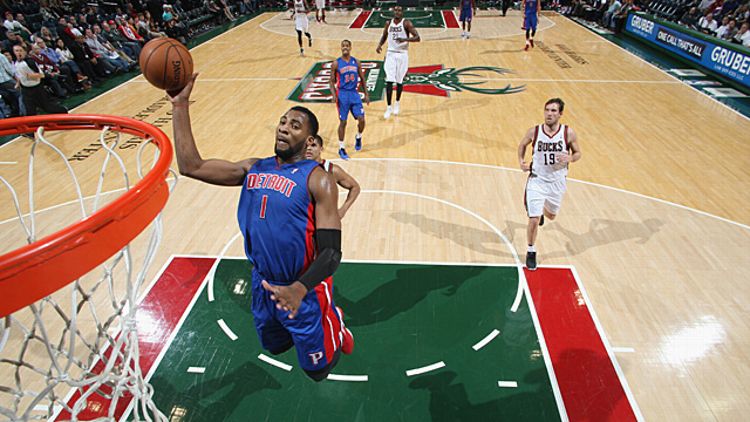 We thought the NBA offseason was over, we thought it was time to move on to football, we thought Brandon Jennings was going spend the rest of his prime in NBA limbo like Mahmoud Abdul-Rauf.

Detroit and Milwaukee are nearing a sign-and-trade agreement to send Brandon Jennings to the Pistons, league sources tell Y! Sports.

And now we just need to take a few minutes to talk Pistons, because this team deserves to be celebrated. We might as well start with Jennings.

Brandon Jennings is not perfect. His problem is twofold. He’s a streaky shooter and someone you can’t totally depend on to show up and play well every night. If that were the only problem, that’d be fine. The second problem compounds it, though. Not only is Jennings streaky, but even when he’s playing well he tends to monopolize the ball, and his success comes at the expense of everyone else, keeping them from getting into a rhythm, etc. That’s why Jennings was unsigned until July 30, and why he’s considered a level below some of the other point guards from his draft class (Ty Lawson, Steph Curry, Jrue Holiday). All of it makes sense.

On the other hand … Jennings isn’t as hopeless as everyone says. He’s got enough talent to hang with the best point guards in the league and not get blown off the court. If you’re paying him $12 million a year to be one of your two or three best players, then yeah, he’s overrated and flawed and he’ll drive you insane. But $8 million a year to fill a gaping hole at point guard? Then he’s more of a luxury. And Jennings will be surrounded by more talent than he’s ever seen in Milwaukee, with the added bonus of Chauncey Billups there to help him grow.

So much of the NBA comes down to luck. If you’re not Kevin Durant or LeBron James, finding the right situation to thrive in is half the battle. For example, Ty Lawson is great, but he also landed in Denver, where he could (a) learn behind Chauncey Billups for his first year, and (b) push the ball constantly and play to his strengths. I’m not saying Lawson’s overrated, but if you put him in Milwaukee for the past four seasons, he might have looked just as flawed as Brandon Jennings. Now, after a summer when Jennings kinda turned into a league-wide punch line, he lands in Detroit with a chip on his shoulder and a fresh start. This could work better than you think. It was a smart deal.

Three freak-athlete big men (Andre Drummond, Josh Smith, Greg Monroe) who can’t shoot, a point guard who shoots too much (and still can’t shoot), a bench full of wild cards, Will Bynum and Rodney Stuckey … How is this really a team?

Everything about this Pistons squad and the way Joe Dumars built it has been a giant middle finger to everyone. Nobody would take a chance on Andre Drummond in the 2012 draft? The Pistons grabbed him. Nobody wanted to commit big money to Josh Smith? The Pistons swooped in and stole him for $54 million. Chauncey Billups is washed up? Chauncey Billups is coming back to Detroit. Tony Mitchell? Freak athlete/tweener who plummeted in the draft. BOOM. Pistons. Kentavious Caldwell-Pope? Well … nobody has any clue what he’ll end up doing. But, hey, Pistons.

Throw in Jennings, and COACH SHEED, and the Pistons are basically just stockpiling guys who have driven the whole world crazy. Now they’ll drive the world crazy together. It’s League Pass Christmas!

There are three big reasons to love what’s happening here.

1. We live in tanktacular times. Practically every bad team in the NBA decided to tread water this summer or actively get worse. The Pelicans, Cavs, Wizards, and Blazers are exceptions, and maybe the Bobcats if you want to pretend the Bobcats are going to be better with Al Jefferson. But the Sixers, Jazz, Magic, Kings, Suns, Celtics, Mavs, Raptors, Bucks … There are a lot of bad teams who are either kicking the can down the road till next summer or building a tanking Dream Team for this year, gunning for the deepest draft class in history.

That’s all fine, it’s just that over the past few years it feels like that model has become the de facto blueprint for mediocre teams looking to contend. Like, if your favorite team is in no-man’s-land, you spend the year rooting for them to gut their roster over the summer and then hopefully get lucky in the lottery the following year. And even then, it has to happen in the right year. That’s how NBA fans dream in 2013. (Tanktacular times …)

It’s all pretty depressing. The Pistons are your reminder that it doesn’t have to be that way, and really, it has never actually been that way. Think of the franchises over the past handful of years that have landed top-three picks and built championship contenders. The Thunder, the Clippers, and … the Cavs? The Wizards? Raptors? Kings? The “tear it down” model fails more often than it succeeds, and it takes years to work.

The Pistons began this summer in a dead zone, with all kinds of motivation to tread water and/or get rid of Greg Monroe, then land in the top eight picks next year (Charlotte has their 2014 pick, but it’s top-eight protected).

Instead, they decided to gamble on guys like Smith and Jennings and put together an insanely athletic — and just insane — roster full of undervalued guys, and then see what comes next. As Tom Ziller pointed out a few weeks ago, this is how the Grizzlies happened. But even if the Pistons don’t turn into Grit ’N’ Grind: Motor City Remix, it’s still pretty cool to see them break from the tanking ranks to go for it. Also:

2. All of these deals were smart. If things don’t work, Jennings and Smith have decent contracts that could be moved anytime in the next few years, and Greg Monroe will be one of the three or four best trade chips in the NBA next year. If it were Daryl Morey making these moves, people would be praising him for “stockpiling assets,” but it’s Joe Dumars, so the refrain is more “LOL Pistons.” Whatever. With the players they have, the Pistons management could make a play for Rajon Rondo, Kevin Love, or just clear space and go nuts in free agency again in 2014 or ’15.

As it stands, I feel like the Pistons probably have to find a way to sign Stephen Jackson. I know there’s no more cap space, but still. Make it happen. Just for the hell of it.

3. IT COULD WORK. I mean, sure, there are going to be some nights when the Pistons look like a complete disaster. Maybe that will be the whole year, until they deal Monroe and/or Jennings. It also hinges almost entirely on Drummond, who’s still a complete wild card. He looked great in small doses last year so a lot of people expect much bigger things next year, but who knows?

Either way, we should celebrate the Pistons because regardless of whether it works or not, it’ll be spectacular. I don’t know if I believe in the Pistons’ blueprint, but I’m glad it exists. It’s better than having another team like the Sixers and Suns, both of whom will be unwatchable all year. Plus: Is some guy like Marcus Smart really worth throwing away another season and giving up on someone like Greg Monroe?

Instead, as we said a few weeks ago, Detroit’s front line might dunk you to death. And maybe we’ll watch Andre Drummond turn into a monster for real, Greg Monroe will play on the first good team of his career, and Brandon Jennings and Josh Smith will prove everyone wrong. There will be lots of spacing issues in the half-court, the lineup is still ridiculous to think about, Maurice Cheeks and COACH SHEED will have lots of work to do to make it all fit, etc. But whatever happens will be entertaining.

And while everyone gawks at Detroit insanity, remember that the team that can’t shoot is also the team that should be able to outrebound everybody, and the Pistons will be a nightmare on defense and in the open court. I swear, it’s so crazy it just might work. (Right?)

Adrian Peterson and the Lead Draw: The Vikings' Throwback Play for Their Throwback Runner