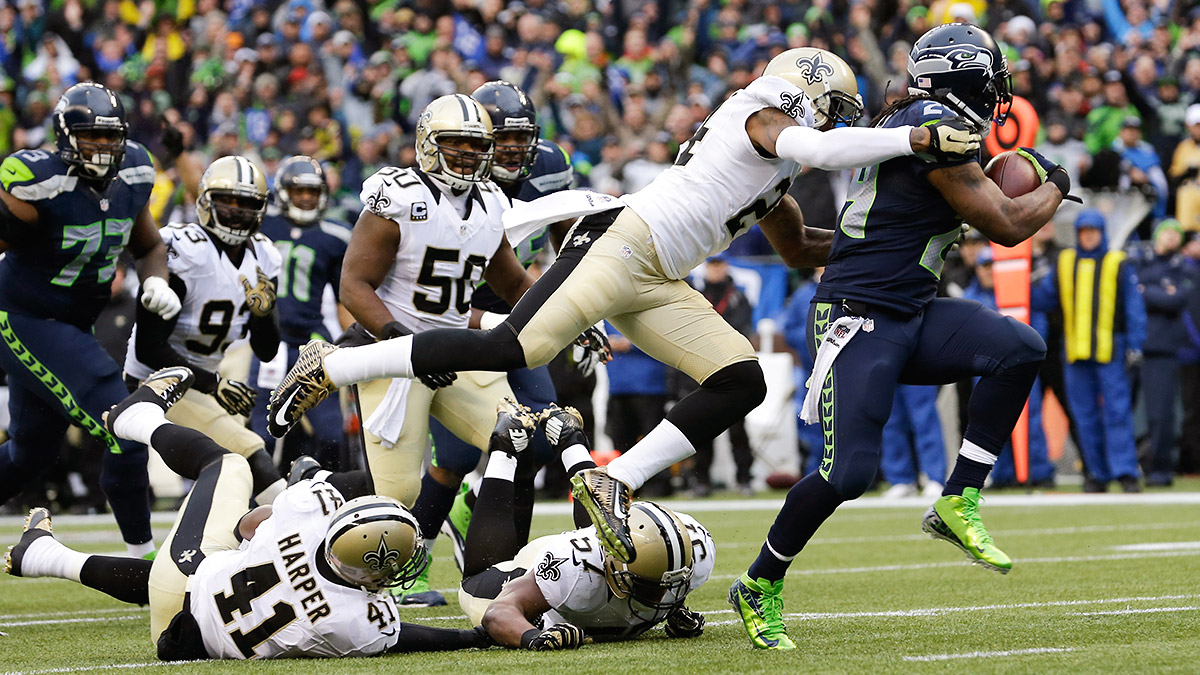 Welcome to Football 101, a series intended to help you, the fan, better understand some common NFL and college tactics so when you see a long run or a pick-six, you’ll have a better grasp of how and why it happened.

While many think the term “power football” describes an attitude or perhaps even a formation, coaches actually use it to refer to something more technical: the Power-O and Counter Trey1 run plays, which most coaches simply call Power and Counter, and which are foundational running plays in the NFL and college football.

Power and Counter are so effective because their very designs are forged from aggression. They’re deliberate melees built on double-team blocks, kick-out blocks, lead blocks, and down blocks, and preferably finished off by a running back who drops his shoulder and levels a defender or two before going down. And as this GIF shows, they can be things of beauty:

While football increasingly seems to revolve around quarterbacks who post gaudy passing stats in spread attacks, the inside running game remains the sport’s core no matter what offense a team runs. Let’s take a closer look at how Power and Counter were developed, why they work, and how teams are putting some new spins on some old plays.

“There is nothing magical about the Power play,” Paul Alexander, the Cincinnati Bengals’ longtime offensive line coach, said at a coaching clinic in 2012. Almost every NFL team runs Power, though some (like the Seahawks, Vikings, Steelers, and Bills) will emphasize it more than others, and it has produced some of the most dramatic plays in recent memory, including Marshawn Lynch’s infamous Beast Mode run. The idea behind Power is as old as football itself, as having an overwhelming force at the point of attack was an obvious strategy as soon as someone first picked up a football; versions of the play pop up as far back as in Michigan coach Fielding Yost’s playbook from 1905. But NFL coaches have spent the past 20 years tweaking and adjusting the play, and now the proper form is gospel. For example, below is a diagram of Power from one of Jon Gruden’s old playbooks. 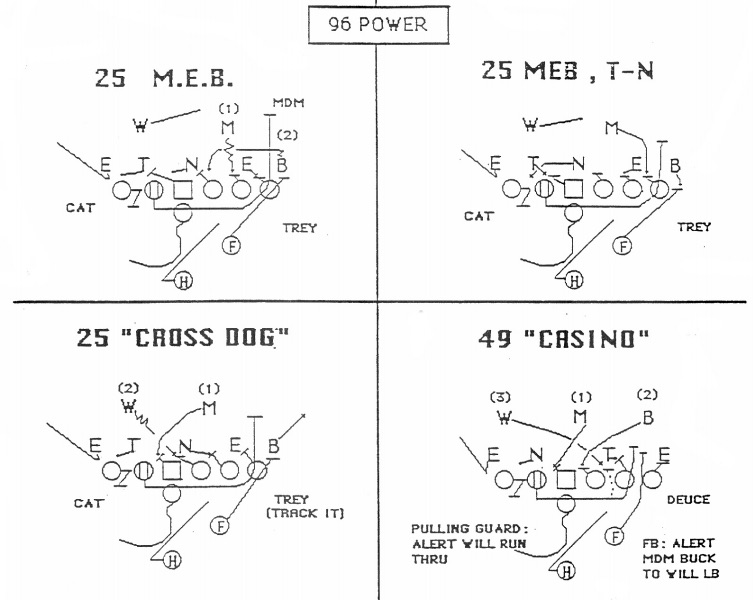 The basic responsibilities for Power are as follows:

• Playside linemen (tight end, tackle, and guard): The basic rule for each of the playside linemen is “Gap, On, Linebacker,” which means they first check their inside gap (i.e., if the run is to the right they look to see if anyone is lined up to their left), then look to see if anyone is lined up across from them, and finally, if there’s no defender to their inside gap or across from them, they will block an awayside linebacker. The hope is that those straightforward rules help to produce at least one double-team block to the playside, typically with the guard and tackle double-teaming the defensive tackle. The basic idea for the double-team is for the two linemen to move the defender out of the way until one slips off to block the linebacker at the last second — only when the lineman can “smell the linebacker’s breath,” as a college coach once said — as there is no hope for success unless the double-team is effective.2

• Center: The center steps backside to stop any inside penetration.

• Backside guard: Known as the “wrapper” because his job is to wrap around to lead block for the runner, the backside guard is tasked with pulling and blocking the first unblocked defender who appears.3

• Fullback (or another blocking back, like an H-back): He’s known as the “trapper” because his job is to execute a trap or kick-out block to create the alley. “The fullback is going to block the first thing off the tight end’s edge, inside to out,” Stanford head coach David Shaw explained at a coaching clinic in 2013. “We talk about having to pry the gap open. The fullback is the crowbar to the play.”

The specifics of Power are simple, though mastering them requires painstaking attention to detail. But when executed correctly, Power isn’t just effective: It embodies its moniker.

While Power’s origin is a bit foggy, history credits two men with inventing Counter: former Nebraska Cornhuskers head coach Tom Osborne and his offensive line coach, Milt Tenopir. In the 1970s, Osborne’s Nebraska teams — already known for their great ground attacks — used a devastating Counter Sweep play in which a wingback took the ball and ran around the end, but by the close of the decade, defenses had adjusted and were often stuffing the play. Osborne and Tenopir began looking for other ways to use a similar concept that combined misdirection with multiple pulling blockers. After some tinkering, the Cornhuskers designed the version of Counter now run by nearly every NFL and college team today. They debuted it in 1982 to instant success, as over the next two years feature tailback Mike Rozier ran for 3,837 yards on more than 7.4 yards per carry, scored 44 touchdowns, and won the 1983 Heisman Trophy. The Counter became a mainstay of Nebraska’s offense, fueling Osborne’s teams through the Huskers’ championship seasons in the mid-1990s.

But while Osborne and Tenopir reimagined Counter, a third coach made it truly famous: former Washington Redskins head coach Joe Gibbs. “We stole it,” Gibbs told Sports Illustrated. “We saw some film on Nebraska, and Tom Osborne was doing some really innovative things with his line up front. We were watching it and thought, God, that’s good stuff. So we stole it.”

Gibbs is shortchanging himself by saying all he did was swipe the play, though, as his insight brought Power and Counter to where we are now: Gibbs realized that Power and Counter were essentially the same play, with the only difference for the blockers being that on Power the fullback was the trapper and the backside guard the wrapper, while on Counter it was reversed.4 It was the application of this insight that led Gibbs’s Washington teams to three Super Bowl wins and earned his offensive line the “Hogs” moniker. Below is a diagram of Counter from one of Gibbs’s Washington playbooks: 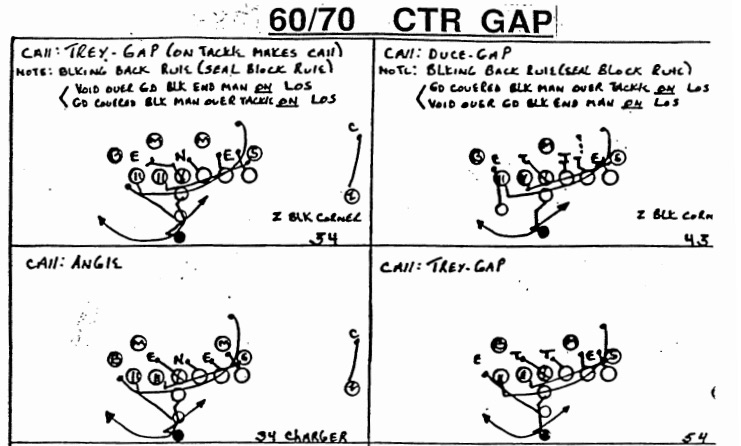 As the diagram shows, Gibbs initially ran Counter the way Nebraska had, with both the backside guard and tackle pulling to lead the way. But eventually Gibbs began using a backside tight end or fullback as the wrapper instead of the tackle, an adaptation that has now become standard. This tweak accomplished two things: First, it reinforced the overlap between the two plays, as the tackle’s assignment was now the same as on Power. Second, it eliminated the large gap that opens when both the backside guard and tackle pull, which excellent defensive linemen — think J.J. Watt — can exploit by bursting through the line to blow up the play in the backfield. The diagram below from Gruden’s playbook shows how other NFL coaches came to adopt Gibbs’s tweaks: 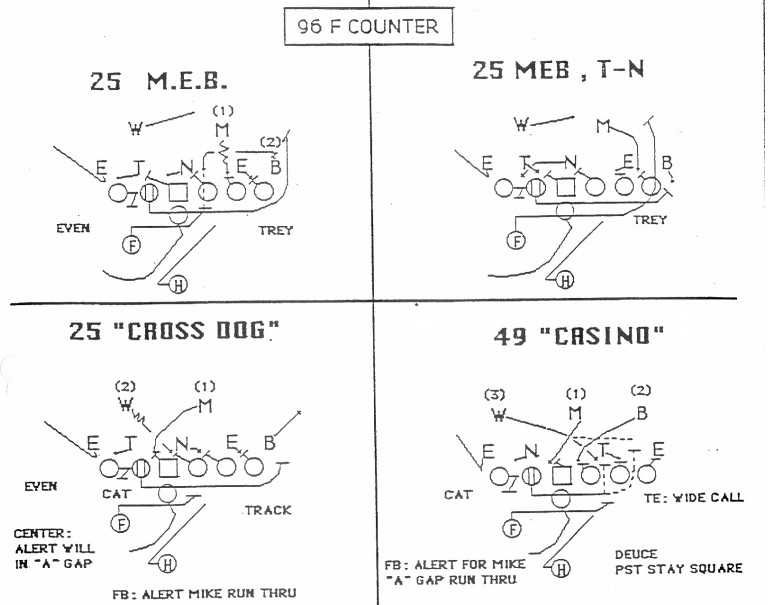 The beauty of these plays — aside from the visceral thrill of seeing hulking 300-pound offensive linemen slamming into defenders to open running lanes — is that their simplicity makes it straightforward to run them from a variety of formations, thereby keeping the defense off-balance. These subtle adjustments are what create big plays in the run game, and for old-school coaches, that means motioning and shifting tight ends, fullbacks, and even extra offensive linemen to create confusion.

“We are creating gaps,” said Shaw at the 2013 clinic. “We are making the linebackers think, ‘I did have the A-gap [between the guard and center], but wait, everyone has shifted over. Do I have the C-gap now?’ We want the defense to communicate and talk about our formations. Then we shift and they have to rethink.” This is 100-year-old football — big blockers and big tailbacks slamming straight ahead into the defense — combined with subtle sophistication stemming from formations, shifts, and slight tweaks that confuse defenders to spring big runs.

For example, in Week 14 last season, the Pittsburgh Steelers repeatedly dressed up their base Counter run with formations and pre-snap motion to gash the Cincinnati Bengals. The Steelers exploited the Bengals’ failure to adjust to heavy personnel sets, particularly when Pittsburgh motioned a tight end from one side to the other, leaving the defense exposed to the Counter. The result was 42 points and 543 yards of offense, with Le’Veon Bell leading the way with 185 yards and two touchdowns on the ground, most of them on Counter plays.


But so-called pro-style teams don’t have a monopoly on Power and Counter. The blocking schemes are so adaptable that many NFL and college teams — perhaps most notably Urban Meyer’s Ohio State teams — have successfully merged power football with shotgun spread formations. Specifically, in the second half of last season’s college football championship game, Ohio State ran Counter down Oregon’s throat en route to a 42-20 win.5 The Buckeyes combined Counter with a fake jet sweep to freeze the Ducks linebackers, and the result was vast lanes for Ezekiel Elliott to run through.6
And now we’ve come full circle: Nick Saban is old school in spirit, but he’s also practical. Not only has his Alabama team embraced spread offense concepts, it’s even borrowed the synthesis of power and spread that has become the hallmark of coaches like Meyer. Below is Alabama running back Derrick Henry’s 56-yard touchdown run versus Wisconsin on Saturday night:

Coaches and players, particularly offensive linemen, like Power and Counter not just because of the schemes, but because of the attitude they embody. If a team hangs its hat on Power and Counter and is sophisticated enough to dress them up in ways that get defenders out of position, then everyone knows what that team’s mentality is, and opponents know they’ll be in for long afternoons.

“We live for the 4- or 5-yard gains; the 4- or 5-yard gains are the body blows,” said Shaw at a coaching clinic in 2013. Despite a poor Week 1 effort in an upset loss to Northwestern, Shaw’s Cardinal offenses have enjoyed great success with power football over the past few years. “I liken us to Evander Holyfield. We are not Mike Tyson. We are going to hit you hard in the ribs during the course of the game so that when you put your hands down, then we are going to hit you with a haymaker. We are going to wear you down and take our shots when we have you down.”

That was Gibbs’s model with the Hogs, that’s the model of every pro-style power team now, and, maybe most interestingly, it’s increasingly the model for Ohio State, Auburn, and some of the country’s best spread offenses. Everyone wants Power.

'The Ropes' Podcast: Steve Farhood on Floyd Mayweather's Legacy, and a Mayweather-Berto Preview