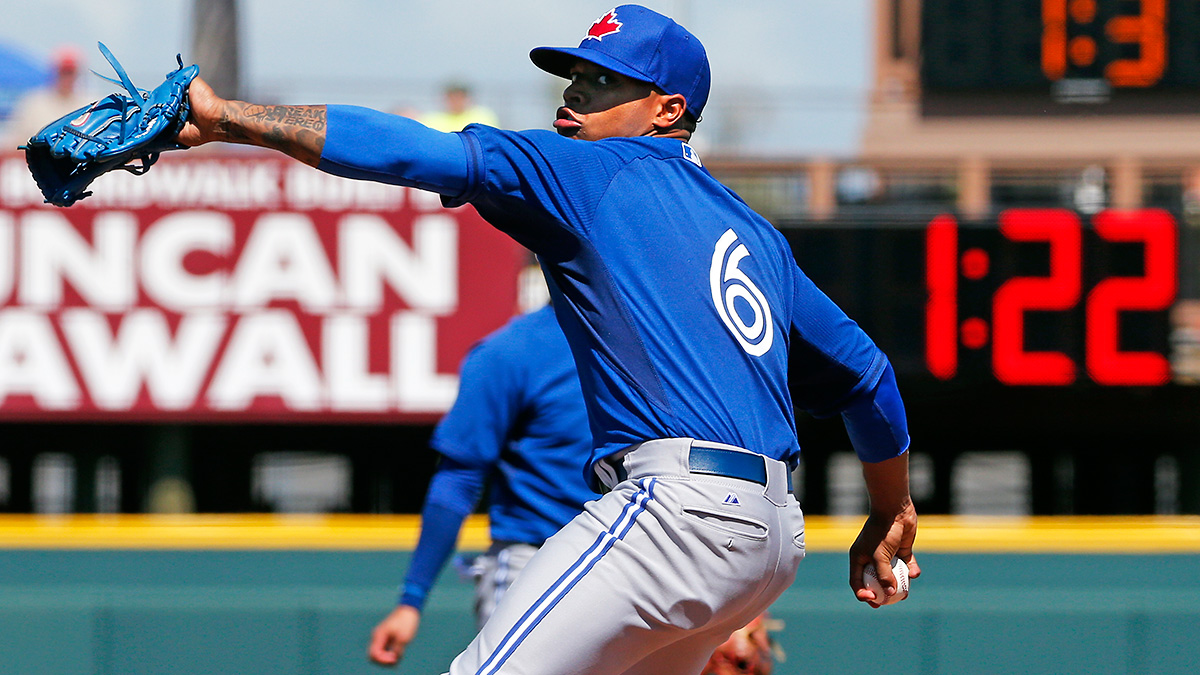 Marcus Stroman is starting tonight. For the Lansing Lugnuts, the Toronto Blue Jays’ A-ball affiliate, but still: He’ll be throwing baseballs to professional batters. Five months ago, that was something that no one but Stroman foresaw. And five years ago, the chronological realities of rehabbing from in-season surgery might have proven his prediction wrong. But Stroman’s is a special case, a partnership of personality and science that points the way toward the future of injury rehab.

Stroman’s comeback story starts with what appeared to be a knockout blow, struck on a spring training field in mid-March. During pitchers’ fielding practice, Stroman and third baseman Josh Donaldson converged on a bunt. Donaldson called off Stroman, who planted his foot on the wrong patch of grass in his eagerness to avoid his larger, charging teammate. The pitcher heard a pop, noticed that his left knee “felt hollow, kind of like it was empty,” and fell to the ground. Soon after, he visited the team doctor, who told him, “You tore your ACL.”

For the Jays, it was the worst news imaginable. Stroman debuted for Toronto early in May 2014 and entered the rotation at the end of that month, pitching to a 3.29 ERA in 20 starts, with a sub-.600 OPS allowed in a hitter’s park, a strikeout-to-walk ratio of almost 4, and a deep array of pitches, almost all of which resembled the signature offerings of other aces. Days before Stroman’s injury, Jays manager John Gibbons had predicted a big sophomore season from the righty, and the stats agreed, projecting him to be the best pitcher on what looked like a weak staff. His absence threatened to do almost as much damage to Toronto’s prospects as it did to his.

When I ask him what his worst injury was prior to the ACL tear, Stroman laughs and says, “Nothing.” Even if his past is short on sticks and stones, though, it’s long on words that would have hurt athletes who weren’t as mentally tough. At 5-foot-8, the right-handed Stroman is the shortest pitcher in the wild-card era to make more than two starts, and he’s often been labeled as a reliever and had “undersized” attached to his name. “I store all those thoughts in my head, and every single time I’m in the weight room when I’m training, that’s everything that motivates and pushes me,” Stroman says, sounding like Arya Stark before bedtime. “I knew it was just going to be another reason for people to doubt me, to count me out or to say, ‘Oh, he’s not going to be able to come back from this,’ or ‘He’s not going to be the same pitcher.’”

A patient’s immediate reaction to negative news might not mean anything in terms of long-term prognosis, but in retrospect, it seems as though Stroman’s response was a sign that he’d be back sooner than the six-to-nine-month norm. At first, the downgrade from “penciled-in Opening Day starter” to “out for the season” was “just the biggest letdown,” Stroman says. He thought about the wasted work over the winter, the missed time with his teammates, the upcoming operation, and the long road of rehab. “They left me in that room for probably a couple of minutes,” he says. He called his mom, his dad, and his best friend from home, Ryan Bahnsen. And by the time the self-consolation calls were finished, he’d come up with a plan.

“I feel like I’ve faced so much adversity in my life that I feel like I do a great job of handling it,” Stroman says. “Whatever’s thrown at me, I’m able to spin it in a way that’s positive.” In this case, the spin said “back to school.” “It just popped into my head,” he says. “I was like, ‘This is perfect. I can go back. I can kill two birds with one stone, to be able to work with the best doctors in the world and also finish my degree and also be back in September.” He called his mom back and told her he’d be returning to Duke, where he’d studied sociology until the Blue Jays drafted him with the 22nd overall pick in 2012. Minutes removed from his diagnosis and despair, Stroman had his silver lining. He went under Dr. James Andrews’s scalpel on March 19, already a man on a mission.

Coming out of his Long Island high school, Stroman chose Duke for its academics, the importance of which his supportive-but-strict family drilled into him early. He came within one semester of graduating from college, but the $1.8 million bonus the Blue Jays offered was enough to convince him to defer the dream of getting a degree, especially since he knew it might mean fulfilling another lifelong goal. Duke doesn’t offer online courses, he couldn’t transfer his credits or take time off from baseball, and he knew that if pitching paid off like he hoped it would, he’d have a hard time convincing himself to go back to being an undergrad after retirement. This rehab window was book learning’s last chance.

Starting in May, Stroman spent his school hours taking classes on hip-hop cinema and 17th-century slave society and surreptitiously keeping tabs on his team. When he wasn’t in class, he was sweating his way back to health doing two-a-day workouts six days a week, always encouraged by Bahnsen, who took the summer off to keep the social Stroman company. He worked with two physical therapists, one focused on the ACL and one dedicated to maintaining his overall fitness and preventing his arm from atrophying. The pair put him through “every single possible movement or task,” including single-leg squats and dead lifts, single- and dual-leg jumps, shuttle runs, and triangle runs. “It was almost like a combine when we got to the end of it,” Stroman says.

There weren’t many previous pitcher cases to study. According to Corey Dawkins, an athletic trainer who maintains a comprehensive DL database at Baseball Injury Consultants, only 11 major league pitchers since 1990 have had surgery for ACL tears. The most encouraging precedent is Yovani Gallardo, who had his surgery in mid-May 2008 and made it back to the big leagues that same September. But Gallardo, who was 22 at the time, tore his right knee, the one a right-handed pitcher uses to propel himself forward. Only two of the previous 10 — Paul Maholm last year and John Parrish in 2002 — tore the ACL in their landing leg, as Stroman did.

“I looked at the Gallardo case, and that was in the back of my head: ‘Oh, he did it and he came back,’” Stroman says. “But then they told me the difference between landing and pushing legs, and that kind of put it in perspective. Because you’re bearing the weight of your body on that landing leg rather than just pushing off and just having that leg in the air, so it’s definitely a lot more intense.”

Yet no matter how many tests Stroman took, he kept passing. “There was no point when I realized I was ahead of schedule,” Stroman says. “It was just the check marks that I just started to see. All of my check marks when I first got there were red, and then they would just show me glimpses here and there of all the things I’d accomplished, and it would slowly turn to yellow, and from yellow to green. And then we would just keep moving down, down, down.”

Dr. Robert J. Butler, interim director of Duke’s Michael W. Krzyzewski Human Performance Laboratory, helped Toronto oversee Stroman’s recovery and confirms that a fanatical work ethic, plus the natural healing ability of a 24-year-old body, played important roles in his progression. “Marcus is special as a person in general, whether it’s genetic or whether it’s … his positive outlook on life, his commitment, his desire,” Butler says. So far, nothing in Stroman’s performance suggests that his positivity, which peppers his texts, tweets, and speech with exclamation points, is misplaced. But Stroman’s effort and attitude aren’t his only edges. He also has 2015 technology.

The harness that Stroman wears during his workouts — which many Twitter cutups have described as a sports bra — is actually a wearable sensor, the product of a company called Catapult that has cultivated a long list of sports-industry clients but has only recently begun to branch out into baseball. The device measures athletes’ movements and their attendant physiological loads to track progress and determine when to ease off the intensity.

Butler’s team used the Catapult system to search for “the right amount” of stress: Too little and Stroman’s improvement would slow unnecessarily, but too much and he’d risk suffering a setback that could end any hope of a 2015 return. Because the Jays had used the same system in spring training, Butler could compare Stroman’s readings to his pre-injury baseline. But they also tried to factor in the psychological strain of Stroman’s schoolwork and separation from the Blue Jays with Polar heart-rate monitors and Omegawave sensors, which measure heart-rate variability and other indicators of overwork. “Using the Omegawave technology, we could simply figure out, do we need to provide a different type of activity to potentially give some wiggle room to allow for good training to happen today, or is he just really so stressed out that we just need to go light and figure out some other interventions?” Butler says.

The personalized data that the Duke team gathered on Stroman allowed him to push forward faster than he would have with a one-size-fits-all regimen. “We’ve always gone from this chronologic base — Week 6, Week 8, Week 10,” Butler says. But “chronologic protocols don’t allow for five-month comebacks from ACL reconstruction.” The key advantage to this data-driven approach is its capacity to eliminate the therapist’s bias toward a particular timeline or sequence of exercises, allowing the athlete to progress not when his doctor estimates that his body is ready, but when his body announces it is. It also allowed the Duke team and Toronto’s training staff to communicate clearly and base their decisions on objective observations. “Because we used the data, we could train him 11 times a week in a progressive manner and really continue to make gains,” Butler says.

When he takes the mound tonight (with two of his therapists in attendance), Stroman will be limited to 65 to 70 pitches. If all goes well, he’ll move up to Triple-A Buffalo and throw 85 to 90 next Monday in Pawtucket, after which we could see him back in the big leagues as soon as September 12. He’d prefer to stay in the rotation, but Toronto’s staff is more stacked than it was when he went down. At the trade deadline, teams with aces to sell tried to pry Stroman away from Alex Anthopoulos, but Toronto’s GM kept Stroman and still landed a rental ace, David Price. Now he might be close to putting the two together, which would be a potent combination in October regardless of Stroman’s role.

Throughout much of the rehab process, Stroman was frustrated that he couldn’t do anything to assuage the underachieving Jays’ pitching problems. Lately, he’s minded missing out on the team’s red-hot run, as well as the company of Price, one of his biggest role models. Either way, school was a welcome distraction, as was the dream car he splurged on when he finally finished his degree.

My first words to Stroman were a joke about jinxing him by calling to discuss his comeback when it wasn’t quite complete. But he wasn’t worried. When you have hard data, you have less use for superstition.

“I’m in the best shape of my life,” Stroman says. “I know people say that, but I can prove it with numbers.”

Past Is Prologue: Key NFL Story Lines for 2015