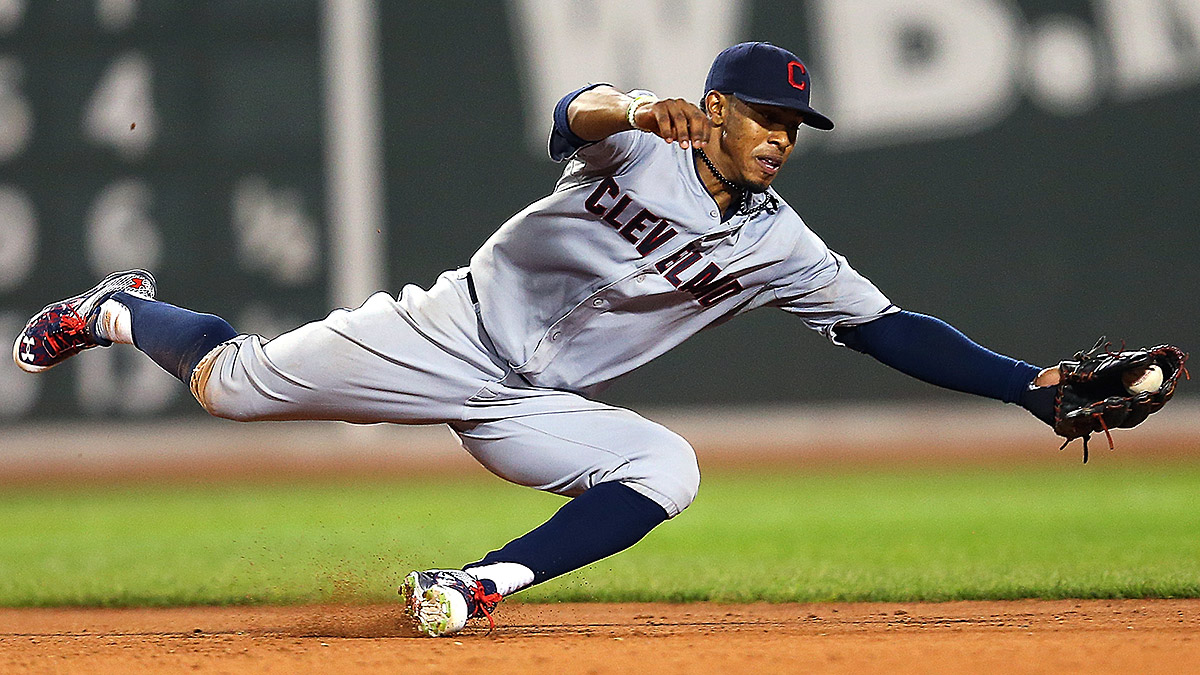 For the first 2 percent of their schedule, the Indians’ 2015 season went swimmingly. In their opening series, they took two of three on the road, shutting down Houston behind Corey Kluber, Carlos Carrasco, and Trevor Bauer. The Astros managed only eight hits and three runs. This wasn’t a surprise: The Indians were likely division winners, if not favorites to win the World Series, and the Astros, as everyone knew, weren’t yet contenders.

But then the Indians made a crucial mistake: They played a fourth game. In that contest, they allowed 18 hits to the Tigers. And instead of taking the hint, they played a fifth game the following day, allowing 14 hits. It was hard to feel sorry for them when they stubbornly insisted on playing a sixth game, in which they allowed 11 hits, lost again, and fell further below .500, where they’ve been ever since.

Allowing double-digit hit totals in three consecutive games during the first week of the season does terrible things to a team’s Defensive Efficiency, a measure of the percentage of balls in play it turns into outs. The gap between good and bad Defensive Efficiencies sounds very narrow: 73 percent is strong, while 68 percent signals an urgent need for improvement. Even in the current high-strikeout era, though, the typical pitching staff allows more than 4,000 balls in play per season, so adding or subtracting a few percentage points can still mean a difference of hundreds of hits. 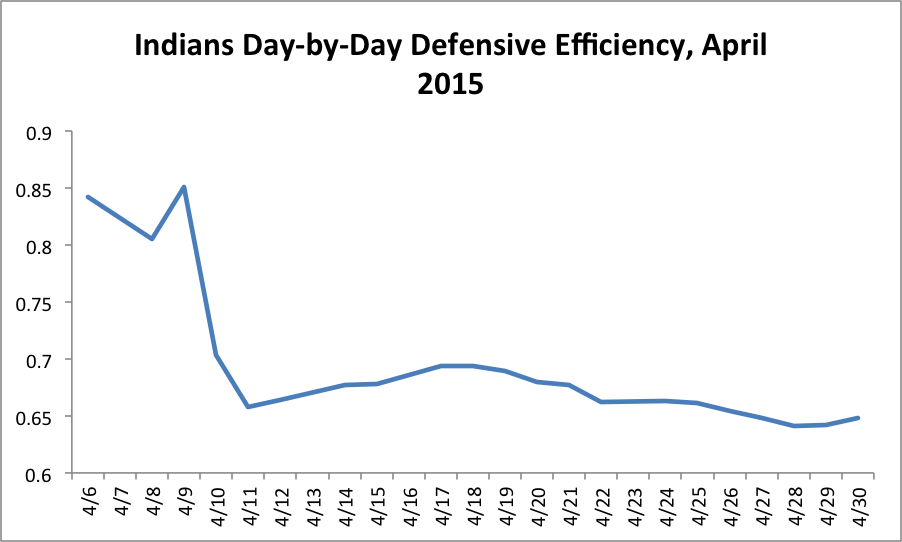 The Indians experienced severe struggles on defense in 2014 — they finished last in DRS and UZR, which contributed to them finishing three games out of the wild card — so they weren’t expecting miracles this spring. But they did expect to be better. “We were very cognizant of our defensive issues throughout the duration of last year,” Indians GM Chris Antonetti says. “We were hopeful as we began the season that our defense would be improved, and some of the players that were returning from 2014 to 2015 would perform better defensively than they had the prior season.”

Early on, though, it looked like time was only worsening the wound. The Indians finished April at 7-14, and while that wasn’t purely the fault of their defense — the team was struggling to score runs, too — the pitching staff’s nastiness made the fielders’ failings stand out. Indians pitchers struck out batters at a higher rate in April than any other AL team, which minimized the damage the defense could do. At the same time, the porous defense (even on the mound) disguised the staff’s skills. Through April, the gap between the Indians’ ERA (4.54) and FIP (3.49) was larger than any other team’s, which was all the more glaring given that high-strikeout pitchers tend to allow fewer hits on balls in play. Even Cleveland’s ace was affected: Seven starts into his season, defending AL Cy Young Award winner Kluber’s ERA was over five, which spawned a series of “What’s wrong with Corey Kluber?” posts. Most of those articles concluded, correctly, that Kluber’s only problem was the defense behind him. And racking up 18 strikeouts per start wasn’t a sustainable solution.

On May 8, Sports Illustrated’s Cliff Corcoran asked, “Are the 2015 Indians the worst-fielding team in modern major league history?” At the time, it wasn’t a preposterous question, but it was about to be. May 20 was the last day that the Indians’ Defensive Efficiency sat below the 2007 Rays’. It was also their low-water mark in Defensive Runs Saved: minus-25, which ranked second worst after the Phillies’ minus-34. On May 21, Cleveland’s Defensive Efficiency finally broke the Tampa Bay barrier. And it hasn’t stopped climbing since. 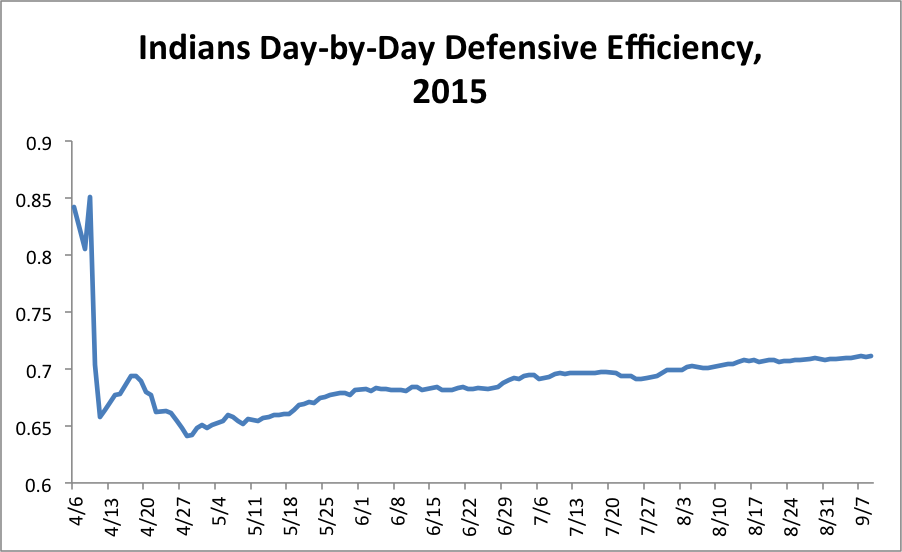 The Indians are playing like a different team on defense because they’ve thoroughly reshuffled their roster. Foremost among the changes is a shiny new left side of the infield. “We knew that if we got to a point in time that we felt we weren’t making the progress we hoped as a team, that we had a couple of very good defensive options for us in Triple-A in Francisco Lindor at shortstop and obviously Giovanny Urshela at third base,” Antonetti says. “We felt pretty confident in their defensive ability to come up and contribute at the major league level.” That point in time was mid-June, when the 23-year-old Urshela and the 21-year-old Lindor arrived within a week of each other. Despite his late arrival, Lindor already leads all AL shortstops in DRS, and Urshela also rates above average.

In addition to promoting from within, the Indians also added by subtraction, trading or demoting corner outfielders Brandon Moss, David Murphy, Nick Swisher, and Jerry Sands, all of whom were among their worst defenders and weren’t producing enough at the plate to justify their costly innings in the field. They filled their right-field vacancy in the usual way, by moving a third baseman with zero professional outfield experience.

When he volunteered to try the outfield in Triple-A, Lonnie Chisenhall hadn’t played there since college, aside from shagging during BP. But it took him only four games in Columbus to convince Cleveland that he could be an everyday option. The day after the Indians traded Moss to St. Louis, Chisenhall made his first major league start in right field. He immediately excelled there, earning recognition as ESPN SweetSpot’s Defensive Player of the Month for August. “I’m not sure anyone could’ve sat here and said that we expect him to be able to transition from third base to the outfield and become an above-average right fielder right away,” Antonetti says. “But to Lonnie’s credit, he has.” The Indians have also used displaced infielder Jose Ramirez in the outfield for the first time in his MLB career, and they’ve gotten good work out of Abraham Almonte, a deadline pickup from the Padres who replaced a slowing Michael Bourn in center after the Indians dealt Bourn to the Braves. “We had good reports on [Almonte], and again I’m not sure we would’ve necessarily expected it to translate exactly the way it has,” Antonetti says.

So what lessons can we draw from the Indians’ on-the-fly upgrades? First, draft Francisco Lindor, if you have the chance. (This one might be tough for other teams to mimic.) Second, don’t be afraid to trade offense for defense if the result will be a net benefit. “[We] try to appropriately weigh the trade-offs between run scoring and run prevention,” Antonetti says. “And in each of those cases, we felt like we were losing productive offensive players, but we did think we had the ability to maybe improve a little bit defensively with some of the other options that we had.” And third, don’t fall prey to functional fixedness. Even if a player is competent at his current position, as Chisenhall was at third, he might make more of an impact at a different spot where the team has less depth. Never overlook the potential for value via versatility.

It’s easy to imagine a scenario in which the Indians’ early defensive struggles wouldn’t have prevented them from playing postseason games. They have a far better Base Runs record than the three teams they’re trailing in the wild-card race, but their actual record reflects their MLB-worst cluster luck. In part, that could be because the Indians, who’ve allowed the lowest opponent BABIP with the bases empty (.268), are tied for the highest BABIP allowed with runners in scoring position (.326). “Those are a lot of the things we’ve talked about within our group, how much of that is chance and how much of that is controllable,” Antonetti says. “There’s definitely a psychological component to it, and how you quantify that is hard to say.”

Maybe Cleveland deserved better, but there’s a good chance this will be the second season in a row in which April is the Indians’ lone losing month and the team finishes within disappointment distance of a postseason spot. “It’s a similar story that we encountered last year — we ran out of season,” Antonetti says. “We played our best baseball by far in the second half after not getting out of the gate the way we would’ve hoped, and I think we’ve seen a similar trend this year. So obviously if it was an easy fix, or if we knew exactly how to time things to play well, we would be doing it.”

Antonetti says the Indians will spend the offseason asking how they can do a better job of positioning themselves to get off to better starts. But by erasing their defensive disadvantage, they probably already have.

The stats in this piece reflect action through Wednesday’s games. Thanks to Rob McQuown of Baseball Prospectus and Scott Spratt of Baseball Info Solutions for research assistance.