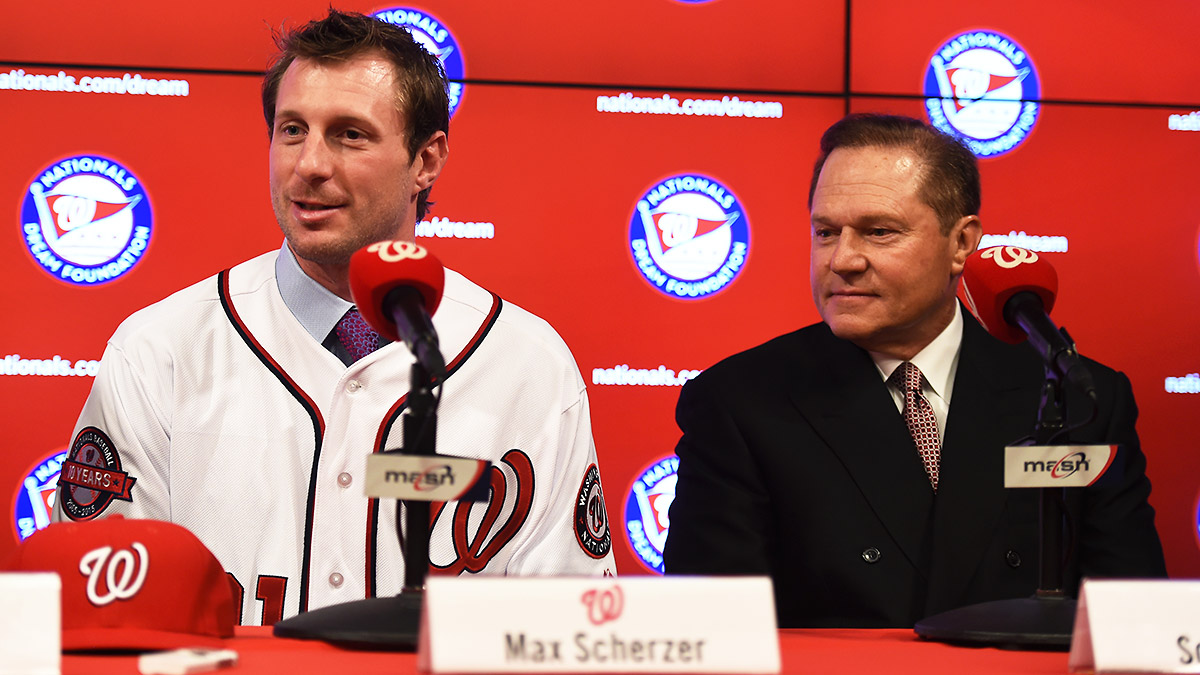 When agent Scott Boras was selling free-agent pitcher Max Scherzer to teams this winter, he had an information edge at his disposal: a $7 million computer system and accompanying database operated by two-dozen staffers, including numerous engineers from MIT and other elite universities.

“I always tell everyone, ‘These are the schools I couldn’t get into,’” says Boras, who has three degrees of his own: a bachelor’s, a law degree, and a doctorate in industrial pharmacology, all from the University of the Pacific.

Boras’s team presented suitors with a nearly 50-page binder on Scherzer. One of the concoctions within was “The Pitching Odometer,” a system that attempts to measure a pitcher’s wear and tear by monitoring workload rather than age; Boras’s team had conducted a study that showed that throwing at least 185 innings per season between the ages of 26 and 29, as Scherzer had, “seems to be a footprint for durability,” portending longevity deep into one’s thirties. Boras also noted that Scherzer’s career strikeout rate — 9.6 per nine innings, the highest among active starters with at least 1,200 innings entering the season — was the result of his “pitch variation rather than raw velo.”

Scherzer eventually signed with the Nationals for seven years and $210 million — one season and $55 million more than the contract that his free-agent peer Jon Lester, who is not a Boras client, agreed to with the Cubs.

As MLB franchises have begun dedicating more resources to in-house analytics, the dynamic for marketplace negotiations has shifted. Few agencies are able to woo teams with stats that those teams don’t already possess, making Boras and his considerable investment an exception in the industry. Today, only the largest and most financially robust agencies can afford to seek data that clubs don’t already possess. And even then, it’s not always enough.

“I think there’s less selling of your players because of technology,” one competing agent says. “[Teams] know more about our player than we do. They’ve got 20 more people working on the stats and sabermetrics.”

The range of agent presentations is vast, and some of the more statistically inclined clubs have ignored the majority of these reports for years, confident that they hold the information edge over agents.

“I feel like we’ve had that edge for about 10 years or so,” one NL executive says via email. “Those books are a total waste. They are a paper weight. You were never going to convince us.”

His front office’s prior advantage has dissipated, the executive notes, because “those last five or so teams have caught up,” shrinking the knowledge gap across the sport.

Around baseball, free agency has taken on more of a “we’ll call you” tenor.

“I do feel like teams focus now more on what they feel they need versus what might be peddled their way,” Cardinals general manager John Mozeliak says. “Clearly, I think having a strong analytical or statistical group helps drive that because you have a better understanding of what you’re really looking for.”

Mozeliak adds that “what you’re able to search on a player and the due diligence you can do just from your own laptop — that’s advanced quite a bit over the last 10 years. Just the amount of information, how you compile it and how you value it, is just far greater than it was 15, 20 years ago.”

Unlike most player representatives, who might not be able to compete with the information that most MLB franchises already possess, large agencies such as Boras Corporation and Creative Artists Agency have the enviable resources necessary to develop proprietary data. Boras says that he spoke with Brewers owner Mark Attanasio 31 times while negotiating a contract for starting pitcher Kyle Lohse two years ago. Among the data Boras presented during those presentations was a proprietary study correlating the winning percentage for young starters with the presence of a veteran like Lohse on the staff; the report also showed how much more value such a pitcher offers over a first-round selection, which the Brewers would be mandated to give up to sign Lohse, who carried a draft-pick compensation penalty; Boras says he told Milwaukee the difference could total up to $10 million to $15 million.

“The lawyer side of me says that you have to take algorithms and information that you know to be true,” Boras said. “You have to simplify them and then you have to label them so that they’re easily understood.”

Boras’s binders are distributed only to teams that are serious about his clients,1 which limits the exposure of his innovative research to others who might try to copy or reverse-engineer his findings.

Brodie Van Wagenen, the co-head of the CAA Sports baseball division, says via email that while teams might evaluate the market more broadly, his group seeks to identify specific ways in which a client best fits a given team, using a more targeted approach for both the research and sales-pitch phases.

“Recently, we worked with a client who did not enter free agency after his best statistical season,” Van Wagenen says. “We used complex analysis to recreate the player’s statistical profile in order to more accurately demonstrate his future potential. This convinced two teams to enter the process that had not previously been engaged, resulting in more options for a client.”

Unlike their counterparts at mega-firms, agents at smaller firms may choose to spend less time on persuasion and more time on the parts of the job where they’re not at a competitive disadvantage: fielding offers, negotiating salaries, and advising clients on best fit.

Agent Joshua Kusnick, who runs his own business and represents four clients on big league 40-man rosters, detailed a situation in which he advised reliever Jeremy Jeffress, who was designated for assignment by the Blue Jays last April, to take a little less money for a minor league deal with the Brewers, who drafted him and for whom he made his big league debut, rather than stay in Toronto’s organization and face a more cluttered path back to the big leagues. Jeffress reached the majors in Milwaukee last July and posted a 1.88 ERA in 28.2 innings.

“My job has evolved,” says Kusnick, who has represented big league clients since 2006. Instead of relying on proprietary data and focusing on the sales pitch, Kusnick emphasizes understanding a player’s personality, makeup, and family situation, as well as each organization’s depth chart, to ensure that each client lands in a favorable spot.

Even amid a changing landscape, both Kusnick and the NL executive say that persistence can pay dividends. Trust and relationships remain more important than any data-driven edge, Kusnick says. Over time, a club’s thinking on how to fill its roster may evolve, or a new need may emerge, and having a strong interpersonal foundation in place can be key when those changes happen.

For this reason, a related trend has emerged: More agents are placing their clients in front of team executives to make sure intangibles are highlighted.

“I think you see more in-person meetings,” Rangers general manager Jon Daniels says. “If a player has a kind of dynamic personality or leadership skills, I do think there’s an opportunity to sell that side of it.”

Off-field information, such as work ethic, personality, and other intangibles, can also be conveyed through a network of contacts — former coaches or players who work elsewhere but remain in touch.

“Your ability to play the six-degrees-removed factor is pretty easy,” Mozeliak says.

In today’s game, there’s more information available about players than ever before. For all but the elite agents, however, less of that information originates with the clients’ representation. The act of gathering data is evolving fast, and the art of shopping talent is shifting alongside it.

The 30: Pitching Is No Panacea