Rembert Explains the ’80s: Michael Jackson at the 1988 Grammy Awards 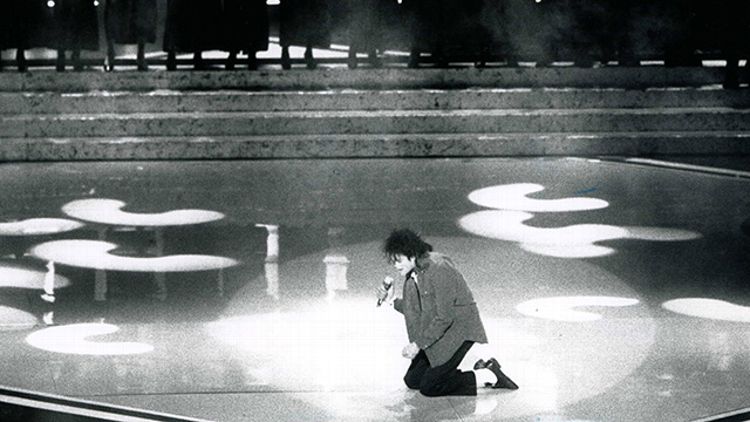 Welcome back to our series Rembert Explains the ’80s. Every so often, we’ll e-mail 25-year-old Rembert Browne a video from the 1980s that he hasn’t seen. Rembert will write down his thoughts as he’s watching the video, then we’ll post those thoughts here. This week’s installment was selected by Rembert Browne, BECAUSE IT’S STILL BLACK HISTORY MONTH AND I’M CALLING THE SHOTS: “The Way You Make Me Feel”/”Man in the Mirror” by Michael Jackson, from the 1988 Grammys. If you have an idea for a future episode of Rembert Explains the ’80s, e-mail us at hollywood@grantland.com.

[Note: This is the greatest awards show performance of all time. Know that.]

0:03 Don’t underestimate how famous you have to be for other famous humans to go crazy at the mere sight of your silhouette.

0:22 Also, do not take it lightly that the Grammys gave Mike 10 MINUTES.

Also, I should get this out the way now: I refer to Michael Jackson as “Mike” more often than not. When I was young, it made me feel like he was a friend of mine, and I’ve stuck to my guns since. Sometimes “Michael” happens, but not often. MJ, never.

0:29 I love the way he walks down stairs. No one’s ever walked down stairs like Mike.

0:34 Shout out to the Grammys for informing the one person on Earth who didn’t know who was onstage:

That one person appreciates you, Grammys.

I can’t count the number of times I tried pulling off this look in the privacy of my own home, and then quickly hanging my head in shame for attempting to be something I’m not: a legend.

0:52 The belt, which he most certainly stole from a karate outfit or a hotel robe, really pulls it all together. Also, that shirt is SO BLUE.

I’ve never seen a bluer piece of clothing. It’s like the Atlantic Ocean is sitting atop his waist.

0:53 Michael Jackson was most certainly not a Crip, but they had to be pleased with this shirt.

0:54 [Disclaimer: I have no idea if Michael Jackson wasn’t a Crip.]

0:56 “Tough Guy Mike” is an incredible creature, less because it was so opposite of his actual personality, and more because of how he moved his limbs as Tough Guy Mike. Every step became an aggravated kick, everything was to be pointed to, and his neck roll became the sassiest thing ever captured on camera.

1:23 It’s hard not to get distracted by the movements of Tough Guy Mike, but it should be noted that (1) “The Way You Make Me Feel” is phenomenal, especially slowed down like this, and (2) there are still nine minutes in this performance.

1:27 There’s nothing Tough Guy Mike loves more than THE LADIES.

Also, the hat has been thrown across the stage. Also, spin count: 3.

1:40 One of Mike’s most underrated moves is the simple foot tap, but with one hand snapping and the other in his pocket. It’s just the perfect step. Also: The Crip shirt has become fully unbuttoned, which allows for a good amount of future-cape action and more dynamic spins. Excited for that.

2:29 Mike and his boys are so good at dancing, they can go 30 seconds at a time without singing a single word. And it never becomes less captivating. Just one of the thousands of things no one else can pull off.

With his boys watching, Mike starts doing that slow spin/body roll/vertical worm in which he locks up most of his limbs but, due to his phenomenal ankle work, manages to still rotate.

3:08 The song’s over and the crowd is cheering. More important: LOOK AT MIKE’S HAIR.

He’s like a magical faun with a curl. Very rare.

3:14 So Mr. Jackson just bowed, and, in the eyes of the audience, that’s all they get. And they’re thankful, because for three minutes, Mike put on an incredible show. It’s just crazy to think they hadn’t the first clue that there were seven more minutes left.

WHOSE HAND IS THAT? I want to know everything about the human owner of the hand that tenderly touched Michael’s hand as it passed him the microphone. Everything.

3:22 The first few notes of “Man in the Mirror” do things to me, spiritually. I can’t explain it, but I know the journey that I’m about to go on, and it’s always a beautiful, teary roller coaster.

4:12 The reason this song and, as we will see, this performance are so good is that Mike has all of the human emotions, and they’re all expressed in this one clip.

Hey, more ladies and a man who looks like Peabo Bryson:

5:35 Mike just did two classic “My name is Michael Jackson and I am very emotional” moves: the frantic shaking of the non-microphone hand and the high step. He’s feeling it.

THERE ARE STILL FIVE MINUTES LEFT.

And Mike hasn’t even gotten in the zone yet.

6:01 One thing you have to respect about Mike is how much ground he covers on this giant stage. He’s been everywhere. Just a complete dedication to his craft, as well as respect for the surface area of that stage.

6:04 Something worth noting: Michael Jackson is actually singing.

This is the moment this performance starts to get real.

6:23 It’s hard to notice initially, but not only is this choir in full force in their Crip robes, but every few seconds, they get closer and closer to Mike. Just watch out for it. It’s great.

6:29 Mike just Eastside Stomped all over the Grammy stage. He is the chosen one.

If you aren’t moved by this, you don’t have a soul.

Few people have ever “left it on the field,” like Michael Jackson at the 1988 Grammys. No one’s ever done anything like this.

AND THERE ARE STILL FOUR MINUTES LEFT.

6:46 Perhaps the most puzzling shot of the video, because everyone in the audience is sitting down.

I just don’t get it. I don’t know how you remain glued to your seat as new religions are being formed onstage.

6:50 Mike’s standing back up, but you have to know that’s a temporary thing. Also, look at the ground that the choir has covered.

They’re coming for Michael. Because he needs them. And they need him back.

Also, pay close attention to Mike’s crouched-over bop. Right now, it’s decently controlled, but over the next few minutes it begins to have a mind of its own. And there’s nothing better than when that happens.

This is the point that this goes from a classic performance to the best performance. The next three minutes are EVERYTHING.

7:18 Yes, Mike’s microphone went out for two seconds, which is made worse because the audience is loudly clapping, probably because some of them think the song is over. While temporarily unfortunate, you can hear Michael shouting the lyrics, further proof that he is, in fact, actually singing.

7:44 Michael is shouting ad-libs at the audience, which is important, because if there’s one thing this performance is, it’s a sermon. He’s just up on that stage, converting lost souls.

I’ve seen this hundreds of times, and I’m still a mess, mainly because I still know we haven’t gotten to the best part.

HE SPUN AROUND FIVE TIMES AND LANDED ON HIS KNEES IN THE DIRECTION HE WANTED BECAUSE HE’S PERFECT.

Seriously, do you know how hard it is to do that? I’ve been trying to land that five-spin, land-on-knees move without breaking my legs or vomiting by revolution three since I was 7 years old. I’m approximately 0-for-750.

8:17 In our eighth minute, we finally reach the filthiest breakdown in a live performance that I’ve ever heard. It’s just disgusting how good this is. And that’s only aided by the fact that Michael is writhing on the floor.

8:27 My indicator of deciding whether or not someone is important is if one of your background singers comes to check on you, emotionally, in the middle of the song.

That’s what just happened, and it’s phenomenal. Also, he helps him up. All that’s missing is the James Brown robe-over-the-shoulders move.

8:34 The background track in the song is gone, and all that’s happening are foot stomps, hand claps, and voices. This is not the Grammys. This is church.

8:45 What I previously said about Mike’s crouched-over bop eventually having a mind of its own: Well, yes, that’s happening right now. He’s lowering his shoulder like a running back, all while continuing to do incomparable ankle work. Stunning leg work all around, really.

Respect this mythical creature and his hops.

9:04 Before we get into Michael’s best spin of the night, pay attention to the way he collects himself, pre-spin. He takes a bunch of little steps that by themselves look silly, but are fantastic considering the end result.

9:13 I think Michael has blacked out. I don’t think he has any idea where he is.

9:20 And now he’s deep-voice scatting and screaming. Yep, definitely blacked out. One hundred percent thinks he’s in Gary. So pleased with him.

9:26 The breakdown is over, the background track is back on, and now Mike is ready to bring this home, late in minute nine.

9:27 Every time I make it to this point, I have to remind myself that “The Way You Make Me Feel” took place on this same stage, which is mind-boggling.

9:35 Mike is telling everyone to stand up.

Look how frizzy his little curl mullet is. That’s what hard work looks like.

And everyone loved it:

Same to you, Michael. Always.