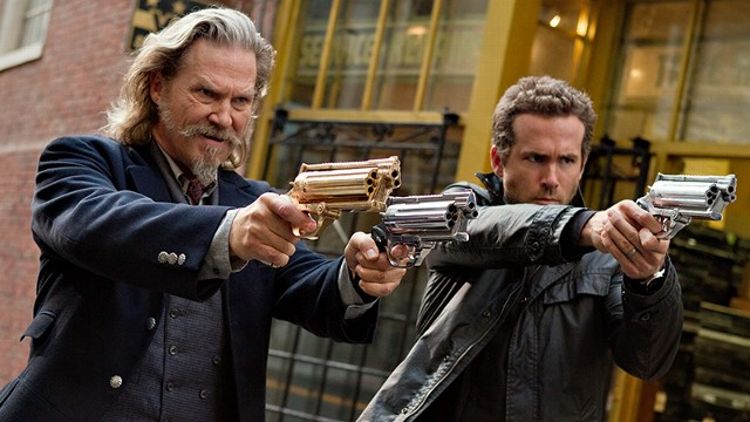 Every once in a while you see a bad movie and wonder how more of them aren’t worse — a film so shitty on so many levels that you can’t believe no one involved with the production could see that nothing was working. R.I.P.D. is that kind of bad. It’s so bad, it puts other movies’ badness in a new light. What was so tiresome about Man of Steel, so careless of World War Z, and so depressing in Grown Ups 2 doesn’t matter when you’re faced with something that feels more like a willful accident than a film.

These are not absolutely objectionable choices. Just stupid ones. Ghost is Ghost. And Ghost worked because you believed that Swayze loved Demi Moore and that she loved him and that Whoopi Goldberg was a very funny (if obviously problematic) conduit for the metaphysical and supernatural extension of that love. Just remake Ghost. Or just do another Nicholas Sparks movie — those are Ghost in platform flip-flops.

But it seems unwise to turn Ghost into another movie that trashes a city (Boston) and in which the odd-couple cops try to stop the backstabbing Tony Goldwyn character from Ghost — played by Kevin Bacon here, using his Mystic River accent — from assembling a device that opens a portal that will send what appears to be a gushing cyclone of billions of undead monsters to Earth. But someone said “yes.” Someone also said “yes” to the title R.I.P.D., wagering that no one would think the resulting movie would be about cops in Rhode Island, and that it would be good enough to overcome the inevitable puns and putdowns that the title so desperately invites. They also said “yes” to casting Ryan Reynolds as the Swayze cop and Jeff Bridges as Wild Westman. They’re so bad together that you wonder if they shot their scenes separately and just spliced them together. As it is, they’re acting past each other.

Much has been made about how Johnny Depp has entombed himself in riskless caricature. Well, Bridges appears to be equally stuck. This might be the third movie he’s made in the last six years in which I had no idea what he was saying for long stretches. He’s become grizzled and gravelly. He likes his Big Lebowski Dude persona so much that he’s just Zen-ed out now. Here it’s like a Parrothead doing dinner theater at a drive-in.

Because Bridges and Reynolds’s zombie-hunting police work requires them to walk undetected among clueless earthlings, the R.I.P.D. fashions each officer with an avatar. So in various cutaways, Reynolds’s character becomes a schlumpy Chinese American grandpa, played by the 84-year-old showbiz veteran James Hong. Bridges becomes a babe, played by the swimsuit model Marisa Miller, whose participation brings chilling clarity to a possible universe in which summer movies are distributed by GoDaddy. Poor Stephanie Szostak is in the Demi Moore part. She played a screenwriter’s predictable fantasy of a sexy French lover in Dinner for Schmucks, a movie that’s like having a hippopotamus sit on your face. If she’s worse off here, it’s only because the hippopotamus has a bigger ass.

More than once, R.I.P.D. reminded me of Ralph Bakshi’s Cool World, a fantasy that strived to combine live-action and animation, crime, sex, and critters. That movie didn’t work for the opposite reason that R.I.P.D. doesn’t. In almost every scene you could feel someone saying “no.” But at least with Bakshi there was a vision at work. Robert Schwentke directed R.I.P.D. — which has been adapted from a graphic novel by Peter M. Lenkov — and presumably someone said “yes” to him because his previous action movie, Red, was a hit. (Its more fun sequel opens this weekend, with a different director.)

In fact, someone appears to have said “yes” to Schwentke over and over. “Yes” to putting Mary-Louise Parker (who plays the humorless dispatcher) in white go-go boots. “Yes” to effects that don’t always seemed finished. And worst of all, “yes” to making the zombies computer-generated grotesques that run up and down skyscraper façades and do very little to distinguish themselves as creatures an audience would find funny or scary or interesting. I watched this movie with three chatty strangers on Thursday night in an otherwise empty theater. Universal couldn’t say “no.” Looks like that’s our job now.

Video on Demand Report: Kick Off the Second Half of the Baseball Season With 42