How ‘Breakin’ 2: Electric Boogaloo’ Became a Movie and Then a Meme 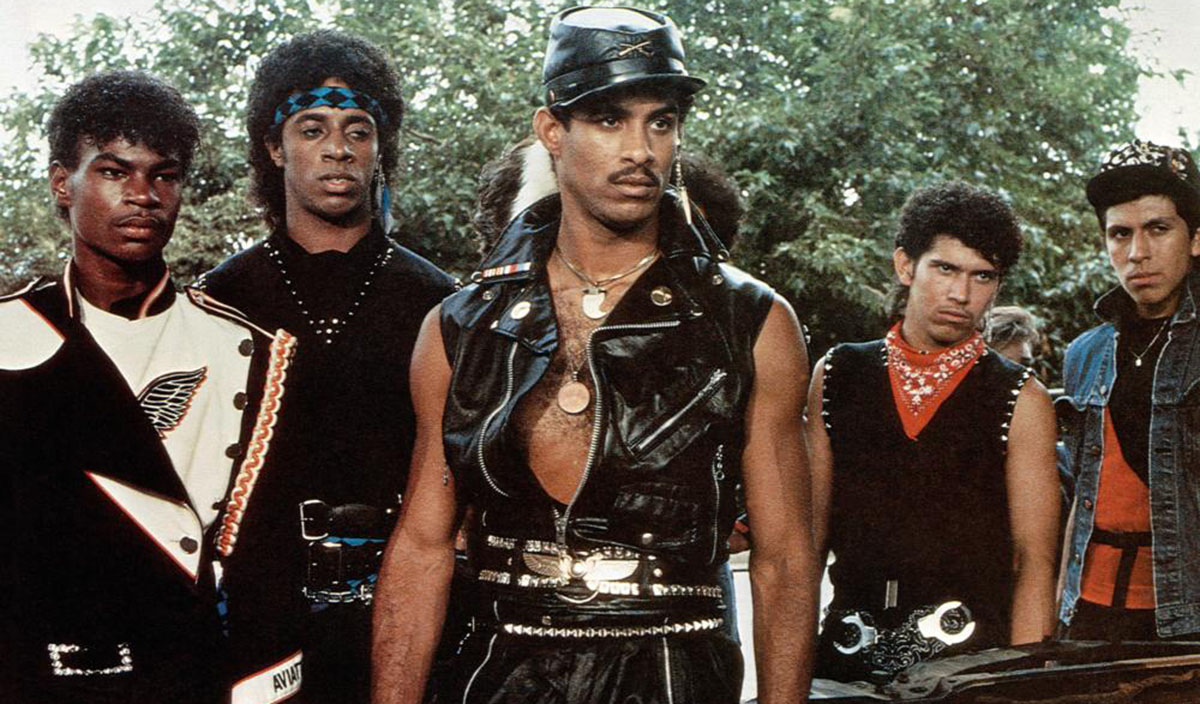 Breakin’ 2: Electric Boogaloo, the December 1984 sequel that inspired these wisecracks, remains an Internet favorite after 30 years of critical apathy. And yet it’s hard to imagine that most 19-year-olds sitting at home on Thursday night, tweeting stupid fill-in-the-blanks jokes, are aware of their own references. To many, Breakin’ 2: Electric Boogaloo is just a title taken at face value. Beyond that … well, who knows? Turns out the people behind Electric Boogaloo barely knew what they’d created, a history that makes its status as the lowest-common-denominator Twitter joke even more amusing.

The “boogaloo” vibe had at least 50 years on Electric Boogaloo. The word’s etymology is fuzzy and oft-debated, both a Latin musical movement exploding in ’50s and ’60s New York and a phrase that emerged from the Deep South’s boogie-woogie piano scene. Mixing cultures birthed blended sounds, “boogaloo” encompassing everything from bossa nova to R&B and soul. Celia Cruz, the Queen of Salsa, had a boogaloo song. James Brown had a boogaloo song. Ringo Starr had a boogaloo song with an incredible Frankenstein’s Monster–themed music video. Brown even shot an instructional video on how to perform his version of “The Boogaloo.”

Part of Breakin’ 2: Electric Boogaloo‘s charm is its complete disregard for the boogaloo’s recorded history. The movie was the brainchild of Yoram Globus and Menahem Golan, two Israeli producers whose production company, Cannon Films, took American cinema by storm with a cavalcade of low-budget shoot-’em-ups, ninja bloodbaths, sci-fi camp, and the occasional “serious” indie (including Norman Mailer’s Tough Guys Don’t Dance and Andrey Konchalovskiy’s Shy People. Globus and Golan churned out genre pictures, their quantity-over-quality mantra keeping Charles Bronson, Chuck Norris, and Dolph Lundgren employed through the ’80s and early ’90s. Understanding the duo’s high requires seeing them in action, which is where the new documentary Electric Boogaloo: The Wild, Untold Story of Cannon Films comes in:

Breakin’ was Globus and Golan’s reaction to Flashdance. What if they took Frosty Freeze and Rock Steady Crew’s big dance number from the Jennifer Beals–led drama and stretched it into its own movie? Breakdance was on the precipice of a cinematic moment. 1983’s Wild Style and the documentary Style Wars made blips in smaller circles. Competition was right on Globus and Golan’s heels, with Beat Street and Body Rock arriving within months of Breakin’s release. The producers didn’t know the first thing about breakdance culture, but that hadn’t stopped them before. They hired writers, recruited young dancers from East L.A. — including Adolfo ‘Shabba-Doo’ Quinones and Michael Chambers — threw together a crew, and had Breakin’ out in theaters just over a year after Flashdance. And it was a huge hit, grossing nearly $38 million. 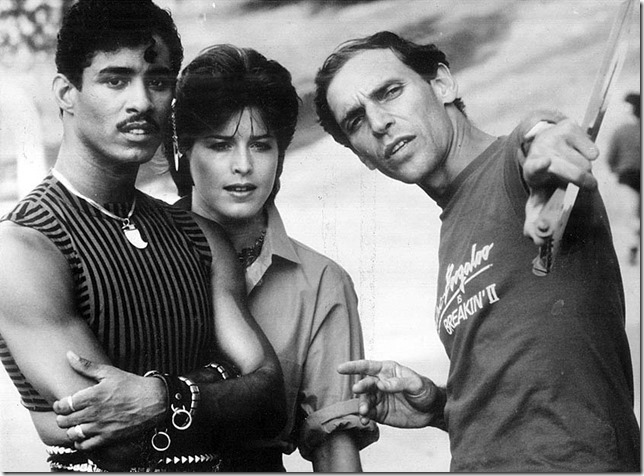 While pitching Breakin’ to distributors at the 1984 Cannes Film Festival market, Globus and Golan already had their eyes set on a sequel. But Chambers says the producers had trouble selling the film to international vendors who didn’t understand the intricacies of breakdancing. A scene from Breakin’ where Chambers glides around a balancing broom like a pop-locking David Copperfield wowed audiences, but when asked to describe the style, Globus and Golan came up short. The solution: Lift the dancer’s stage name. “Golan would shout, ‘Look at Boogaloo dance electric!'” Chambers recalls. This was all despite the fact that someone had claimed this territory. In the late ’70s, a crew called the Electric Boogaloo Lockers twisted, necked, and locked on Soul Train. Chambers says he’s confident that Globus and Golan had never heard of them.

With a title and no script, Globus and Golan set out to make Electric Boogaloo in their traditional mode: quickly, modestly, and ridiculously. After hiring first-time screenwriters Julia Reichert and Jan Freya to write the script for Breakin’, only to trash it in favor of a new writer’s take, the Cannon Group recruited them to pen the Breakin’ 2 screenplay. Much like Globus and Golan, Reichert and Freya knew very little about breakdance culture. Reichert had written novels and dabbled in screenwriting. When the Breakin’ films were in development, Reichert ‘s childhood friend, culture critic Michael Ventura, was working on a book and companion documentary about John Cassavetes, who was shooting his final film for Cannon, Love Streams. When Globus and Golan needed writers for their breakdance project, Ventura suggested Reichert and his then-wife Jan, a performance artist and L.A. Weekly writer.

“Someone walked down the hall and said, ‘Anyone want to write a breakdance movie?’” Freya says. “Michael said, ‘I know someone.’” Because that’s how movies were made at Cannon Films.

To this day, neither Reichert nor Freya are sure why their original Breakin’ script was thrown out. But when Globus and Golan came back to them for Electric Boogaloo, they had newfound knowledge of breakdance stashed away. They had met the kids, they knew their lives, and they could fill in any blanks with movie tropes.

Electric Boogaloo was the Frankie and Anette “Beach Party” movie — or a Step Up installment if you’re so inclined — of its day. Kelly (Lucinda Dickey), Ozone (Quinones), and Turbo (Chambers) return from Breakin’, this time with an actual plot: When an evil developer (Peter MacLean) plans to demolish the community recreation center, the breakdance crew must … breakdance to stop it. Whatever, it was fun.

If Reichert and Freya wrote the Breakin’ 2 they envisioned, it would not be synonymous with “blissfully silly sequel.” Both writers were frustrated by Globus and Golan’s demands to keep the movie G-rated. The kids they met in East L.A. didn’t say “darn,” “shucks,” or “what is this bologna?!” but they stuck to the plan. The producers were constantly suggesting new ideas — the film’s Romeo-and-Juliet plot being a major, late-in-the-game change — forcing the women to constantly rewrite. This allowed them to inject their own ambitious ideas into the movie, too. For every scene involving “foxy nurses” (a detail that had Freya questioning their rating motives), there was a set piece like Turbo dancing up from the floors to the walls to the ceiling, a pricey in-camera effect that still looks impressive:

A countdown clock amplified Breakin’ 2: Electric Boogaloo‘s fun-loving intentions into rickety wackiness. Globus and Golan hired Sam Firstenberg, an Israeli director who previously helmed Cannon’s Revenge of the Ninja and Ninja III: The Domination, to direct the sequel. Firstenberg didn’t know the first thing about breakdancing, either, but he could shoot action choreography and keep up with the Cannon pace. Getting Breakin’ 2 in the can was the easy part. It was when Breakin’ 2 turned into TriStar Pictures’ prized possession in the winter of 1984 that crafting a coherent film became problematic. Firstenberg says that when TriStar’s Supergirl went from the no. 1 movie in America to acknowledged and ignored dreck in the span of one November week, TriStar pushed Cannon to wrap Breakin’ 2 so the dance film could take the bomb’s place. Firstenberg’s lone editor turned into a team of eight and an army of sound editors, working 24 hours a day for two weeks. The director mixed sound, color corrected, and screened his cut for Globus and Golan simultaneously. Breakin’ 2: Electric Boogaloo, originally slated for 600 theaters, would now appear in 2,000 theaters nationwide over a holiday season, arriving less than a year after Breakin’.

Breakin’ 2: Electric Boogaloo performed modestly with $15 million, more than the astronomically expensive Supergirl. Perhaps more importantly, it reached kids across the country, who reveled in its weirdness. Kids caught Breakin’ 2 and carried it with them. Take actor and geek connoisseur Wil Wheaton, who was never the same after he soaked up Electric Boogaloo. “I saw Breakin’ in the movie theater when I was 9 or 10 years old,” he says, recalling his terrible dance skills but rabid obsession with early hip-hop. “When Breakin’ 2 came out, it landed on me at exactly the right time. In exactly the right way. It was so unapologetically what it was that the young version of me was able to embrace it and fall in love.”

Casual investigation points to a slice of ’90s teenage culture losing their minds over Electric Boogaloo and its strange, disconnected title. While spitballing with Wheaton, several factors emerged that could explain Electric Boogaloo‘s transformation into a pre-Internet joke: There’s the “two”/“boogaloo,” rhyme factor, the title’s inherent inscrutability,1 and its ability to encapsulate the film’s aimlessly unadulterated joy. As the actor puts it, dropping a Mad Libbian reference to Electric Boogaloo “presupposes the knowledge of the film. Not only are you saying something that’s funny, it was also like speaking in a code. You could issue a challenge phrase to see if you got the correct response back. That’s how you knew you were speaking with someone who knew what it was.”

Just as Isaac Newton and Gottfried Leibniz simultaneously discovered calculus while researching independently, [Enter Title Here]: Electric Boogaloo flowed into the Internet lexicon through various mentions lacking a common source. Wheaton distinctly recalls working on a short film with friends back in 2001 and turning Electric Boogaloo into a recurring subtitle game. Spurred by the experience, he published the phrase (slipping it to his sizable, Internet-using audience) in an October 2001 plug for his radio show. A month later, the band Five Iron Frenzy would release Five Iron Frenzy 2: Electric Boogaloo. Dig deep enough and one finds earlier representation. The 1998 Ain’t It Cool News story “Deliverance 2: Electric Banjo Boogaloo” tips its hat to the cult film.

The legacy of Breakin’ 2 lives on in both meme and cinematic forms. Wheaton still titles blog posts with Electric Boogaloo (“I’m so bad at titling things,” he admits). Chambers continues to appear, promote, and nurture a dance career exponentially broadened by the film. Freya runs into people at the grocery store who can quote the lines. And 19-year-olds playing @Midnight games on a Thursday night are tethered, through osmosis, to just another 1984 movie.

Hollywood Prospectus Podcast: The 2014 Wall of Fame, With Drake, Reese, Clive, and More (With Video)