Grantland E-mails: Why Is The Silence of the Lambs Not a Sequel? 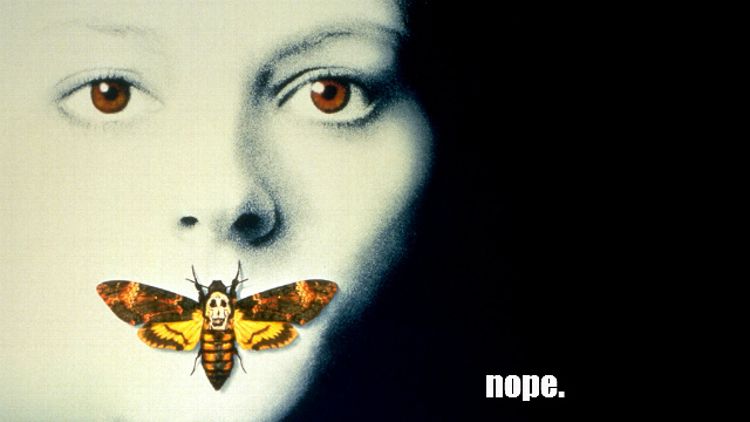 As we prepared this week’s Sequeltology bracket, the Grantland staff found itself debating one of the most important philosophical questions of the motion picture era: Is The Silence of the Lambs actually a sequel? After a lengthy exchange, and not a few angry post-debate shin-kickings, we settled on an answer. Sort of. For our purposes. Decide yourself; we’re nothing if not transparent, especially when we feel like we can get a post out of it. — Lisanti

Emily Yoshida: We’re fast-tracking a new bracket to finish off the summer, and the theme is movie sequels. Here are the potential candidates we discussed in our top secret meeting earlier today. Let us know if you’d like to add another title to the running. Though most of our titles are Part 2s, keep in mind any sequels are eligible, as are prequels. No Bond movies.

Also: The following list was dictated by the Sequeltology committee to one Mr. Simmons, who conveniently forgot to write down our Lord of the Rings suggestions, so it is very likely that there are other omissions as well:

Juliet Litman: Step Up 2: The Streets

Bryan Curtis: Khan is crucial to this bracket.

Also, The Jewel of the Nile.

Bartholomew: Sorry to double up so quick: Short Circuit 2.

Yoshida: OMG WE DEFINITELY SAID THIS ONE. I am so embarrassed that anyone would think I would leave this off even for a second.

David Jacoby: I would like to nominate Robert Mays 2.0.

Although I did enjoy the original Robert Mays, who wore the same jeans, hoodie, and Bears cap every day.

Robert Mays: It was two days. And I am not ashamed.

And I promise not to send any more.

The Silence of the Lambs

THIS IS WHY YOU INCLUDE SILVER ON AN E-MAIL CHAIN, LADIES AND GENTLEMEN.

Bill Simmons: Wasn’t Silence of the Lambs technically a prequel to Manhunter? I used to know things like this.

Fierman: The opposite. Manhunter came first in the mythology. (Based on Red Dragon, the first Lecter book, which He Who Shall Not Be Named — AHEM, RATNER — ruined.)

Unpopular Opinion Alert: Brian Cox might have been a better Lecter. He was great.

Simmons: Then that definitely counts. Feels weird, though. I loved Manhunter, and I loved Lambs, but I don’t feel like they were connected in any way.

Lisanti: BUT: It’s not really a sequel, is it? I think you need more continuity than that.

Rembert Browne: Not to be a one-trick pony or anything, but I take the exclusion of Mighty Ducks 2 as a personal attack.

Chuck Klosterman: “BUT: It’s not really a sequel, is it? I think you need more continuity than that.”

I am forced to agree. The relationship between the original and the sequel can’t just be source-based. There needs to be some connecting fluid beyond the original text.

Lisanti: “I am forced to agree. The relationship between the original and the sequel can’t just be source based. There needs to be some connecting fluid beyond the original text.”

Molly Lambert: So no Under the Cherry Moon, then?

Kang: So Wayne’s World 2 is out, then, because Tia Carrere has left the building?

Simmons: I’m glad Carolla isn’t on this chain because he would be asking Chuck for a sequel ruling on Taboo 2.

Silver: By that rationale you’ll have to remove Batman Forever from the original list, as it has no narrative tie to the previous films, and the only actor holdovers were the guys playing Alfred and Commissioner Gordon. So if you want to list a Schumacher Batman, you’d have to list Batman and Robin.

Bartholomew: You tend to think of a sequel as being part of the same franchise, and they usually have some continuity of directors/actors.

Silence of the Lambs and Manhunter are two separate adaptations of Thomas Harris novels that share some characters but don’t seem all that connected, otherwise.

The character Mike Hammer from Mickey Spillane crime novels was in several films noir like Kiss Me Deadly and I, the Jury back in the day, but people don’t really call them sequels.

That’s probably why we had a “debatable” qualifier on Silence of the Lambs. But there are so many exceptions and gray areas it might be better to just be really permissive and not too uptight about the criteria.

Klosterman: The movies don’t have to be *identical.* But is there any relationship whatsoever between Manhunter and Silence besides the original books? Is there even one actor who’s in both? Are they produced by the same people? Does the second film make any reference to the previous film?

Browne: So, according to this Klosterman ruling, Dirty Dancing: Havana Nights = not a sequel?

Asking for a friend.

Lisanti: I can’t remember how my own rules work: Would Emmanuelle in Space qualify? I’m willing to write them in any way that makes it eligible.

Kang: Is Mallrats a sequel to Clerks because Silent Bob and Jay are in both movies and they both take place in the same setting? Did my cat just fart? (Yes.)

Klosterman: Dirty Dancing: Havana Nights: Not a sequel. It’s using the same reality, but not continuing the narrative.

Lisanti: Mallrats is the sideways-universe Clerks. I just checked the View Askew boards; they say this is a valid reading.

Klosterman: “Is Mallrats a sequel to Clerks because Silent Jay and Bob are in both movies and they both take place in the same setting?”

Mallrats is part of a New Jersey trilogy, but the fact that the main character in the first film plays a different character in the second film indicates a lack of narrative continuity. It’s basically an alternative reality within the context of the preexisting Kevin Smith world.

Lambert: What do we call things that take place in a similar universe but are not sequels? And where do we fall on Leonard Part 6?

Fierman: I agree it’s weird, but there are multiple shared characters and contexts between the two movies (FBI profiling units, etc.), the books are a “trilogy,” and they both feature one of the greatest movie villains ever.

There’s a case to be made, is all I’m saying.

Lisanti: “And they both feature one of the greatest movie villains ever.”

By this logic, The Dark Knight is a sequel to Tim Burton’s Batman.

Simmons: When this entire e-mail chain is done obviously it’s a post.

Kang: WHAT IS YOUR SOURCE, LAMBERT?!?!

Chuck and Lisanti, what are your rulings on Clear and Present Danger?

Lambert: The Wikipedia entry on “sequel.”

Lisanti: I think we could technically disqualify the Jack Ryan movies under the “No Bond Movies” rule.

Simmons: In all seriousness: Wayne’s World 2 needs to be added to the list. It’s a strong 15-seed, I’m excited for it to give Aliens 2 a huge scare before Garth Algar throws the game away late.

Mays: The Naked Indian goes off for 50 in that game.

Klosterman: Here is a good rule: If you can watch a movie with 100 percent understanding of the plot and characters *without even knowing (or suspecting) that a previous film exists,* it’s not really a sequel.

Tess Lynch: Concerned that everyone is forgetting Cocoon: The Return.

Lambert: I I nominate Weekend at Bernie’s II

Kang: MOLLY, ARE YOU CLICKING THROUGH THE SAME EW.COM SLIDESHOW AS ME?

Lisanti: “A sequel follows directly from its obvious antecedent film, and holds in common multiple essential elements such as its main characters, director, lead actors, or whatever else the fuck makes logical sense.”

— from the Wikipedia entry for “The Sequel Pornography Rule: You Know It When You See It.”

Lisanti: Can’t decide if I like Die Hard: With a Vengeance or Live Free or Die Hard more.

Andy Greenwald: This isn’t a really question, is it? Die Hard: With a Vengeance! Jeremy Irons with frosted tips! Larry Bryggman’s mustache!

Greenwald: Amos, we speak the same language. That language is “English with a light German accent.”

Alex Pappademas: Late shift, somebody else may have already mentioned some of these, but here’s my top 12. All these movies are BETTER than the first one, I think — only one I can’t call is Temple of Doom/Raider.

Before Sunset
A Shot in the Dark (second, superior Pink Panther movie– Clouseau’s in it more)
Evil Dead 2
Kill Bill 2
Wrath of the Titans
Superman II
For a Few Dollars More
Jeepers Creepers
Crank: High Voltage
Does Friday the 13th 2 get to be in this conversation just for being the first one with Jason in it?

Simmons: Friday the 13th 2 and the one with little Corey Feldman are both watchable as hell. We might have to do a 64-movie bracket.

Cho: Let’s not get crazy.

Lisanti: The Conference Room Selection Committee Cockfight is our round of 64.

Klosterman: One small issue w/ this bracket, though: The Godfather: Part II is arguably the best American movie of all time (and certainly among the top 10). Isn’t this bracket a little too “UCLA in ’73”? It seems like it’s over before it even starts.

Fierman: Right. But you’re opening it to America, and a broad sample of America that skews very young. Godfather II is almost three decades old. I will bet you anything (and this hurts me to say) that Dark Knight wins.

Cho: Bracket is determined by fan voting on Facebook. I think Dark Knight will definitely win with that audience.

Klosterman: We should devise a short 10-question test (and you can’t access the Facebook ballot unless you get seven of the questions correct).

Yoshida: Will McAvoy wouldn’t care about this bracket b/c there was never a Rudy 2.