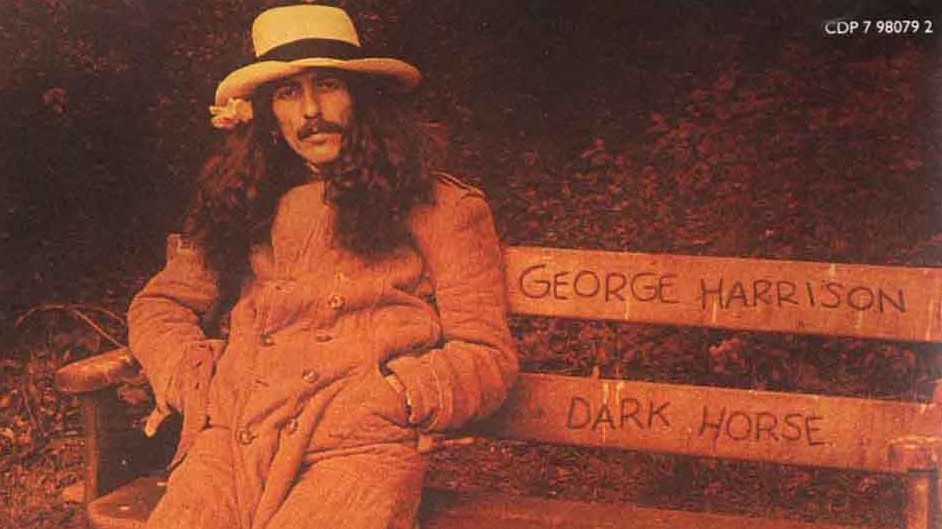 The new boxed set The Apple Years collects the first six solo George Harrison albums, which is five more than I was familiar with going in. Like most people weaned on the Beatles during their teenage years, I knew and loved Harrison’s third LP, 1970’s triple-album opus All Things Must Pass, generally considered (with John Lennon’s Plastic Ono Band and Paul McCartney’s Ram) to rank among the very best of the Beatle solo records. What I didn’t know of Harrison’s early solo work was the instrumental record (1968’s Wonderwall Music), the other instrumental record (1969’s Electronic Sound), the one that sounds like an unofficial sequel to All Things Must Pass (1973’s Living in the Material World), the debauched record (1974’s Dark Horse), and the one that looks like a flattened basketball (1975’s Extra Texture). Frankly, I had avoided Harrison’s solo albums because I heard they weren’t any good. At times, Apple Years doesn’t exactly dispel that notion, though “bad” rarely means “uninteresting.”

Being a Beatles fan in 2014 doesn’t offer much in the way of adventure; the band’s story has been told and retold many times, and the rote romanticism has rubbed away some of the richness of the individual characters. In the case of Harrison, his persona as a soft-spoken and dryly witty mystic has been well-established by handsomely produced hagiographies like the 2011 Martin Scorsese–directed Living in the Material World. While my appetite for Beatles ephemera is considerable — I’ve watched Living in the Material World so many times I can recite the “George hands Tom Petty a ukulele out of his car trunk full of ukuleles” story from memory — the process of turning Harrison into a sainted humanitarian has stripped him of his humanity. What I appreciate most about The Apple Years is how it restores several obscured chapters of the story, showing Harrison to be weirder, angrier, grumpier, and darker than his carefully stage-managed posthumous image might indicate. For better or worse, Harrison put his life into the songs. Fortysome-odd years later, it’s the songs that seem to provide the most complete picture of the man.

With the exception of Extra Texture, which is a pretty dreary exercise in broken spiritualism and sub–Gerry Rafferty sax solos, The Apple Years abounds with fascinating surprises. The album I’ve been drawn to the most is Dark Horse, long one of the most reviled releases in Harrison’s catalogue. Finished in a rush as Harrison was rehearsing for his blockbuster ’74 tour — the first by a Beatle since the breakup, and Harrison’s last ever in the U.S. — Dark Horse is remembered for the hoarseness of Harrison’s vocals, which were obliterated from round-the-clock jamming and drugging. (Cocaine, as it was for most of his peers at the time, was Harrison’s bugaboo.) I’m tempted to call Harrison a method vocalist on Dark Horse — the songs document the hell of Harrison’s life at the time, which was marred by his failed marriage to Pattie Boyd (who absconded with Harrison’s pal Eric Clapton in July ’74), his drug use, and his constant womanizing. In the press, Harrison likened the record to Peyton Place. His haggard voice suits the haggard tunes.

This carried over to the tour, when Harrison deigned to perform just eight of his songs over the course of a two-and-a-half-hour show, which allowed Ravi Shankar to play two sets of sitar music and frequent collaborator Billy Preston to essentially assume frontman duties. When Harrison did play his Beatles and solo hits, he altered the music and changed the words, rare for superstars at the time. (Even Bob Dylan, back on the road earlier in the year for an arena tour with the Band, played it relatively straight, performing his hits merely faster and louder.)

The response from the press was venomous; even normally worshipful outlets like Rolling Stone eviscerated both the tour and the album. This part of Harrison’s career, tellingly, is glossed over in documentaries like Living in the Material World, though in this clip you can see him shouting his way through an unfortunate reggae redux of “What Is Life.” Harrison looks gaunt, a tiny man staring down a leviathan-size audience and fighting to keep his nerve from failing.

How miserable was George Harrison around the time of Dark Horse? Let’s find out via this multiple-choice quiz!

1. Heading into Dark Horse, Harrison was coming off two no. 1 albums and his ego was raging. Which of the following statements did Harrison not make in the press at the time?

A. “Having played with other musicians, I don’t even think the Beatles were that good.”

B. “Paul should have let me write more, but he never forgave me for putting ‘Within You Without You’ on Pepper.”

D. “I really didn’t want to do this for a living. I’ve always wanted to be a lumberjack.”

2. Harrison produced Dark Horse by himself after enlisting the help of Phil Spector on All Things Must Pass and Living in the Material World. One of Harrison’s points of contention with Spector concerned the legendary producer’s excessive drinking in the studio. Approximately how many cherry brandies did Spector require in order to begin work each day?

3. The best song on Dark Horse is “So Sad,” which is also the album’s most direct statement on the dissolution of Harrison’s marriage. Harrison was so distraught over Pattie leaving him that he comforted himself by having sex with the wife of one of his ex-Beatle bandmates. Which Beatle was it?

D. None of the above. George Harrison would never sleep with the wife of one of his ex-Beatle bandmates.

4. Harrison cowrote another standout track, “Far East Man,” with Ron Wood of Faces and later the Rolling Stones. (Wood also included “Far East Man” on his first solo LP, I’ve Got My Own Album to Do.) “Far East Man” is about the value of friendship, though Harrison and Wood weren’t good friends to each other at the time. How did Harrison and/or Wood damage the relationship?

A. Wood slept with Harrison’s wife.

B. Harrison slept with Wood’s wife.

C. Wood and Harrison slept with each others’ wives.

D. Neither man slept with the other man’s wife, which upset both men, because they secretly wanted to swap wives but couldn’t figure out the logistics.

5. In spite of the tension, Wood plays guitar on the Dark Horse cut “Ding Dong, Ding Dong.” How did Harrison credit Wood in the liner notes?

A. Ron Would If You Let Him

B. Ron Would Pick Up the Phone If Keith Richards Doesn’t

C. Ron Would Suck Up to Rod Stewart Relentlessly

D. Ron Would Resemble a Rooster If He Had Red Hair

6. One of the weirdest cuts on Dark Horse is the cover of the Everly Brothers’ “Bye Bye Love,” which Harrison rewrote to include a reference to his wife running off with Eric Clapton. What is Harrison’s nickname for Clapton in this song?

7. In his memoir Clapton: The Autobiography, Clapton writes that “heroin began to come into my life” in 1970 when he was hanging out in the studio with Harrison during the making of All Things Must Pass. How exactly did heroin come into Eric Clapton’s life?

A. “A particular dealer used to come around whose deal was that you could buy as much coke as you wanted on the condition that you took a certain amount of smack at the same time.”

B. “Bobby Keys, a lovely Texan, would stay with me and do blow at my flat from the time the session ended until 6 or 7 a.m. in the morning. We were so gakked one night that when he slipped in some heroin I scarcely noticed until I felt God run his index finger across my back.”

C. “George wanted me to play on ‘Thanks for the Pepperoni’ and the thought of doing anything else frankly seemed attractive.”

D. “My world was crumbling: I was in love with my best friend’s wife, and now that Duane Allman was playing in Derek and the Dominos, I was suddenly the second-best guitarist in my own band.”

8. Clapton also writes in his book about how Harrison wanted Clapton to seduce his wife, Pattie, so that Harrison could then attempt to seduce Pattie’s sister, Paula. (Clapton instead went after Paula in order to get closer to Pattie.) How old was Paula when this occurred?

9. Of the many fine sidemen who played on Harrison’s early ’70s albums, perhaps the best was drummer Jim Gordon, whose playing can be heard on everything from Pet Sounds to Harry Nilsson’s “Jump Into the Fire” to Frank Zappa’s Apostrophe to the Incredible Bongo Band’s “Apache,” one of the sampled breaks in hip-hop. Why did Gordon’s music career end in 1983?

A. He died of a drug overdose.

B. He became a born-again Christian.

C. He started a computer company and became a millionaire.

D. He murdered his mother.

10. Harrison’s ’74 tour was controversial for how Harrison changed up Beatles songs. Which of the following lyric changes were not made by Harrison on the tour?

This article has been updated with the correct answer to question no. 7.