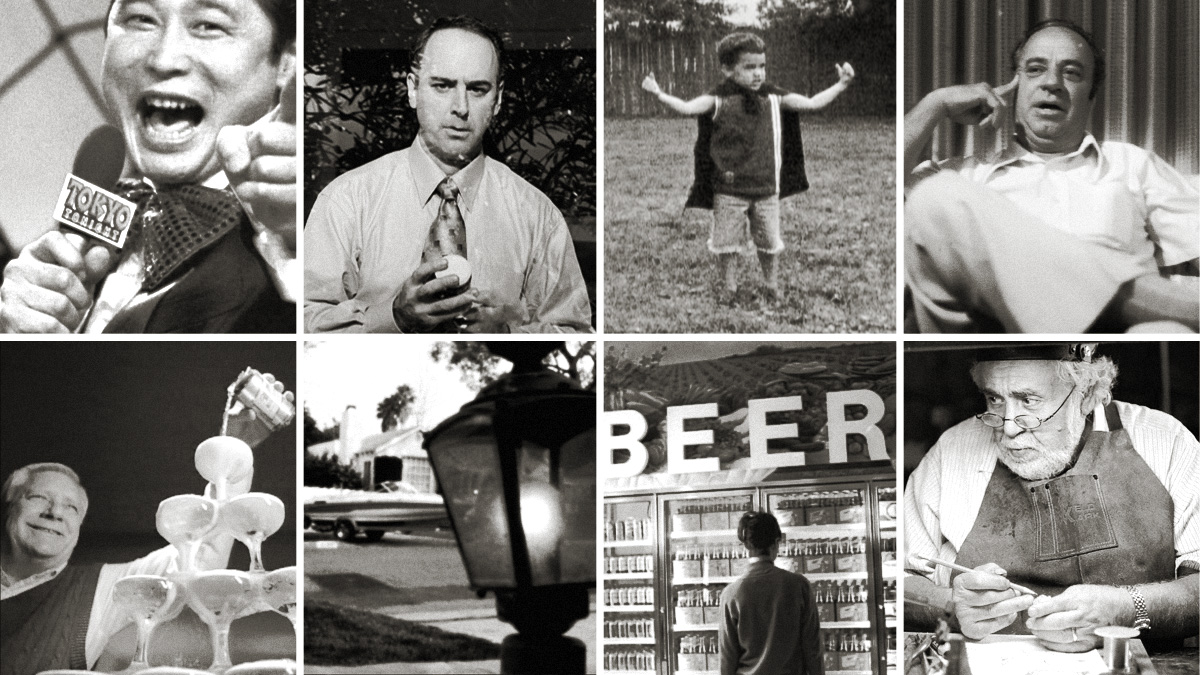 Marrakech, 2001 or 2002, maybe, and Errol Morris wants camels. Real, spontaneous camels — the kind you see wandering across the desert in children’s books. In his documentaries, Morris is known for staging and re-creation, for artifice. But in this case, he’s shooting an ad, and in his ads, he has the paradoxical yen for something, well, something real.

The ad is for the networking company Cisco, which has flown Morris and a team of about 20 people around the world in what art director Steve Hardie describes as “a big fucking jet” occasionally used by the Rolling Stones to tour. Being an art director, Hardie is more familiar with building worlds than capturing them, but he has gotten used to Morris’s rhythms and proclivities by now — his “hunter-gatherer” spirit, his “slight dysfunction,” his preference to shoot first and build a storyboard later, like a map drawn on the way to a place you didn’t initially know you were going. “Look at these caterpillars,” Hardie says, echoing Morris, remembering the vision they came upon in a Chinese silk factory. “Look at these little caterpillars doing their thing.” It was too good to pass up, so Hardie stuck a Cisco router on the wall and they got to work.

As for the camels, the crew ended up staging them. They looked great, Hardie says, walking through the desert with their Bedouin tribesman, but they didn’t make the cut. Hardie has worked with Morris for about 12 years, starting with The Fog of War, jumping the line between commercials and documentaries, jobs of “freedom and responsibility.” Of Morris’s style, he says, “If you prepare, you only get the things you prepare for.” Of the camels: “I wish I had pictures.”

By his own estimation, Morris has directed more than 1,000 ads. Laid end to end, these would cover the length of another movie, maybe three. “American haiku,” he calls them — microcosmic bursts of narrative that reflect how we live instead of explaining it, suggesting bigger stories without taking the time to retell them. Years from now, more highly evolved forms of life could watch Morris’s Citibank ads and understand that ours was a culture that worried it worried too much about money, or watch the Cisco ads and understand the psychedelic overwhelm of what we used to call “globalization.” As ads, they’re good because you don’t know exactly what they’re for, and they seem to unfold for far longer than the 30 or 60 seconds they’re actually onscreen, the way ink blots slowly across a napkin.

We’re celebrating the release of Morris’s It’s Not Crazy, It’s Sport series of short films all week.
Like his documentaries, Morris’s ads run on tiny parts: the image, the line, the glancing blow that leaves a mark. Jeff Kling, a copywriter at Wieden+Kennedy in the late 1990s and now chief creative officer at Fallon Worldwide, remembers a moment in Morris’s Fast, Cheap & Out of Control that geeked him so profoundly he can still replay it in his head 20 years later, of a topiary gardener pruning a hedge. “So he’s pruning,” Kling says, “and within the natural rhythm of moving his shears, he lets go with his right hand and sweeps the bee out of his way.” In the sweep, Kling saw the man’s life unfold: a life among plants and insects; a steady attunement that took decades to achieve and only a passing gesture to express; footage from inside the wheelhouse, the sanctified zone.

At the time, Kling and his colleagues were casting around for a director to shoot a campaign for Miller High Life about capturing what Kling calls “this fading world of the high life in American manhood … of its last few shining examples before disappearing forever into a sea of yogurt and cappuccino.” Morris and Kling had a good, long, excited phone call, most of which seemed to consist of them taking turns flipping out over this topiary gardener. Kling knew that Morris got it, in the cosmic sense. Twenty years later, his enthusiasm remains hot. “It’s unbelievable!” he says. “How long [the gardener] had to ply his trade! His craft! His expertise!” Right: Look at those little caterpillars.

The High Life ads are probably Morris’s most famous, or at least most beloved. “I don’t shave my chest, I don’t tan, I don’t fix my hair, I could care less about the latest fashion trends,” says YouTube user juufa72, commenting on a spot of a man making deviled eggs. “I work hard, I love my family, and I love a cold beer.” Target hit.1 More poignant are the words of jimbell15, on a spot lamenting the conflation of “trucks” and “SUVs”: “Love it I’m 40 so remember what a real truck is.” Nostalgia, mourning, a defiant stance in the name of authenticity, all in one unpunctuated string. And old people might say that 40 isn’t even old enough to know what you’ve lost.

As with the Cisco campaign, Morris sought some measure of reality, casting actors who were also plumbers or cooks, people who knew how to handle monkey wrenches or repair solenoid valves. Kling remembers the strange wave of recognition that washed over them when Morris directed them to hold their tools less like actors and more like mechanics — aha. And then there was the food: burgers with a glacier of butter on top, plate specials that come out looking like a vague pile of yellow. Things came to a head over turkey. “We had to tell the stylists, ‘Don’t blowtorch it with a bunch of bitters on its skin,’” Kling says. “‘Just roast the fucking turkey.’”

No writing on the ads of Errol Morris would be sufficient without mentioning a young woman named Ellen Feiss, who arrived on the set of an Apple shoot as a friend of Morris’s son, Hamilton, and ended up in a spot that made her a lowercase kind of celebrity. “Switch,” the campaign was called, as in people switching from PCs to Macs. This was 2001, before the first iPod, before the brand cemented its personality, before Apple became the worldwide computer de rigueur. Feiss, 14, was laboring under the spell of some Benadryl, heavy-lidded and a little out of it, burritoed in a gray hoodie and telling the camera about the night she was working on a school paper and her PC conked out without having autosaved. “It’s kind of … a bummer.” It was in that ellipsis — a full three seconds in which Feiss stares lazily at the camera — that her fate was temporarily sealed: Nameless Teen Stoner Chick from the Internet, less a person than a totemic abstraction.2 In a Venn diagram of demographics too perfect to script, someone turned her into a Magic: The Gathering card.

The most interesting about the “Switch” ads is how Morris recycled them a few years later for MoveOn.org, replacing PC owners with people who had voted for George W. Bush during his first presidential run. As a documentarian, Morris is a great and subtle appropriator, someone who has lifted the visual deadpan of cop shows to tell stories of true crime and the zazzle of reality TV to present scandal. You see two tin cans and a piece of string; he sees a telephone. Suddenly, a consumer’s dilemma — Product A failed me; I’m ready to try rival Product B — becomes an analogue for the voting process. This is Morris, speaking our language: If more people thought voting was as simple as buying shampoo, more people would probably vote.

My personal favorites are the ads Morris directed for Levi’s in the late 1990s. At the time, the brand was having a familiar crisis: It had lost touch with youth. Rob Smiley, a creative director on the project, says the goal became to convey the idea that Levi’s wasn’t the only choice out there, but it was the oldest, the first, the most authentic. Or, as Smiley puts it, “‘What’s true,’ both as a question and a statement.”

Kids were brought in, some of them Levi’s wearers in the wild, others just familiar with what Levi’s were.3 Morris had no plan other than to talk about life. Some of the kids pontificate, others confess, others do that sociable dance, telling stories, turning on their charm. One plays the clarinet and juggles; another says his father still doesn’t know that he’s gay, then looks away from the camera bittersweetly and laughs.

The artifice here is the streetscapes behind them, which were mapped onto green-screen interview footage later, allowing Morris to preserve the intimacy of a closed set while giving the impression of the open world. Watched in sequence, the ads take on a shape, like Richard Linklater’s Slacker or Waking Life: random people telling us random things whose meaning only accrues over time, the way distant stars come together in constellation.

“The really interesting thing about the campaign was that the biggest impact was with parents,” Smiley says. “They were shocked that a brand like Levi’s would broadcast things about homosexuality or skipping school or one-night stands. Kids, on the other hand, didn’t notice because it was their day-to-day life.”