Chernobyl Diaries and Meta-Horror: What Happens When Watching the Watchers Is More Boring Than Scary? 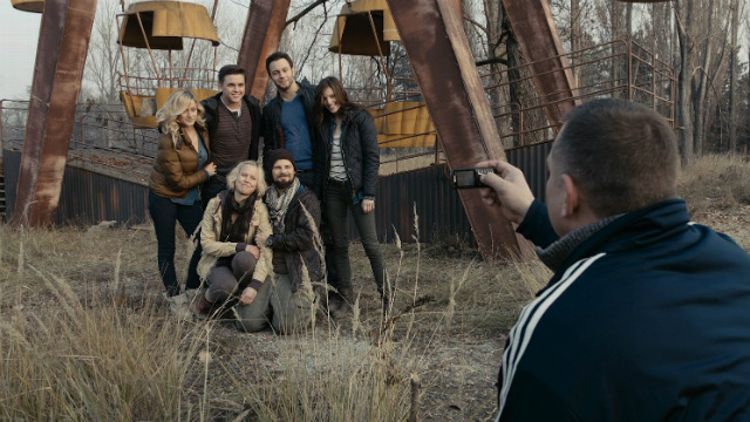 What’s scarier about living in a time of constant surveillance: being watched, or being caught watching?

Paranormal Activity genuinely scared the shit out of me in 2009. Like The Blair Witch Project that preceded it by a decade, it was almost as scary to think about what it was like to film the movie as it was to watch it. Low-budget productions often involve a group of professionals who have no reason to trust each other, and imagining showing up for an early-morning call in the woods is chilling enough for anyone who’s ever downloaded a script in PDF and wondered what they’d gotten themselves into. Paranormal Activity’s release came at a time when we were getting increasingly paranoid about how we shared our information, however, and this made it even more scary than it would have been before we knew that The Government Knew What We Liked and were picking up the geographical pins that we had unwittingly dropped into their database.

Even now it seems as though we have no idea what our involvement with technology is doing to us, but we know that it could explode in our faces like a nuclear reactor site that would later become deserted, haunted by contaminated bears, clichés, and foolhardy tour guides (but more on Chernobyl Diaries later). Oren Peli’s film debut articulated our new anxieties and paranoia about our ability to watch ourselves — he showed us a living room haunted by surveillance cameras as much as it was haunted by an invisible evil poltergeist. Suddenly, seeing the documentation of your own life seemed suspenseful, even terrifying, the dark-chocolate-coated flip side of whatever whimsical vanilla wafer of weddings and births that it was intended to be. Acknowledging the power of information sharing (for good and for evil) and the futility of trying to change the outcome of events just by capturing them is as creepy as being stuck in a dark theater and listening to the echoes of your “DON’T OPEN THAT DOOR!” as you watch an actor stupidly open the goddamn door anyway. Fear is vulnerability and helplessness, whether it comes when faced with a monster or just some dopey webcam.

The premise of Chernobyl Diaries sounded so promising: a group of naïve adventurers in Eastern Europe make the astoundingly dumb decision to forgo a trip to Moscow in favor of a voyage to the abandoned disaster site where Uri Simpson dropped his last glowing radioactive rods. What compelled them to toss their middle fingers at TripAdvisor? It’s all too obvious: The votes were swayed by their Dumb Leader (the older brother, naturally, a guy whose character we were meant to question because he was the sort of fella who would steal sips of your coffee without asking) tempting them with the prospect of a really cool “photo shoot.” Everyone was armed with iPhones and DSLRs, and the Facebook album carrot’s implied dangle was meant to speak to the Foursquare generation’s urge to check in somewhere crazy-bizarre. (It would be so easy to become the mayor of Pripyat! Imagine the free mutant fish, the Grouponed Ukrainian goodies!) Unfortunately, this exploitable premise was largely neglected in favor of looooong scenes in which the characters gabbed in a stalled van, and (spoilers, I should ask for your thanks rather than your forgiveness here) swept off-screen to be gnawed at by German Shepherds pretending to be wolves. I’m not even going to get into the fact that the two lead actresses’ digital perms (because curling with a rod only lasts six hours, max, in those kinds of conditions) stand up to the skin-peeling air as though they had been set with liquid nitrogen and XXXtra Hold Aquanet, or that at one point (spoiling! Spoiled! You’re welcome!) blonde Natalie decides to iPhone-film her boyfriend Chris (McCartney) going into some sort of septic shock from the wound stemming from his half-digested leg, and then sweeps his hand away as he starts to propose and tells him to “WAIT! WAIT UNTIL WE GET TO MOSCOW!” Yep! Better preserve these Hallmark moments to share on your Timeline, the thumbs-ups are sure to flow like your spurned fiancé’s blood from his femoral artery!

Another theme only superficially exploited and explored was that of nature versus nuclear (“Listen! To the silence! Of the nature!” — paraphrased, I wasn’t taking notes because it was dark and I was oh-so-bored): Pripyat, once a thriving city (evidence: Ferris wheel for a May Day celebration that never happened; oh, I get it, May Day/m’aider!), is now empty, save for some flesh-hungry animals and a rotting fish that jumps when poked. I wanted so badly for the movie to nudge my brain into thinking about how I get most of my natural-disaster information from Twitter: how helplessly we watch, and try (often in vain) to help victims of earthquakes, tsunamis, and fires by knowing where to direct our funds, guided by the evolution of our feeds. There is no cell phone service in Pripyat, and the person on the other end of the walkie-talkie is usually churning in bits and pieces in the belly of some beast, so any attempts to connect in a modern way are thwarted by the site’s primordial off-the-gridness. That doesn’t stop anybody from trying, of course, like trying to find your friends in the cellular gridlock of Coachella. That futility is starkly spooky, and could have been used to hearken back to old-timey horror flicks in which the land line’s cord has been frizzled and there’s no way to dial 911, but instead it’s just accepted as another of the series of predictable bummers that makes this movie seem more like a can of sad than anything that speaks to current anxieties. I shrieked just once, when the real star of the film (a bear, stealing just one scene like a salmon from the snore-contaminated waters) somehow appeared on the upstairs floor of an apartment building into which Stupid Tour Guide had dragged his entourage. How the bear had silently ascended stairs, weighing like 300 pounds and with ursine clumsiness, is a mystery that can only be explained by the fact that radioactivity within the world of The Chernobyl Diaries means exhibiting side effects such as stealth, cannibalism, and nausea that drives you to the edge of vomiting, loudly but unproductively (and between groans of “My skin! My eyes!”).

Nature’s triumphs over technology are probably never more horribly evident than when you consider what happens when a nuclear reactor goes haywire, and the fact that the victims of this incident were portrayed as faceless tourist-eaters gives a questionable read on the sensitivity meter. When tourists — the physical embodiment of lurkers or watchers at a geographical remove from an event — become victims because they’ve been drawn too far into the contaminated zone by their own curiosity, we have to question our reactions to natural disasters: How much of our gawking at cities suddenly submerged underwater, or shaken to bits by a 7.2 on the Richter scale, is driven by a desire to help, and how much of it comes from a desire to be entertained? Not maliciously, of course. The train wreck has already happened, but now it requires more effort to look away than it does to inspect it.

Perhaps this is why Cabin in the Woods feels like a snow globe containing much better snowflakes than the single icy particle that is Chernobyl Diaries: a horror film that doesn’t try to hit some kind of new nerve is, almost always, the worst movie you’ll claim to have ever seen (until you forget and attend the next one, chauffeured by a lack of interest in Moonrise Kingdom). They don’t have to be meta to be relevant: Splatter and torture horror films dominated both the post-Vietnam and post-9/11 eras, providing an escape from graphic violence with … you know, fake graphic violence. Meta-horror, however, just doesn’t produce the same adrenaline-sweat palm puddles. It’s its own genre, more suspenseful than terrifying. It’s difficult to clutch the arm of your movie seat while at the same time tapping your finger against your chin and saying, “Hmmmm.” The degrees of remove are critical: It’s more thought-provoking to watch the watchers, the manipulative force turning the gears in Cabin in the Woods, but it’s downright scarier, somehow more primal, to just witness the found footage unfolding, as it did in each chapter of Paranormal Activity or the thalassophobic Open Water.

What helps us cope with the worst things we witness in real life (the Tumblr suicide letters, the police brutality, the worst news that floats to the top of the page) is the community of other people whose virtual proximity, in times of crisis, is almost palpable. What’s really scary is to be alone and terrified: If we now think we’re less psychologically alone than ever (swaddled in our networks), the definition of solitude might be shifting toward something unknown and unnamed. The laptop glowing at night might be becoming something like Carol Anne’s television set, a dimension we enter and forget how to get out of, no Tangina to tweak the connection. Could that signal a shift toward a resurgence of psychological scare flicks? Technology has changed our assessment of our own accountability, after all, bringing a new identity and collection of personal data for which we’re responsible, and all of those dark woods to get lost in late at night.

If horror movies are a boot camp in training ourselves to react to actual scary scenarios, what’s the next phase that follows the gore and torture porn of Saw and Turistas? If anything, Chernobyl Diaries‘ 25 percent Rotten Tomato rating seems to signify that we’ve moved past clubbing that same dead ghost horse: It was Turistas without the visual attack, a long and unstimulating glance at the aftermath. Maybe it was a fumble heralding a new era, a bad pass that had some technique in the spin of the human-flesh football. We’ve withdrawn many of our troops, and now we’re just anxiously watching ourselves staring at the blank wall, waiting for whatever chilling noise grabs our attention next. The silence is thick with the fact that there’s always something coming for us, or scratching at the floorboards, waiting to get out. We have a unique and new role now — we star in our own cinematically constructed lives, we can munch Junior Mints and watch footage of ourselves over the course of the past decade: Our dialogue is written on our Facebook walls, our car accidents and trips to the emergency room can be reenacted by scrolling through old tweets and texts, and (maybe scariest of all) we can watch ourselves hurtling toward our own conclusions, each profile picture’s wrinkle or liver spot foreshadowing our ultimate demise.

Our lives aren’t always horror movies, of course; in fact, they’re mostly stories about how we feel about Mad Men or a countdown of our favorite face-cleansing brushes. But there’s undeniable suspense because of how intently we’re training our collective eyes on it. The longer you search in vain for spark plugs in the Chernobyl parking lot, the more the inevitable sinks in to destroy your cells (and that, of course, overrides the bears and the wolves and the murderers — they weren’t even necessary, and, if anything, served to detract from what really should have been scaring us all along). As we figure out more about why and what we’re waiting to see, we’ll be better able to stuff those terrors in a blender and make a chilling milkshake to reflect what we’re really afraid of. If the thunder don’t get you, then the lightning will.

The New Prometheus Featurette: Enough Already, Time to Start Taunting Us With the Good Stuff