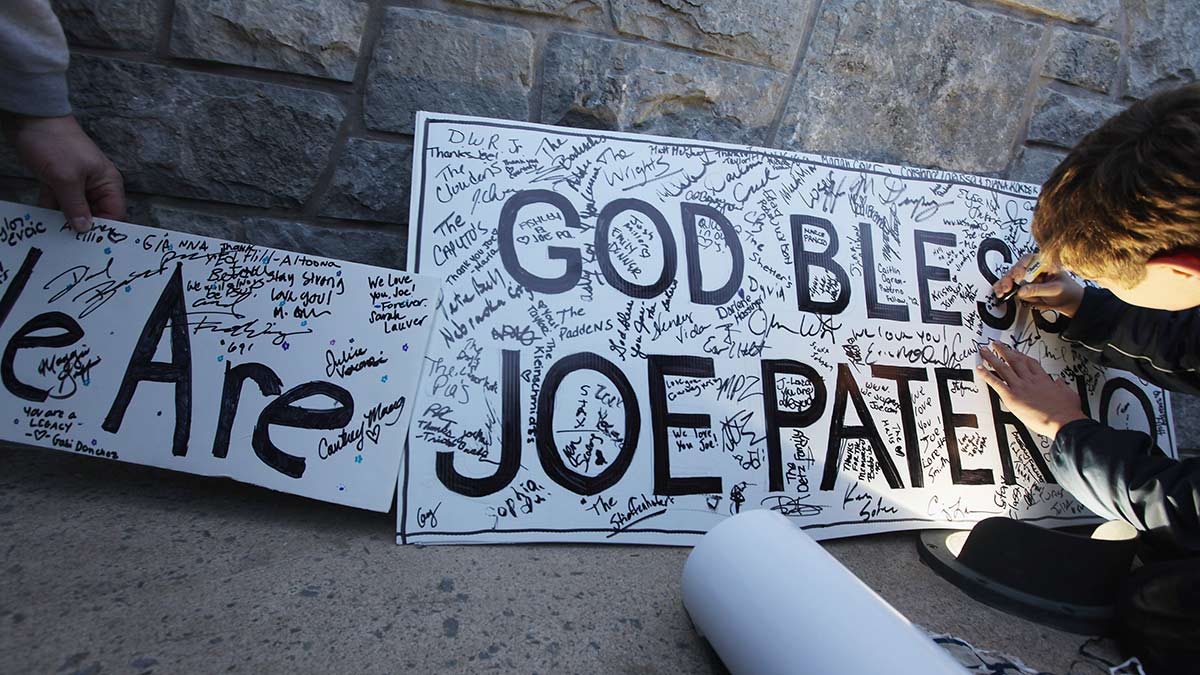 I went to State College last weekend, and my wife was concerned for my safety. I still have no idea how we got here, or if this is the nadir, or if my hometown will keep spiraling downward with each Shakespearean twist this tragedy generates. It’s been a little more than a week since the news broke, and it feels like it’s been months. We are now viewed from the outside world as an unseemly little place poisoned by misguided ethics and publicly sanctioned violence.

Safe? In State College? I spent my Friday nights in high school loitering at a defunct video arcade called Playland. The closest I ever came to danger at Penn State was during a fraternity initiation involving several pints of Mad Dog 20/20. I knew people who left their cars and their apartments unlocked for days at a time. In State College, we liked to think we looked after each other, and then we found out that some of the most prominent members of our community had failed to look after helpless children, and because of our lifelong emotional attachments we now feel like we are being branded as complicit in these crimes.

My mother told me a story shortly after I arrived in town on Friday night, and I think it explains as well as anything how jarring this is for a community that has never experienced such a complete and utter shock to its system. My mother’s friends — let us call them the X’s — are cordial with Graham Spanier, the university president who lost his job a few days before. So last week Mrs. X baked a coffee cake, got in her car, sweet-talked the security guard stationed in the Spaniers’ driveway, and dropped it off at the front door. It was not meant to condone anything Spanier had done; it was merely a way of acknowledging … well, honestly, I don’t know what the hell it was meant to acknowledge, and the X’s didn’t either, but it’s just something you do in small towns, isn’t it?

I went home last weekend, and there was no other topic of conversation. Another friend of my mother’s told her that it was like a death in the family that just keeps going and going. We spent the weekend contemplating ethics and morality and other philosophical quandaries that extend far beyond my pay grade; I did this in my own head and in conversations with students and journalists and professors, one of whom teaches a class in scientific ethics to university administrators. He couldn’t really get at it, either. My father made a confession: All those nights we thought he was driving back to his office to work during the summer, he was actually sneaking off to play nine holes of golf, and he often did so with Tim Curley, the athletic director who has since been charged with perjury by the grand jury. They got along well, as men on the golf course tend to do. He seemed an upright and intelligent man.

We keep asking ourselves if these were good and smart people who did a stupid thing, or if there was some insidious element to it, some attempt to preserve the needs of the university above the needs of abused children. And if this were the case, how is such a perversion even humanly possible? Did a young man really witness the rape of a child and do nothing to stop it? Is there another side to the story that we haven’t heard yet?

“Before I deployed to Afghanistan,” said a friend of mine, a Penn State alum, “I was convinced that the first time I got in a firefight I would be out in front of my men, leading them with bullets zinging around. Want to know what I did the first time the shit hit the fan? I jumped in a fricking ditch. Once I gathered myself, I was able to make the decisions that needed to be made, but the point is, I thought I knew what combat would be like and how I would react. Turns out I was wrong, and if I can’t even tell how I’ll react in certain situations, I certainly am not going to say how others should have reacted in situations requiring split-second decisions.”

On Friday night, the students held a candlelight vigil, and 10,000 of them showed up on the lawn in front of the administration building, and I heard somebody say, “This is the Penn State that I know,” but I’m not sure if anyone from the outside world believed this was much more than an empty attempt at achieving penance after the riots of last Wednesday night. On Saturday, Penn State and Nebraska played a football game that didn’t matter at all, and even when we attempted to cheer there was an underlying veil of silence. During the game they showed several videos of key moments in Penn State football history from which Paterno had been carefully excised. People kept chanting his name at inopportune times; it felt like they were running their tongues over an extracted tooth.

I know you have seen people on television who so sympathize with Joe Paterno that they have been blinded as to the bottom line. If I wanted to, I could take you outside a church on College Avenue, where I saw a woman carrying a stand-up cardboard cutout of Joe Paterno under her arm; or I could take you down the block, outside a place called the Student Book Store, where they were holding a sidewalk sale, and where a little girl pointed out a framed photograph of late-period Paterno squinting as if in search of a crosstown bus. “You like that one?” the mother said, and then she bought it, and maybe I could have asked her what she was thinking, but I knew exactly what she was thinking.

All I can say by way of explanation is that there are people here who will cling to iconography because this is what they’ve always done. “For my generation, for the group of kids I’ve been in school with since I was 18, we grew up with Joe Paterno as being almost like a grandfather figure,” says Jon Tecce, the president of Paternoville, the spot near the statue of Joe Paterno where students camp out for prime seats at home games. “In a sense, he means more in an overseeing role. I’ve camped out my entire career, and he’s come here once. Joe’s absence is more symbolic for me. I’m just used to seeing him on the sidelines.”

To be honest, I am so accustomed to people wholeheartedly buying into the mythology that until last weekend I stopped noticing the pictures in store windows and the bins of bendable JoePa dolls and the JoePa coffee mugs and the endless tchotchkes that drive the economy of this place. I believed, and continue to believe, that people are more than cardboard, and because of that, I do not believe Paterno deserves our sympathy right now, and, in fact, I walked around State College this weekend supremely pissed off that he did not live up to the standards he’d like us to believe he set for himself. I do believe that we should allow time for more facts to emerge, but I don’t believe, at this point, that he deserved a proper farewell, and I was not alone in that sentiment. And yet when I saw those televised shots of his house on McKee Street, something caught in my throat, a conditioned response to a man I’ve been raised to believe was the moral arbiter of our community.

All I can say by way of explanation is that there are people here who will cling to iconography because this is what they’ve always done.

That’s what I think is happening here: It’s not that we are condoning child rape, and it’s not that we don’t recognize our obligation to the victims above all else. It’s that we are condemning all that Jerry Sandusky is accused of and trying to make it right while also dealing with this involuntary response to the death throes of a way of life.

“You have to live in the middle of this contradiction,” a Penn State sociology professor, Sam Richards, told a class that Lori Shontz of the Penn Stater magazine sat in on. “You have to live in this zone where both [situations] can be true, and it’s very, very, very difficult. But part of becoming a thinker is to sit with two contradictory thoughts in your head and see them both as being true. And not go crazy. And not immediately try to resolve them. And so we’re offering that to you. Sit with that. Because this is big. That’s big.”

I would like to tell you that it has always disturbed me when we erect monuments to anyone, let alone those who are still alive. But it’s easy for me to say that now.

I walked with my parents to a football game on Saturday morning. There is a ritual to the walk that I’d never really processed up until now, and the night before, while talking with another reporter who turned to me in an attempt to explain the actions of the men who had failed us all, I’d come to realize that the walk has always been as meaningful as the game itself.

This is how it goes: On Friday night, my father instructs me several times where exactly I should park, and in the morning we convene at his office on campus, and we drape ourselves in layers of clothing apropos to the weather, and then as a family we kvetch and bicker all the way across campus, as we trudge behind the auditorium named after Dwight Eisenhower’s brother and past the outdoor swimming pool and the athletic fields where the chicken coops used to be, until Penn State bowed to the inevitable forces of progress and the chicken coops were razed and athletic fields were built in their place. We pass underneath a stand of trees and through a parking lot until we funnel onto Curtin Road, and this is where it opens up and all paths merge into one. When I dragged my wife up here for the first time, she emerged onto Curtin Road and saw the enormous Erector Set we call a stadium and the scalpers with fingers raised and the Winnebagos lined up for miles around, and she could hardly believe how big it all was.

I have no idea if that is something I should be proud of, or if it is just another warning sign that we ignored, just as I have no idea if it was right or wrong to play a game on Saturday. All I know is that it felt good to make that walk. The people who think the need for football in State College is entirely about football did not grow up in a place like this, where the community happens to congregate outside a stadium to mark the time and to mourn and to express sympathies and sorrows and regrets we might not otherwise be able to put into words. I know people who have been coming to this stadium for years and have never gone inside. It is just something we do, and if it’s the wrong thing, if it needs be pulled back or dropped to Division III or halted altogether for a year or two in order to achieve some measure of justice and perspective, then we will adjust. There are so many questions, and so few satisfactory answers. It feels like we are walking in place.