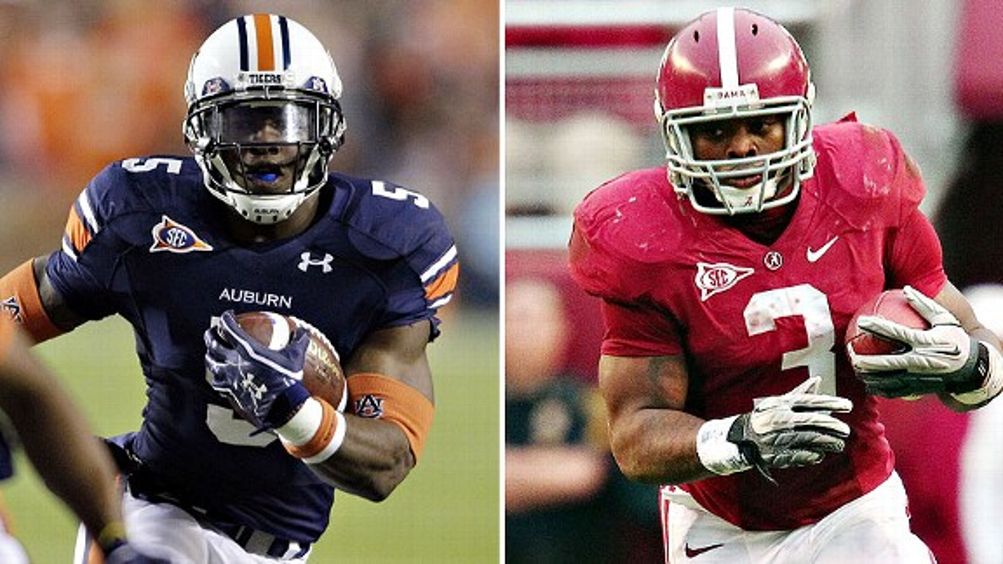 Editor’s note: For Rivalry Week, we invited the sports editors of several college newspapers to compete in a friendly write-off. To vote on who won, visit our Facebook page.

For Crimson Tide fans, the 2010 Iron Bowl was not your typical feud. As anyone in the state knows, an Iron Bowl victory can make up for disappointments experienced earlier in the season. For Alabama, Friday, November 26, 2010, meant an opportunity to right the wrongs of earlier losses to South Carolina and LSU — to end an otherwise disappointing season with a victory against our hated rivals. It was a bowl game, and a much bigger one than any the Tide would play come January. But more than anything, it was a chance to spoil what Auburn had worked so hard to build. It was a chance to vanquish the villain that Cam Newton had become.

A year later, Alabama fans and players alike remember being up 24-7 at the half. And they also remember what it felt like watching Newton blow kisses to the student section after Auburn’s miraculous 28-27 comeback win. They remember the empty feeling of leaving Bryant-Denny Stadium without a win for the first time in 20 games. In Tuscaloosa, elephants never forget. On November 26, 2011, they will make sure that Auburn remembers the beating it will take at the hands of the Tide.

Auburn doesn’t stand a chance. Not simply because Alabama has more talent, but because the Crimson Tide are set to take back what they feel rightfully belongs to them — the state of Alabama. A portion of the Tide’s 2009 glory was stolen (or bought, depending on whom you ask) last year. Now the Tide will prove why they own the state. Last year, Cam Newton picked apart a young and inexperienced Alabama secondary as he connected on three touchdown passes, including a 70-yard bomb to wide receiver Terrell Zachery.

Newton is gone, and the Tigers will face a tremendously improved group of defensive backs. NFL pro scouts all have their eyes on the quartet of Dre Kirkpatrick, DeQuan Menzie, Mark Barron, and Robert Lester. Meanwhile, the Tigers figure to march out Clint Moseley at quarterback, who didn’t even come into the season as the starter.

The running game won’t fare much better. With brick wall Josh Chapman up front and the most talented linebacking core in the country, Alabama will quell any threat the Tigers might pose on the ground.

But where Alabama will truly separate itself is on the offensive side of the ball. Trent Richardson and the Alabama offense will prove too much to handle for the Auburn defense, which has been shredded this season like a wet paper sack. Auburn’s young defense is ranked no. 72 nationally in points allowed, which doesn’t bode well for trying to stop a future first-round pick and legit Heisman contender.

Auburn does have one bullish defender in Eltoro Freeman. For you non-Spanish majors, Eltoro literally translates to “the bull,” an appropriate name for a cow-school linebacker. Unfortunately for him, the only red Freeman will be seeing during the 2011 Iron Bowl will be no. 3 in Crimson charging toward him. Richardson is first among SEC running backs in yards and touchdowns. The running back’s physical style has worn down opposing defenses all season, allowing Alabama to dominate the second half in nearly every game. With Auburn’s defense giving up 198 yards per game on the ground, Richardson likely won’t have to play much in the second half anyway.

Quarterback AJ McCarron had a rough go of it during the Tide’s game against LSU, going 16-for-28 for 199 yards and throwing a costly interception. This next round of Tigers presents McCarron with a totally different scenario. Auburn ranks no. 48 in the nation in passing yards allowed per game. Look for McCarron to take advantage of eight- and nine-man fronts and pick apart an average secondary.

For McCarron, the Iron Bowl will serve as a redemption game, not only for the LSU performance this year, but also for last year’s game against Auburn. On the Tide’s final drive in the 2010 contest, down 28-27 with 51 seconds left, McCarron stepped in for an injured Greg McElroy. Fans hoped to witness the emergence of a future star. Instead, they watched in dismay as McCarron went 0-for-4, sealing Alabama’s tomb in the darkest hour of its season. The Mobile native was haunted by the performance all offseason, and many fans argued that it should have tipped Alabama’s preseason quarterback showdown in favor of freshman Phillip Sims. But since winning the starting spot, McCarron has shown that the right choice has been made, and this year’s Iron Bowl will clearly be a part of the young quarterback’s legacy at Alabama.

The one area in which the Tigers hold an advantage over the Tide is on special teams. Alabama long-range kicker Cade Foster is 2-of-9 on the season and proved in the LSU game that he can be a liability. Conversely, Auburn kicker Cody Parkey is a combined 11-of-15 with a long of 43 yards. This game doesn’t figure to come down to a field goal or two, but if the Tigers keep it close, Auburn coach Gene Chizik would be more comfortable sending his kicker out with the game on the line than would counterpart Nick Saban.

Ultimately, Alabama’s talent and experience will do away with a young Auburn squad. Though analysts say it’s sometimes best to throw out the record books in a big rivalry game like this one, the Tide appear too talented and too determined to let underdog Auburn deny them a shot at redemption.

There has always been bad blood between the Crimson Tide and the Tigers, ever since their first meeting in 1893 when Auburn defeated Alabama, 32-22. Afterward, a conflict arose over whether the game should be counted toward the 1892 season or 1893 season, and created such a fierce disagreement over the next decade that the series was temporarily suspended beginning after the 1907 tie game. From then on, it’s been a 365-day-a-year, name-calling, finger-pointing obsession between fans that comes down to a single game every season: the Iron Bowl.

Eight of the past 10 Iron Bowls have been decided by 10 or fewer points. Auburn was the victor in 2010, while Alabama won in 2009. Last year, the Auburn Tigers were an unanticipated force to be reckoned with. Their journey to securing the 2010 SEC championship and eventually the BCS National Championship titles was a classic story of an undervalued group that thrived on the play and leadership of a small group of stars.

This year, the absence of a veteran roster and its two game-changing players has made Auburn’s road a difficult one. The Tigers have struggled with a poor defense and two incompetent quarterbacks. Neither Barrett Trotter nor Clint Moseley has had what it takes. And have I mentioned that 75 percent of the roster consists of freshmen and sophomores?

Those Tigers stand no chance against Alabama’s dominant defensive front. As much as I’d like to say otherwise, the outcomes against opponents like Arkansas, LSU, and Georgia point toward more of the same against Alabama. Granted, the game will be played in Jordan-Hare Stadium, and home field might give Auburn somewhat of an advantage. But the Tigers simply don’t have the talent or manpower to upset Bama. No excuses, just the cold, hard truth.

It’ll take a couple of years for the Tigers to regroup. As for Alabama, you have to respect a team that knows what they’re doing. They know how to play off an opponent’s weaknesses, and that knowledge is what likely pushes them ahead so often. In this game, they’re simply the better team based on every aspect of the game.

Following a disappointing loss to no. 1 LSU, Alabama will be out for blood and will be hopeful to persuade BCS pollsters that it deserves another chance at the undefeated Tigers.

This game will look nothing like last year’s miracle comeback, when Auburn bounced back from a 24-point deficit to win 28-27 in the final minute of the game. Alabama will again secure a substantial lead over the Tigers, but won’t have to work to maintain it.

And hell, we’ll let ’em have the win. After the way Cam Newton humiliated them last year, they deserve it.