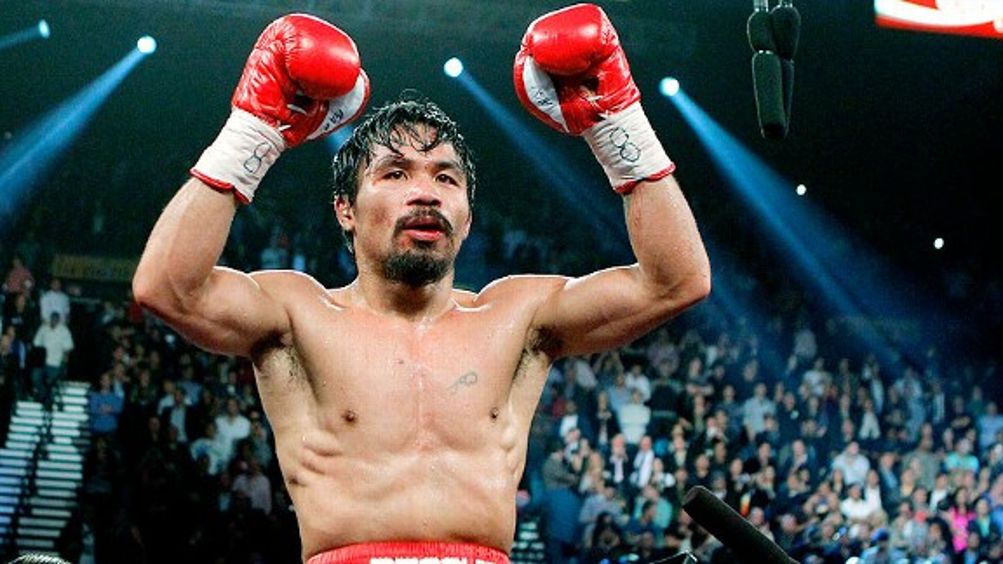 After the bell rang to close the 12th round of Manny Pacquiao and Juan Manuel Marquez’s welterweight championship fight Saturday night, Marquez walked to the ropes, faced the crowd, and looked out with a triumphant, world-beating, told-you-so snarl. He raised a gloved fist and continued mean-mugging the audience of 16,368 at the MGM Grand Garden Arena in Las Vegas for what might have been the sweetest three to five seconds of the lightweight champion’s career. He had just picked apart Pacquiao, his in-ring nemesis and the fighter considered — until Saturday, at least — the best, pound-for-pound, in the world. The crowd serenaded him, “Mar-quez! Mar-quez!” while Pacquiao trudged back to his corner to await the decision.

He had done it. Marquez had really done it. He stunned Pacquiao with lead uppercuts and straight right counters; he ducked under and backed away from Pacquiao’s murderous left hand, the same fist that had knocked Marquez to the canvas four times in their previous two fights; and he did something I can’t remember seeing ever: He made Pacquiao look tentative. Before the fight, I wondered if Marquez would be able to withstand the multi-punch combinations Pacquiao had used to make mincemeat of every fighter who dared to engage him since the last Marquez fight in 2008. Well, that turned out not to matter, because Marquez stymied those combinations before Manny could get off, usually by popping Pacquiao right between his eyes. Marquez forced Pacquiao to fight his style, and he appeared to win — and he did it in front of Erik Morales and Julio Cesar Chavez, two of the greatest Mexican fighters of the past quarter-century. It was a beauty of a performance, worthy of the crowd’s continued chants: “Mar-quez! Mar-quez!”

This was his moment. Until it was not.

What happened next: A majority decision. Michael Buffer announced the winner and still champion. The word “bullshit” was muttered throughout press row. Thousands of Marquez fans booed the decision, half-full aluminum beer bottles started raining from the upper decks, and promoter Bob Arum confessed that he worried Mexican fans wanted to lynch him.1 But rather than tossing another fight postmortem into an Internet boxing gruel that’s already brimming with accounts of what happened in the ring and in the judges’ brains,2 I want to focus on how this third chapter of Pacquiao-Marquez has changed the way we look at the fights’ major characters, perhaps not forever but for the time being.

Let’s start with Nacho, Marquez’s Hall of Fame trainer and the cigar-chomping, muscle-car driving Yoda of Mexican boxing. Well, he’s far more eloquent than Yoda, but Nacho’s mysterious aura (due in no small part to his wise-but-weaselish demeanor) and his habit of delivering nuggets of insight wrapped in abstraction seem cribbed from the world of Lucasfilm.

If Marquez had gotten the decision, Nacho would have seemed like a prophet for predicting how easily Marquez could handle Pacquiao’s improved boxing technique. “We’re really glad because we’re going up against a fighter whose punches are well thrown,” Beristain said in the first episode of HBO’s 24/7. “It’s easier than taking on a wildcat who might make some strange move at any time.”3 Nacho was right. Pacquiao never just bum-rushed Marquez and tried to knock his head off, which seemed to be Manny’s entire game plan in the first fight and a still-significant part of it in the second match. And against the more complete Manny Pacquiao on Saturday night, Marquez appeared more in control of the fight than ever before.

Nacho’s prediction turned out to be correct, but since his fighter lost, the trainer won’t get much credit for it. Instead, Nacho is the goat, and along with all the gold stars on his Hall of Fame résumé, he will also be remembered for telling Marquez that he was winning the fight before the last two rounds. I agree with him, but after crying robbery after Marquez was denied victory by the first two decisions, you wonder why in the world Nacho would trust the judges to come through for them in this fight, when Marquez’s opponent is now the acknowledged best fighter in the world. There’s no way to tell if Nacho’s confidence influenced Marquez’s slow 12th round. Pacquiao also fought a pretty passive final three minutes, but the two judges whose scorecards provided the winning margin both gave Manny the round, and Nacho gets the blame.

Marquez goes down as the martyr. After their first two fights, we said that he looked better against Pacquiao than almost everyone else; now, we’ll go one step further and say that he made Pacquiao look bad for much of their third match. And yet he still fell short. Boxing has a way of creating these tragic losses, when a fighter seems to do everything right but somehow manages to lose. Sometimes it’s because he gets clocked in the final round. Sometimes it’s because of an accidental head-butt. Sometimes, as in Marquez’s case, it’s because of the scorecards. At his postfight press conference, Marquez kept asking, “What I need to do? What I need to do?” He sounded dejected and confused, like he had accepted that it was his fate to lose close decisions to Pacquiao but couldn’t understand why. “I really believe that I need to drop him,” Marquez said. “And if I drop him, they are going to put him back and put him to fight, and they are going to give him the fight again.”

It won’t be much consolation to him, but Marquez’s legacy won’t be tarnished by this loss. A certain type of glum fight fan — the kind who constantly wonders what could have been — will savor this disappointment more than a Marquez victory. They’ll recall his effort and the shock of hearing the decision go against him. Tragedy is built into boxing, and Marquez suffered one of the sport’s most poignant kinds of defeat: when a boxer performs at his very peak, comes within a hair of achieving greatness, and then has it yanked away. Marquez’s win would have been memorable. His loss, for me, and probably for many other boxing fans, will be unforgettable. The same way my father occasionally grumbles, “Hagler beat Leonard, damn it” while brewing his morning coffee or grouting tiles in the bathroom, I feel like this fight will stick with me. Someday, my kids will probably wonder why their father insists on making them watch a video of a puffy-faced, naked Mexican prize fighter who is covering himself with a sombrero explain how he got jobbed. My answer: They need to understand.

Roach is the one character who leaves this drama in pretty much the same shape as he entered it. Great trainer, good guy, and the most iconic glasses since Kurt Rambis’ stint with the Showtime Lakers. And Roach bolstered that impression by saying over and over again that Marquez deserves a rematch. He may not want Pacquiao to face Marquez ever again, but what’s right is right.

Pacquiao, on the other hand, underwent a change I never thought I’d see. He began the fight as boxing’s favorite son and ended it as the night’s villain. Of course, he did nothing villainous over the course of the bout. He fought hard, didn’t have a great night, and got the decision, as popular champions often do. But after the decision, after the lusty boos from thousands of disgusted fans muted his postfight interview with Max Kellerman, after MGM security personnel had to hustle him out of the arena while fans lined the aisles to scream, “You suck!” and shower him with popcorn, it was hard to see Pacquiao as the charming philanthropist congressman with thunder in his fists and Peter Cetera music in his heart.

He was no longer the people’s champ, but rather Pacquiao, Inc., selling a stunning array of junk: from MP8 cologne and Pacquiao hand sanitizer to the endlessly ridiculed Pacquiao Produce vegetables and his personal line of bogus power-balance bracelets. By buying a bracelet, according to some casino signage, you could “Help Manny Knock Out Poverty!” Pacquiao, Inc. is big business, and after the decision, it was hard to banish the thought that he was simply too valuable to Top Rank and Bob Arum and Las Vegas and the sport of boxing to allow him to lose. Who cares if it felt and smelled a little dirty? We’ve got cologne and hand sanitizer for that!

It’s unfair to blame Pacquiao for winning the decision. The judges chose to give him a close fight. Pacquiao can only do his job, which is to train hard, go into the ring, and try to win. But as the face of boxing, he’s going get smudged when fans start feeling like the sport’s powers are trying to pull a fast one.

Still, it’s unlikely that the public can stay mad at Pacquiao for long. His public personality is too winning and too gracious and he’s too talented and exciting of a boxer (even if he didn’t look so hot against Marquez) to remain on people’s bad sides. Besides, boxing will need him to play hero again if Pacquiao and Floyd Mayweather can strike a deal to fight next year. There’s no bigger bad guy in sports than Mayweather, and Pacquiao will come into a potential fight with him as a heavy underdog thanks to his underwhelming performance against Marquez. The script will be reset, and Pacquiao, a smaller fighter, will once again be challenging a bigger, meaner man. What kind of ending does that script have for Manny Pacquiao? At this point, not many experts would pick him over Mayweather, but if you still want to purchase the $70 pay-per-view, you can find out! Act now and we’ll even throw in a commemorative set of Manny Pacquiao Philippine peso coins and the MP Shake Weight.

To read Jay Caspian Kang on the reaction to the fight in Mexico, click here.