Zack Greinke Goes Streaking: The Quiet Recent Dominance of the Dodgers’ Other Ace 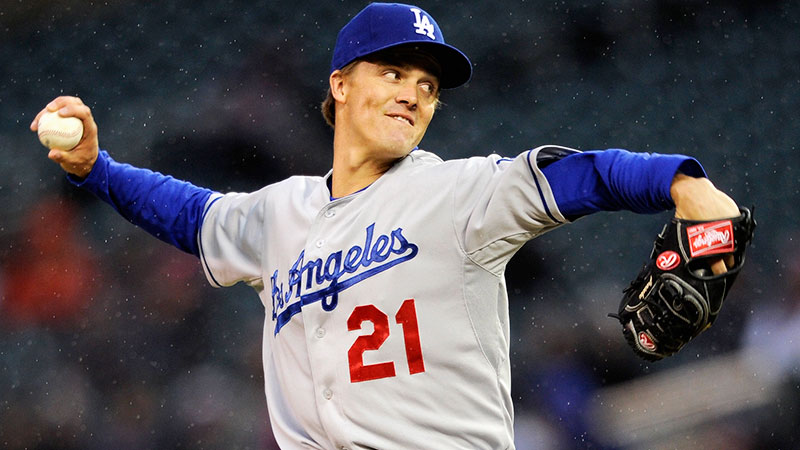 Some of the Los Angeles Dodgers had a hard time with the cold in Minneapolis on Wednesday night, going a step beyond those already undignified-looking hunting-style caps with ear flaps to don full balaclavas. Yasiel Puig and Adrian Gonzalez, for instance, were bundled up so tight that I expected one of them to cut open Juan Uribe with a lightsaber and note how much worse he smelled on the inside.

Florida native Zack Greinke had no problems with the weather, improving to 5-0 after allowing just one unearned run in six innings while walking one and striking out six. That kind of outing has become the norm for Greinke, who is now on an impressive streak made up of arbitrary endpoints: He’s gone at least five innings in his past 29 starts and hasn’t allowed more than two earned runs in his past 18. And that doesn’t count his three playoff starts from last season, in which he went six, eight, and seven innings and allowed two earned runs in each.

Greinke hasn’t really, truly been beaten up since last July 3, when he allowed five runs and walked seven in five innings at Coors Field. That was 10 months ago. If you’d asked me then who Iggy Azalea was, I’d have assumed you were talking about the shrubbery outside Andre Iguodala’s house. And those shrubs would’ve still been in Denver.

Consistency is one of the most prized qualities in a starting pitcher, and consistency the likes of which Greinke has shown since last July is rare. According to Baseball-Reference’s Play Index, since 1914, only Roger Clemens has delivered a longer streak of starts with two earned runs or fewer. Even the best pitchers experience hiccups over the course of 18 starts, or 33. Sometimes guys capable of the most remarkable dominance don’t have their best stuff, or their best command. Justin Verlander gets hit hard from time to time. So do Jose Fernandez and Greinke’s teammate Clayton Kershaw. (I had to look it up to check, but yes, it appears that Kershaw gets beat up sometimes.) Cliff Lee, the steady veteran lefty who never walks anyone, sometimes goes an entire month without pitching well.

And it’s actually kind of odd to see this level of consistency from Greinke, who’s been one of the best right-handed pitchers in baseball for at least five years now, but who’s hardly traveled a direct path. Greinke posted a 120 ERA+ in 145 innings as a 20-year-old rookie in Kansas City, then spent three years either pitching badly or not pitching at all as he learned to control his social anxiety, questions about which (unfairly) follow him to this day. Then, in 2009, he posted perhaps the most remarkable season for a starter since turn-of-the-century Pedro Martinez. Greinke has never come close to that level since, though he’s been effective everywhere he’s pitched.

While Greinke has gone at least five innings without allowing more than two runs in each start this season, he’s yet to go more than seven innings or shut out his opponent. We think of the modern-day ace as a pitcher who consumes innings in addition to strikeouts, and Greinke hasn’t done that. He also doesn’t need to. The Dodgers have a good offense and good bullpen, meaning six innings of two-run ball is almost always good enough to win, as has been the case this year: The Dodgers are 5-1 in Greinke’s starts.

Greinke’s success hasn’t been fluky — while he dodged a couple rallies last night, he’s striking out almost eight batters for every walk this year — but the immutable law of baseball is that it’s unpredictable. So while it’s unlikely the Dodgers have found a new savior who will never allow more than two runs in a game from now until the end of time, Greinke’s streak is a nice reminder that the Dodgers have more going for them than Kershaw and Puig, and that Greinke himself is still really good.

The Atlanta Hawks Stand on the Verge of Getting It On