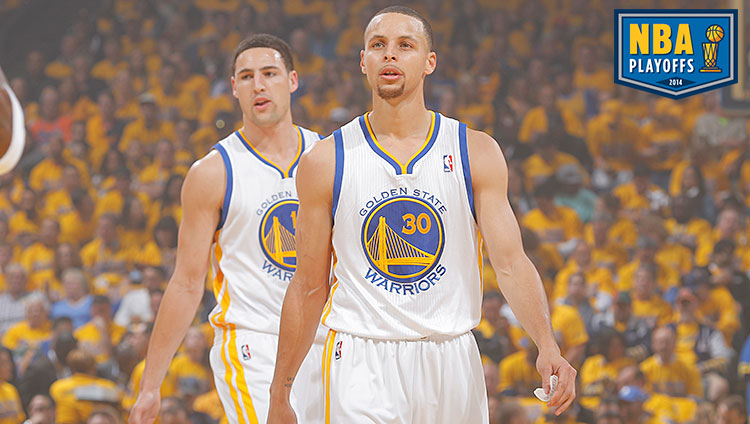 On April 19, the Warriors were in Los Angeles to square off against their bitter rivals in Game 1 of their overqualified first-round series. Early in the first quarter, Stephen Curry inbounded the ball to Andre Iguodala, who stood along the left wing about 30 feet from the basket. After making the pass, Curry bolted, using a pair of screens to traverse the baseline. Every defender took note, and like a giant magnet, Curry’s off-ball migration yanked on the position of each and every Clipper on the court.

By the time Curry arrived beyond the arc along the right wing, he had company. The screens slowed down Chris Paul, so both Matt Barnes and DeAndre Jordan did their best to help. Klay Thompson noticed that, and casually ran from the free throw line to the left wing, where Iguodala tossed him the ball for a wide-open 3.

This is what the play looked like in real time.

Everybody knows that the Warriors backcourt includes two of the best marksmen in the NBA; many also are aware that, incredibly, Curry and Thompson ranked first and second, respectively, in made 3s during the regular season. However, it’s easy to miss the tactics and teamwork used to make all those splashes. Those shots don’t just happen; they are engineered.

That play above is called “double exit.” It’s an example of that engineering, a sequence of coordinated cuts and screens designed to create defensive chaos and offensive opportunities. And it works. A lot. Have a look for yourself:

One of the most amazing things about Curry is that even though his reputation motivates every defense in the league to key on him, he still manages to hit more 3s than anybody else. And he hits them at crazy rates. His ridiculous shot chart is the bar by which we can measure every other great perimeter shooter in the league. 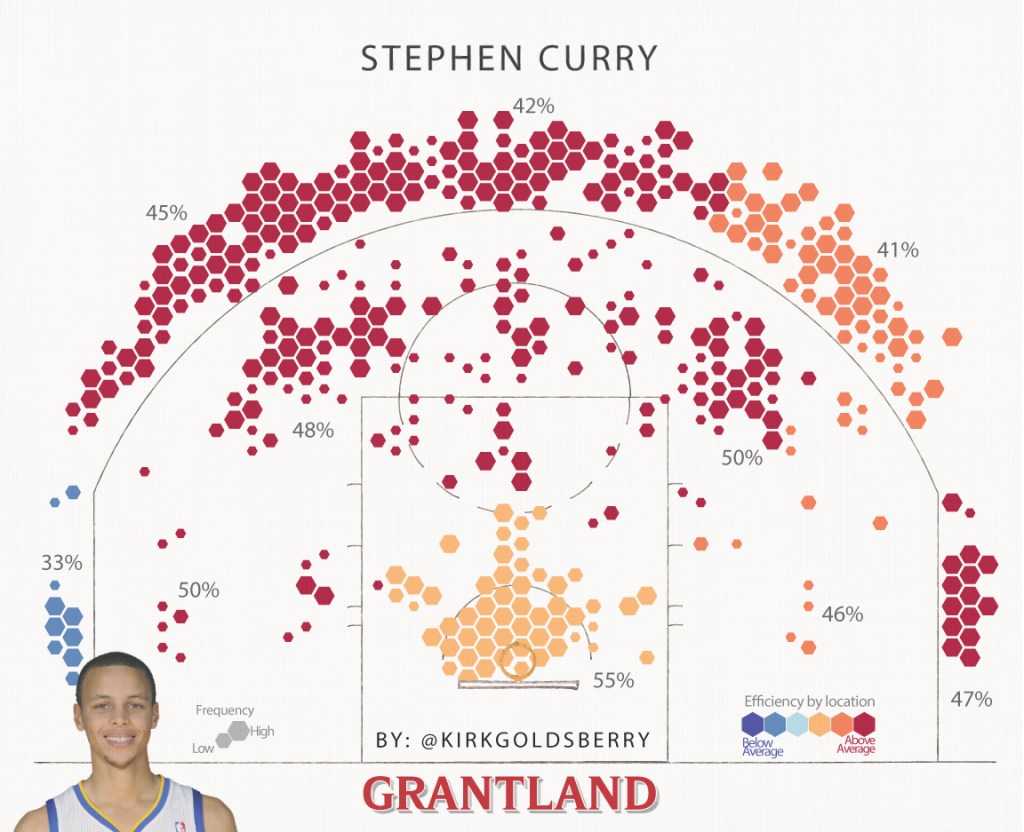 So, how does he do it? How does he get this volume? The answer involves lots of screens by bigs and clever plays engineered to get him open. In this next example, the Warriors use a pair of drag screens set by bigs to free up Curry near the top of the arc. Given his shooting prowess, it’s easy to overlook his becoming a solid NBA playmaker. While some of these picks result in open shots or open driving lanes for Curry, other times they prompt switches that enable him to make a key pass.

A recent study by the Harvard Sports Analysis Collective found that the Warriors passed the ball less frequently than any other team in the league this season. At first glance, that number may seem bad. But when you consider who their primary ball handler is, it becomes less objectionable.

Curry is not a normal NBA point guard. He’s not Jeff Teague, Ricky Rubio, or Brandon Jennings — he’s a portable jump-shooting savant who also happens to run his team’s offense. He perpetually surveys the floor in hopes of trying to find the Warriors’ favorite scoring option: himself.

Curry was seventh in the NBA in points per game this year; the only point guard in the top 10 of that category. Even while in point guard mode, he weaves around like a merry snake twining through the woodpile (h/t to Kesey), searching for the perfect little moment to attack. There’s no other guard in the league like him.

Relative to normal NBA shooting standards, Curry’s a freak, and I’m not just talking about his volume or his efficiency. Across the league, 84 percent of made 3s were assisted during the regular season; only 46 percent of Curry’s league-best 261 made 3s during the regular season were assisted. That’s ridiculous. Curry made 143 unassisted 3s this year; for context, Ray Allen had a total of 116 3s; Dirk Nowitzki had 131.

Out of 21 NBA players who made more than 150 3s during the regular season, Curry is the only one whose unassisted makes outnumbered his assisted makes. Thompson is also in that group, but teammates assisted on 95 percent of his made triples. In other words, while both guys are fantastic spot-up shooters, Curry has also become the standard-bearer for shot creation beyond the arc.

Thompson is a spot-up guy, but the Warriors also love to get him looks. Here’s a play where, unsurprisingly, the key action involves a big freeing up Thompson with a screen. 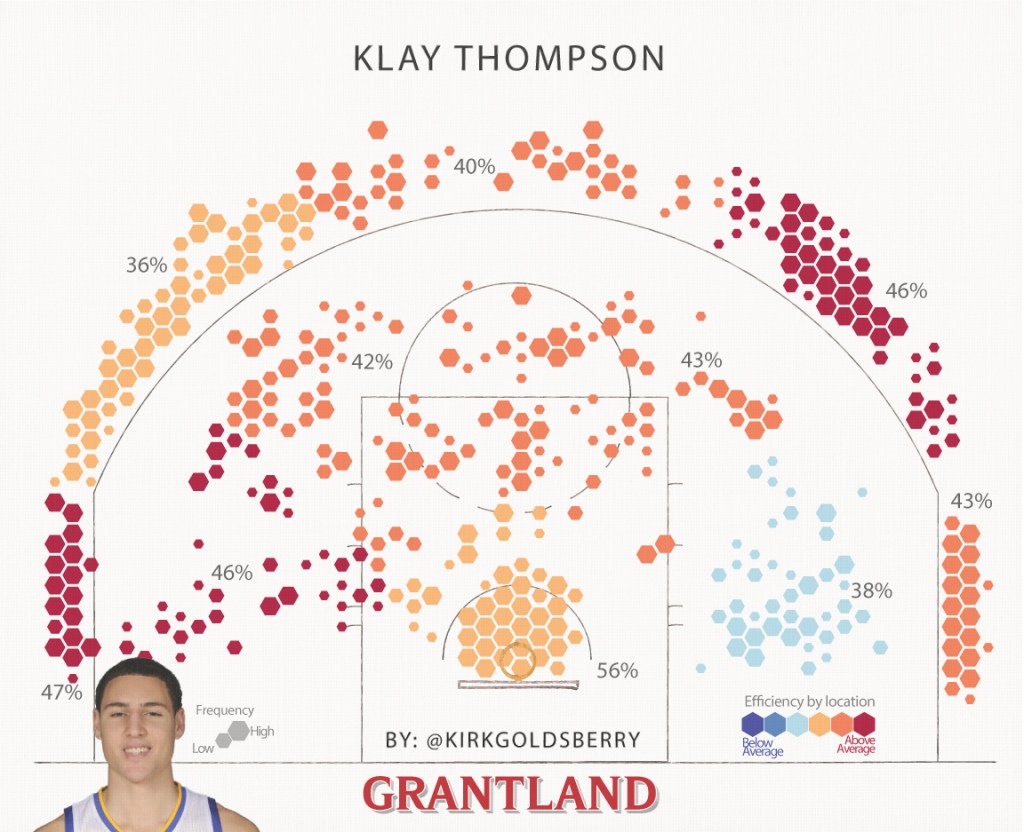 Together, the Splash Brothers are one of the most entertaining duos in the game, but it’s important to remember that the origins of their brilliance often lie in the not-so-glamorous grunt work of screeners and the nifty behind-the-scenes architecture of the coaching staff. Unfortunately, if the Warriors don’t win their next two games against the Clippers, that troubled coaching staff may not be around much longer; after last Tuesday’s emotional loss in Los Angeles, the Warriors not only find themselves on the brink of playoff elimination, but also on the brink of major organizational shifts, as a growing chorus of reports seems to indicate that Mark Jackson won’t be around much longer.

Regardless of his near-term fate, it’s unfair to label Jackson’s Warriors tenure a failure. After all, just two years ago, the Warriors were 20 games below .500; this year they were 20 games above that mark.  That’s a remarkable turnaround, and expecting much more than that borders on greed. And even if they lose this series, it should be noted that this isn’t a normal first round; in an ordinary year, the eighth-best record in the league affords you an easier first-round opponent than a team led by Chris Paul, Blake Griffin, and Doc Rivers.

Lastly, it’s crucial to note that during Jackson’s time with the Warriors, they have become one of the most fun teams to watch in the NBA. While that may not give their fans much solace, given the depressing chaos of the last few days, we should appreciate that now more than ever. Golden State basketball is truly FANtastic.

Zack Greinke Goes Streaking: The Quiet Recent Dominance of the Dodgers' Other Ace