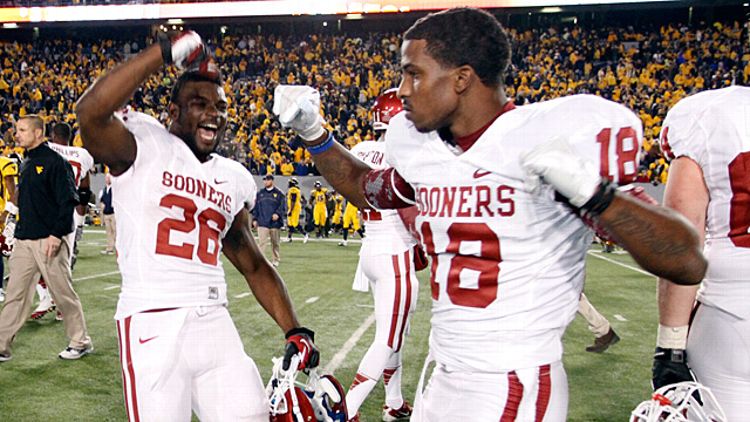 It’s Rivalry slash Thanksgiving Week, when teams who have historically aggravated one another by virtue of shared geography, but who may not even be in the same conference in 2012, meet up for an annual gathering of bad feelings. This is the week for Florida–Florida State, Georgia Tech–Georgia, South Carolina–Clemson, and more. But before we get to the top 10 games, let’s take a quick look at the perfect scenario for the final few weeks of college football, and let’s do it in stream-of-consciousness form. For the ultimate comedic and poetic payoff, here’s what has to happen:

First, none of those outcomes are unlikely. All of them put together? Highly unlikely. But humor me for a second, because these are the teams that would earn automatic BCS berths if that scenario plays out: Georgia Tech, Georgia, Louisville, Wisconsin, UCLA, and Oklahoma. And the national title game would probably be Notre Dame vs. Georgia. Now, let’s say Notre Dame, at 11-1, loses to 11-2 Georgia. Also, Ohio State beats Michigan this week.

The result? Zero bowl-eligible teams with even a one-loss record, and a BCS champion in Georgia that lost 35-7 to South Carolina, and suffered a hypothetical loss to Georgia Tech. The whole college landscape is a dusty wasteland. And then, rising amid the destruction, like a glorious phoenix, is Urban Meyer with his 12-0 Ohio State team. So riddle me this — could the AP poll, which is independent of the BCS, really put the Buckeyes anywhere but no. 1? I say no, and that means Ohio State would win a split national championship. The same Ohio State that’s banned from postseason play because some kid got a free tattoo, and the same Ohio State that barely beat Cal at home, escaped from Indiana, and needed a miracle to beat Purdue in overtime.

And when all that happens, I’m going to phone up the BCS and just start laughing in their faces. A dude can dream.

10. Wisconsin at Penn State
This is Wisco’s chance to thoroughly disgrace itself before playing for the Big Ten championship. I can’t wait to see Bret Bielema run stubbornly up the middle on any third- or fourth-and-short situation, and then give his best puzzled caveman expression on the sideline when it doesn’t work. The Big Ten makes me angry.

8. Georgia Tech at no. 3 Georgia
Have I told you I followed quarterback Vad Lee’s high school team around his senior season on their state championship, and wrote a series of articles about them for grad school? Oh, I did? I did tell you that last week? That’s because I’m pathetic and tell everybody that exact same story every time Vad Lee’s name comes up. I’m like a babbling old man with whom you try to avoid key words that trigger certain memories. Like, “don’t say anything about politics, because he’ll tell that half-hour story about the time he confronted Gerald Ford at a VFW parade.” On the other hand, the Vad Lee story was one of the most fun things I’ve ever done in journalism, so screw you and your judgments. (I’m not going to link it here, because nobody cares, but Google “The Hillside Journey” if you’re dying to read it.) Anyway, Vad Lee is an awesome person and the most incredible high school athlete I’ve ever seen, and I was secretly glad when he played well against Duke last week. I hope he beats the hell out of Georgia all by himself.

Sorry, I can’t resist, so here’s my favorite Vad Lee high school story: In the championship game, Hillside played a team from near Winston-Salem at Wake Forest, so it was essentially an away game. On the opening kickoff, the Hillside return man got the wind knocked out of him, and the place went nuts when he couldn’t get up right away. There were about 100 or so Hillside fans in the stands, and they weren’t making any noise. It was a bad start from a psychological standpoint, but five plays later, Lee escaped a near-sack, scrambled right, and threw the ball 50 yards in the air to a receiver in the corner of the end zone. The silence from the home crowd was a combination of “holy shit” and “oh, crap.” By halftime, the score was 40-0, and they never got loud again.

7. No. 21 Oklahoma State at no. 13 Oklahoma
The Old Oak Barrel Red Rio Wagon Settler’s Land Rush Showdown at the Hoedown Barn Dance Bonanza! So much tradition. So much masculine brio. Have you seen that commercial where everyone yells “Hello!” when that high school player does a flip, and then at the end he meets Bob Stoops? Man, oh man. That Bob Stoops.

6. No. 12 South Carolina at. no. 11 Clemson
Here’s a question for the masses — we all know that football coaches are paranoid, monomaniacal lunatics who like to degrade people in their free time and couldn’t identify their own progeny in a class picture, right? But why are they so different from basketball coaches? In my time around college hoops, the coaches I’ve met have mostly been interesting, thoughtful people with senses of humor and perspective. What makes them more human-like than their football counterparts? (This question, as you could probably tell, was inspired by Spurrier.)

5. No. 5 Oregon at no. 15 Oregon State
Chip Kelly, on the other hand, seems like a man you could reason with. This should be a fun game, and my actual prediction for the coming weeks is that Oregon will make that national title game against Alabama. (Is there any really good team that’s flown under the radar more than Oregon State? And now, even if they beat Oregon, they still won’t get a ton of respect because Stanford stole their thunder.)

4. No. 8 Stanford at no. 17 UCLA
Of course, for Oregon to regain their spot in the big game, they have to play for and win the Pac-12 title, and in order to do that, Stanford has to lose to UCLA. It’s tempting to lean toward the Bruins at home in this game after their great win against USC, but I can’t ignore the fact that Stanford coach David Shaw was right about the Oregon game: His team really should have won by two or three touchdowns instead of eking out a win in overtime. Also, Stanford’s defensive secondary is really, really good, so Johnathan Franklin best be prepared to have the game of his life for the second week in a row. Still, I like the Bruins to grind this one out and give Oregon new life.

3. No. 4 Florida at no. 10 Florida State
This is a delight. I feel like Jimbo Fisher needs to win this game or everyone in Tallahassee is going to hate his guts. And there’s no doubt in my mind that the Seminoles blow it. By the way, we came frighteningly close to a Florida State–Notre Dame BCS title game this season. The only team standing in the way? The North Carolina State Wolfpack. Being an NC State fan is tough, but at least they’ve got that.

2. No. 1 Notre Dame at USC
Notre Dame is going to lose this game, and the explanation is simple: It’s really, really hard to go undefeated. If Alabama can’t run the table, neither can Notre Dame. I don’t care about USC’s loss to UCLA or Matt Barkley’s injury or Lane Kiffin’s snide little face. Notre Dame is a team that barely beat Pittsburgh at home three weeks ago, and won at Boston College 21-6. The peak of their season was a 30-6 win at Oklahoma, and now they’re ready for a loss. These are the rhythms of the sport, and it’s why you should laugh at anyone who sees six undefeated teams in Week 9 and legitimately worries that more than one or two of them will finish without a loss. These things sort themselves out. Sorry, Irish.

1. No. 21 Michigan at Ohio State
You thought I was kidding about my doomsday scenario? The blueprint is in place, and now it’s up to Urban Meyer to execute. And by the way, note to Michigan: This is your one chance to beat Ohio State in the Meyer era. Period. Starting next season, his teams will progressively get better and better, and you will lose by 90. Good luck.

The Mystery of Collin Klein