The Mystery of Collin Klein 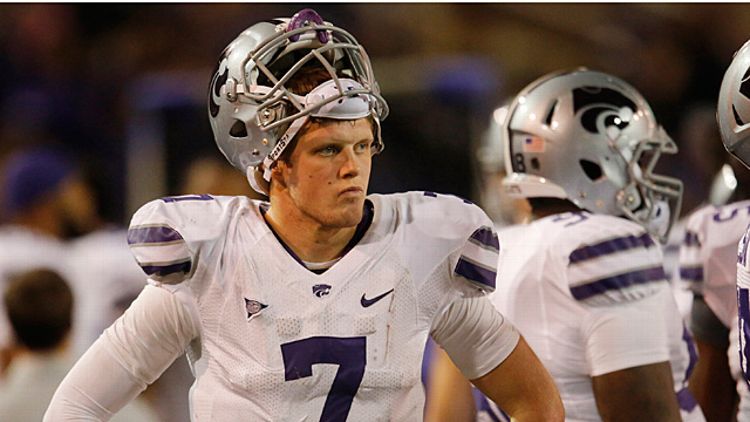 On November 3, on a third-quarter drive against Oklahoma State, Kansas State’s Collin Klein was showing why he was the best quarterback in the nation. He passed and ran and finally plunged into the end zone. But Klein got hurt. Afterward, a source told Yahoo’s Dan Wetzel that Klein “could not recall the details of the drive, including the fact he scored.” The Wildcats coaches took Klein’s helmet away. He spent the final quarter and a half standing on the sideline.

Two weeks later, Collin Klein wasn’t even playing like the best quarterback in the Big 12. In a 28-point loss to Baylor, he threw three picks. He ran for a 2.3 yards per carry. When he walked off the field, he’d lost the Heisman, his shot at an undefeated season, the works.

What happened is obvious, no? Klein got hurt on November 3, and he hasn’t been the same since. But we’ll never know for sure, because between Point A and Point B, Kansas State launched one of college football’s classic misinformation campaigns. It involved Klein, his family, and the Wildcats’ sainted coach, Bill Snyder. It served to obscure why a great quarterback, the guy called Optimus Klein, became mortal overnight.

Let’s start at the beginning. After the Oklahoma State game, Bill Snyder conceded, “Obviously [Klein] was injured or we wouldn’t have taken him out.” In my search of published statements and press conferences, this is only time I found Snyder admitting that Klein was even injured.

Two days later, on a conference call with reporters, Snyder had changed his tune. “He seems fine to me,” he said. But in his press conference the next day, Snyder also noted that he never discussed injuries with reporters, which made his diagnosis suspect. “I don’t want to put any young person in any undo jeopardy whatsoever,” he said. “That’s why I don’t address injuries.”

Klein didn’t appear at the press conference — Snyder said he didn’t want reporters asking him about the injury.

The omertà extended to Klein’s family. His mom, Kelly, told ESPN, “He looks great and he feels great. I think he is going to be 100 percent this week.” When asked what exactly was wrong with Klein, she deferred to the Kansas State trainers Bill Snyder had silenced.

Sports Illustrated writer Thomas Lake went to Manhattan and interviewed Klein’s wife, Shalin Spani. He got this: “Shalin could not say what she knew about the current health of her husband.” Thus, we progressed to another state of metaphysical uncertainty: Collin Klein’s wife couldn’t reveal whether she knew how Collin Klein was feeling.

To recap Week 1: Klein’s coach said he was fine, his mom said he was 100 percent, his wife said she couldn’t say either way, and Klein himself didn’t say a word.

On November 10, Klein took the field against TCU. He didn’t look 100 percent. His 105.6 quarterback rating was his worst of the season by 15 points. He threw his first interception in seven games. Klein had one typically awesome run against the Frogs — a 34-yarder on which dove headfirst into the end zone. But the rest of his carries amounted to 14 attempts for 16 yards. Once again, the game stories noted, Klein wasn’t “available” for interviews after the game.

Week 2 of Klein Watch began with a pleasant surprise: an actual Klein sighting! In the clip of his press conference posted on the Kansas State website, Klein wasn’t asked about the nature of his alleged non-injury. But he did say how he felt about it: “No one likes to get hurt, but it’s part of the game and part of the deal.”

Klein’s brother, Kyle, a freshman wide receiver at K-State, told the AP, “I was somewhat worried about him, obviously … I was just hoping he would be alright, which he was.”

Again, to recap: Kyle Klein says his brother has recovered from an injury, whatever it was, and Collin Klein feels that injuries, which he won’t discuss, are part of the game.

On the night of November 17, Klein took the field against Baylor. He looked worse than he did against TCU. Despite playing the 120th-ranked defense in the country — a D that made stars out of Steele Jantz and Trevone Boykin — Klein put up another season-low QB rating — 103.2. He threw three interceptions, as many as he threw in his first 10 games combined. Klein rushed for 2.3 yards per carry, his worst single-game average this season by nearly a yard. But at Kansas State, like other college programs, they don’t talk about injuries.

So why don’t they talk about injuries?

First, there’s Bill Snyder’s reason: “I don’t want to put any young person in any undo jeopardy whatsoever.” Snyder is arguing that if you admit Klein’s head hurts, other teams might tee off on his head. But if Klein’s head really does hurt — if his reported memory loss was the result of, say, a concussion — you might argue that putting Klein on the field was putting him in jeopardy. So what Snyder offers in the name of player safety also protects the coach.

A second argument is that Klein has a right to privacy. Pro athletes reveal their hip flexors to the world. It’s part of being a public figure. But college coaches like to exploit the fact that their players are “student-athletes,” somewhere between amateur and professional. So Kansas State can sell a Nike youth replica Collin Klein jersey on one hand (that’s the professional part) and treat Klein like an unremarkable finance major on the other (the amateur part).

If you think Kansas State is truly concerned about Klein’s privacy, check out the Heisman promo materials they sent out last month. A brochure showed Klein’s scab-covered arms; a Band-Aid — a nice touch — was affixed to the picture. So K-State was canvassing for votes by bragging that Klein plays through pain. The school just didn’t want to reveal the precise nature of it.

A third argument for not revealing Klein’s injury is that it protects his draft stock. The real money Klein can earn comes from the NFL. If NFL teams hear about every (alleged) concussion, then he might fall a round or two.

I’m sympathetic to this argument. But there’s a much easier way to make sure Klein isn’t losing money. It’s to pay Klein for being a college quarterback. If Klein’s going to risk an injury; if he’s going to risk playing with an injury; if his health is going to become an object of fascination to reporters and gamblers and opposing coaches, then he ought to be paid for it. Once we remove the label of “student-athlete,” we see withholding info for what it really is: gamesmanship.

I’m not offended by college coaches lying and fibbing. If so, I wouldn’t follow recruiting. But in this case, the fibs mostly serve to obscure why the guy who was the best quarterback in the country two weeks ago isn’t running and throwing like he once did. Let’s be clear: The institution being protected here is Bill Snyder’s right to be crotchety. The quarterback is the one who looks like a schmuck.

Filed Under: Baylor, College Football, Kansas State, The U