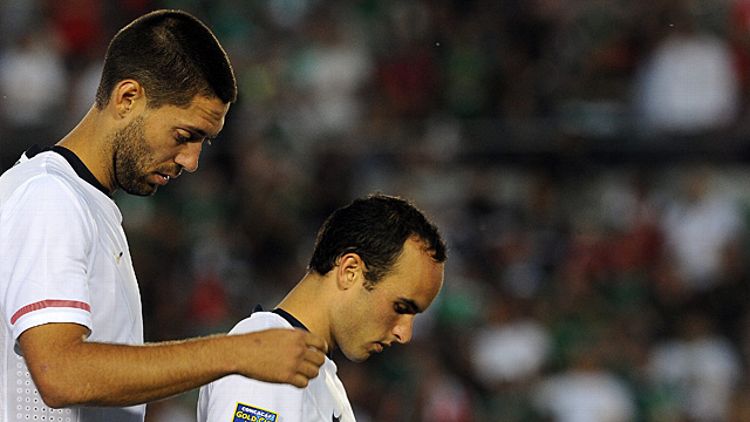 This summer five USMNT players have signed or re-signed with MLS clubs. The most significant of those was Clint Dempsey, who shocked the American soccer community by transferring to the Seattle Sounders from Tottenham Hotspur. Two weeks later, 24-year-old Galaxy center back Omar Gonzalez, the 2011 MLS Defender of the Year and 2012 MLS Cup MVP, signed a Designated Player contract with the Galaxy, foregoing opportunities to play in Europe to stick with the two-time defending MLS champions. Nearly two weeks later, Landon Donovan announced he, too, would be signing a contract extension with the Galaxy, likely meaning that he would end his professional career in Los Angeles.

Last Thursday, when U.S. men’s national team head coach Jurgen Klinsmann announced his roster for the upcoming World Cup qualifiers against Costa Rica and Mexico, five of these six players were on it (Goodson didn’t get a call-up). Those five join Real Salt Lake’s Kyle Beckerman and Nick Rimando, and Seattle’s Eddie Johnson, bringing the number of MLS players on the 23-man roster to eight. (Originally, the number was nine, but on Saturday, Seattle defender Brad Evans suffered an injury in a match against Columbus and needed to be replaced.) Between Donovan, Dempsey, Gonzalez, Besler, Zusi, and Johnson, MLS players could easily occupy four or five spots in the team’s starting 11.

The strong presence of MLS players in the USMNT is not necessarily a new phenomenon. The 2002 World Cup squad — which became the most successful of the modern era by advancing to the quarterfinals — featured a core of MLS characters; six of the 11 who started in the team’s historic first-round victory over Portugal were MLS players. Brian McBride, a member of that 2002 team who played 10 years in MLS and five seasons with Premier League side Fulham, says the times are changing. “2002 is a lot different from the standpoint that there wasn’t really many options to go overseas,” he says. “That’s changed completely now.”

What’s different is that top American internationals are making the decision to stay in or return to Major League Soccer, not because they have to, but because they want to.

“These players have options,” says McBride, “and they’re real options. But they’re making a commitment, and so is the league, and that’s a positive for the future of soccer.”

McBride sees the domestic league stepping up to the plate, financially: “I like the fact that MLS is coming to the table and saying, ‘We want to keep you guys, and while we may not be able to pay you what you could possibly make overseas, we’ll pay you a lot more than what we used to pay or usually pay the top Americans.’ That’s great.”

Cobi Jones, a veteran of three World Cups and the all-time leader in caps for the U.S., who also played 12 years in MLS, agrees: “These moves over the past month or two have been another significant step forward for MLS, bringing national team players back at significant sums.”

After signing with Seattle, Dempsey talked with Sports Illustrated’s Grant Wahl about the $40,000 salary he earned during his first MLS season (2004), and how he lived with a host family to save money. Nine years later, his annual salary with Seattle is around $8 million.

What’s making it possible for MLS to pony up the cash to sign these players? The Designated Player rule. Originally constructed to enable the Galaxy to secure David Beckham from Real Madrid in 2007, the DP rule allows each MLS team to sign up to three players to their team whose salaries, for the 2013 season, count as $375,000 (or $175,000 if he joins after the middle of the season) toward the team’s salary cap of $2.95 million, but whose actual salary can greatly exceed that amount. The club just has to find a way to pick up the tab.

Traditionally, Designated Players have been aging internationals like Beckham and Thierry Henry. This summer, in an odd twist, the DP rule has been serving a new purpose: attracting and retaining top American talent.

The signing of these USMNT players is definitely a boon for MLS, but Klinsmann seems to have conflicting opinions on whether the domestic league is competitive enough for American internationals.

Then, in the days following Dempsey’s move to Seattle in August, he said: “I am thrilled for MLS,” he said, “because you have an outstanding player now hopefully filling more stadiums and getting even more kids and people excited about the game. For Clint it’s a challenge, coming from one of the top leagues in the world, coming back to the U.S. and being back in MLS where we still have to work on a lot of things.”

Gonzalez says that Klinsmann approved of his decision to stay with the Galaxy, but suggested, at some point, he experience European football. “He basically told me he thinks it’s fine that I stay here in MLS, and hearing him say that really put my mind at ease and really made it easier for me to make this decision … I really wanted to know what his thoughts were, because I was already thinking maybe I wanted to stay here with the Galaxy, and to hear him validate it and say it’s fine if you stay for a couple of years, but at some point you should go to Europe, you should see what that’s like to test yourself.”

Klinsmann’s take on MLS seems to mirror the American soccer public’s long-established view of the league when it comes to elite American internationals: It’s a proving ground for young players and a retirement home for aging veterans. But the signings by players like Dempsey, Gonzalez, Zusi, and Besler are changing that perception.