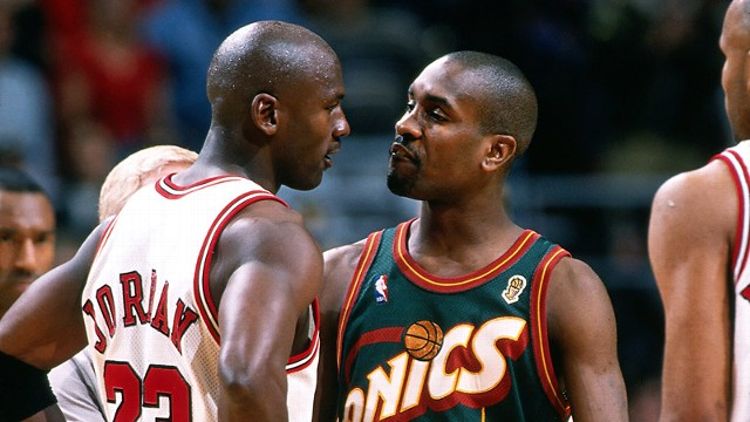 You may have seen this story floating around the Internet today. Example:

Gary Payton says John Stockton was harder to guard than Michael Jordan. "You never could get in his head." (via @YahooSports)

As he told Marc J. Spears over at Yahoo Sports, “Those battles [with Jordan] were a little easier. I would have Jordan get mad at me and go back at me. He knew he was really talented and could do whatever he wanted to. But [Stockton] was more of a challenge to me than guarding someone that would talk back to me. When you talk back to me and say something to me it made my game go to another level. John was one who wouldn’t say nothing and you couldn’t figure him out. He’d keep going in the pick and rolls and he and Karl Malone would score a big bucket. At times I would guard Jordan and get him mad and into other things.”

Payton’s getting inducted to the Hall of Fame on Saturday night, and Stockton will introduce him, which is just perfect. To celebrate the occasion, everyone is rolling out various interviews and profiles, and there can never be enough.

For example, there’s this note from the Seattle Times: “When Payton was a child, his mother used to tell him that he was bound to become a drug dealer. She knew that was the way to get to her son. She challenged him by saying that because his friends were drug dealers, he would be no different, knowing the remarks would spark Payton’s competitiveness.”

That’s so much cooler and more insane than being motivated by a high school coach who cut you from the varsity team.

It’s all a reminder to enjoy the Payton nostalgia this week. The Spears interview is great, and the Seattle Times profile is even better. In a perfect universe, Gary Payton would be planted at the Hall of Fame every day to talk shit to anyone who entered. He’s from an era with better trash talk, better shoes, and much better commercials.

And if you see any discussion of the Stockton/MJ quote, just remember it makes perfect sense. First, because Payton was never ever scared of Jordan. It was part of his charm. Second: His whole life he was fueled by shit-talking. Of course Payton had the most trouble with the one guy in the NBA who didn’t talk back.

2-Day NFL Warning: A Team-by-Team Rundown of the 2012 Rookie Class