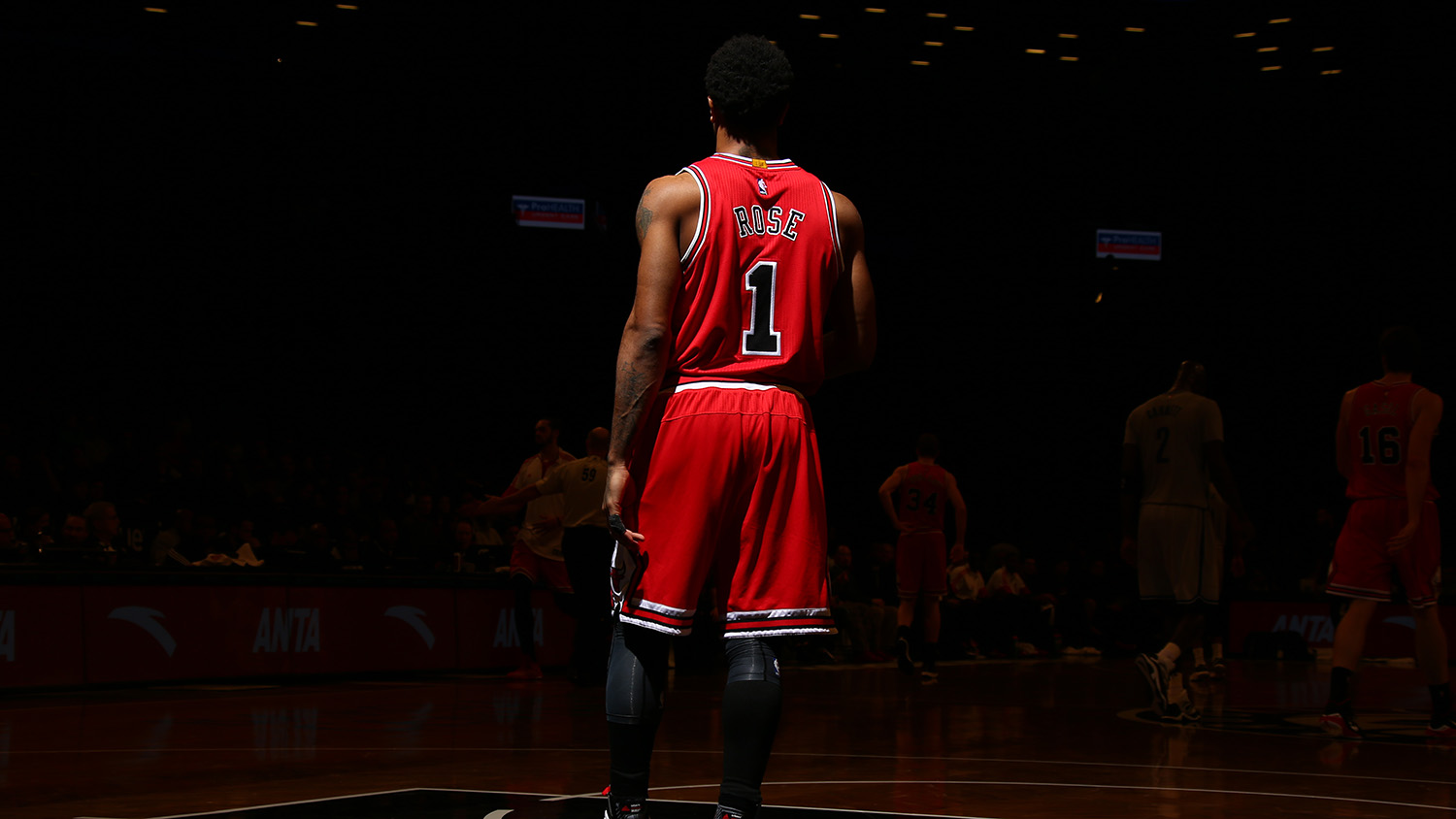 He was electric — explosive in the way that caused jaws to drop and eyeballs to melt. Remember his dunk on Goran Dragic? Rose, a red blur running down the court, launching himself skyward, somehow speeding up while in the air, his body contorted in a C-shape as he cocked his arms back, then throwing it down two-handed on Dragic and landing with his legs astride the entire arena.

In response, Bulls color commentator Stacey King — after the requisite exuberant hollering, I mean — says the thing that’s on everyone’s mind. “Dragic, do you know who this kid is? He is from Chicago.”

“He is from Chicago” is the caption under Derrick Rose’s career. It is the theme of every one of his Adidas commercials, most notably the first spot released after he tore his ACL in the first game of the 2012 playoffs. It opens with Kevin Harlan’s call (“Holding on to his knee … holding on to his knee and down”) and cuts to various scenes depicting the people of Chicago frozen in shock, heartbroken, until the sounds of Rose rehabbing eventually stirs them to their feet once again. If there have been other athlete commercials that actually played on its star’s injury, and the effect that injury had on a city, I can’t remember them. That’s the power of the hometown hero legend.

The problem with that legend is that none of the parties involved — the hero, the fans, the team — can see each other clearly. Pro sports is already a strange mix of the rational and the emotional. Players are stacked and valued as assets and packaged and sold as Your Team. Add to that the legend that builds organically as a city watches a player grow up, and the legend ends up overshadowing everything. Think of the utter confusion and outpouring of anger after LeBron James, son of Akron, spurned the Cleveland Cavaliers for the Miami Heat. Or how the decades-long enmity between Isiah Thomas and Michael Jordan was exacerbated by Chicago, where Thomas was born and bred, falling in love with His Airness.

The facts of Rose’s backstory are, by now, well-known. He was born and raised in the troubled Englewood neighborhood on Chicago’s South Side, a place that saw 16 homicides in the last year within a community of about three square miles. His mother, Brenda, and his three older brothers steered him away from street entanglements. His father is not spoken of.

A top prospect, Rose chose Memphis and coach John Calipari, powering the team to the national championship game. Rose was electric in the title game, just as he had been all tournament, and the Tigers were up four on Kansas with less than two minutes to go. Then it all disappeared in a flurry of bricked free throws, first from Chris Douglas-Roberts, then, with 10 seconds left to go and the Tigers up two, from Rose. Then the whole season disappeared, retroactively vacated by the NCAA once Rose’s SAT score was invalidated, meaning Memphis had played the entire season with an ineligible player. It’s a decision that says more about the upside-down world of the NCAA than about Rose — no one’s vacating the television money — but no matter.

Chicago selected Rose with the no. 1 pick in the 2008 draft (it’s weird to remember a world in which Michael Beasley or Rose was a real debate), and at 20 years old, the prodigal son became the hometown hero: Rookie of the Year in 2008-09, a 62-win season, a lucrative five-year extension, and, at 22, the youngest player in NBA history to win an MVP award.

It’s hard to imagine what Rose’s career would look like if he hadn’t ended up with Chicago. If he had fallen to Miami or Seattle (!!!) or Minnesota, he would still be beloved in his hometown, of course. But would he still have the same isolating pall around him if he didn’t have to carry the hopes and expectations of an entire city, in addition to the pressures of being a potential franchise savior? Does he play 37 minutes a game as a rookie anywhere else than Chicago? Would his injury history be the same without Tom Thibodeau’s grinding style?1 The 2010-11 MVP race became a debate between new-school analytics, which favored Dwight Howard, and best-player-on-the-best-team tradition, which favored Rose. Does he win the MVP award without the hometown hero status?

We can talk about Dwyane Wade or Isiah Thomas or Tony Allen without ever mentioning Chicago. That will never be the case with Rose.

What kind of player, exactly, is Derrick Rose, after the numerous confidence-sapping knee surgeries? At what point, if ever, do the Bulls move on? Being the kid from Chicago clouds all of these questions. Rose, who signed an extension worth $94.3 million over five years in 2011 and whose 13-year deal with Adidas is worth a reported $185 million, recently stated his frank desire to dip into the flood of money flowing into the league’s coffers in the coming season:

“Oh yeah, I’ve been moved on,” said Rose. “This whole summer I had tunnel vision. My mindset was just making sure that I was working out every day, and spending as much time as possible with my son. And focusing on those two things. Making sure my family is financially stable, as far as seeing all the money that they’re passing out in this league. Just telling the truth. Just knowing that my day will be coming up soon, and it’s not for me. It’s for P.J. and his future, so that’s what I’m thinking about now.’’

It was an impolitic thing to say, no doubt. You could make the argument that a savvier pro would not have said it. And yet, it’s also a pretty logical statement for a guy who made it out of Englewood purely on his ability to play basketball. The best-case scenario is a player lasting somewhere into his late thirties to early forties. How long for someone with Rose’s knees?

When the Bulls recently announced Rose had suffered a broken orbital bone in practice, the news was met with dismay and mockery in equal measure.2 This was coming off the back of several weeks of controversy surrounding Rose, stemming from a civil suit filed against him alleging that he participated in a sexual assault. We all know how the hometown hero story is supposed to end. But for the first time, that ending seems more like a fairy tale than ever. You wonder if Rose already knows that.

“This life,” Rose said in 2012, referring to being a star in his hometown, “doesn’t fit my personality.” This season, we’ll find out if that’s still true.