The Plan in the Middle: How Does Jahlil Okafor’s Throwback Talent Fit in With Philly’s Modern Offense? 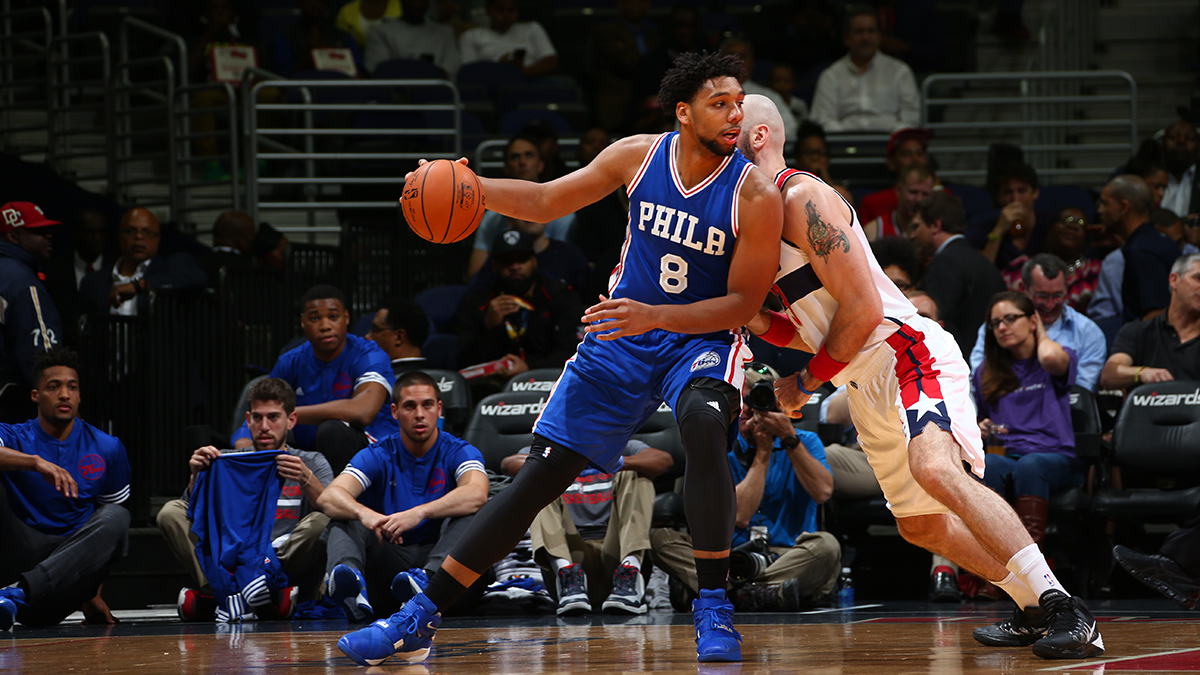 Things weren’t all bad. Jahlil Okafor — rookie center, third pick in the last draft, and assumed cure-all for the Sixers’ league-worst offense — was in the lineup after missing time with a balky knee. He struggled early against Brook Lopez and Brooklyn, getting swatted on a contested shot in the lane, committing a charge on a fast break, and being whistled for a palming violation. “You’re a bust!” heckled the “Jar-rett” cohort. Okafor eventually strung together spoon-fed layups, a midrange jumper, and a point-blank putback. He finished the day with 14 points and a gorgeous, open-floor alley-oop to Nerlens Noel, but went 5-for-13 from the field with five turnovers.

Okafor left Duke as a celebrated NCAA champion and, by conventional wisdom, was the most polished, pro-ready prospect in his draft class. He was a gifted collegiate scorer, a 275-pound glacier whose nimble feet, enormous mitts, soft touch, and twirling spin moves resulted in 17.3 points a game on 66 percent shooting. But in today’s small-ball NBA, with stretch forwards, interchangeable wings, and the rising barrage of 3-pointers, Okafor is primordial.

Following the draft, Sixers general manager Sam Hinkie called him a “throwback” and pondered Okafor’s place in contemporary basketball: “You may hear some people say, ‘Well, you don’t throw the ball into the post anymore the way we did in an earlier era.’ Then again, you don’t see players like Jah in today’s era.” Okafor might be a lizard king who rises from cracked earth to trample cities or he could be an anachronism, doomed to perish among today’s fleet-footed mammalia.

The Sixers organization is nothing if not modern. The team’s disinterest in short-term winning and lust for asset accumulation has offended the self-appointed Defenders of Good Competition and the American Spirit, but the franchise reboot has also embraced sports science, assembled a respected analytics brain trust, and taken an econometric approach to uncovering affordable, overlooked young talent. The Sixers’ forward-thinking outlook extends to their philosophy on shot selection. While the team has not had an abundance of talented bucket-makers on the roster, the Sixers generally miss the right kind of shots. Under coach Brett Brown, the Sixers emphasize a “pace and space” attack that generates smart, high-value looks around the rim and behind the 3-point line. No, Philly does not score nearly as frequently as the Hawks, Spurs, or Rockets, but similar DNA informs the Sixers’ system.

Last season, dumping the rock into the post was not part of the program. The Sixers were 29th in the NBA in post-up attempts (only Atlanta tried fewer) and last in points per possession by an embarrassing margin. Noel, who often found himself stonewalled by burlier defenders, scored only 0.64 points per possession on those plays, futility that ranked in the league’s bottom 14th percentile. Henry Sims and Luc Mbah a Moute were somewhat better, but neither is on this season’s roster.1 Was the Sixers’ lack of success in wringing points out of the post a consequence of doctrine or personnel?

As Brown told Grantland, it was absolutely the latter. “You try to take the realities of your roster — who are your best players, who are your best scorers — and create a system that favors them,” he said. “We needed to play downhill, in open court. We didn’t have a great shooting team. We had to attack the rim and shoot a large quantity of free throws.” With Okafor in the paint, the Sixers have a target they didn’t have a year ago. “I think Jahlil has the legitimate right to put his hand up and say, ‘I can do some stuff in a low-post situation,’” Brown said.

Still, the popularity of post play has dwindled across the NBA for good reason: It’s hard. Out of the 50 players with the most shot attempts from the post last season, only Jonas Valanciunas of the Raptors scored over a point per possession. Even polished bigs like Al Jefferson, LaMarcus Aldridge, Marc Gasol, and DeMarcus Cousins aren’t particularly efficient when operating with their back to the basket. Of the eight teams that posted up the most frequently last season, only two had an offensive rating above league average (Portland at eighth, and Memphis, by a sliver of a point, at 13th). Mike D’Antoni, offensive guru and former head coach of the Suns, Knicks, and Lakers, scoffed at post play in a recent interview with Sports Illustrated. “To go down and put your best offensive player on the block against their best defensive player, it’s just not a great option anymore,” he said. “It just isn’t.”

Brown maintained that post play has value, both as an offensive weapon and as a way to keep big men engaged. “I would ask, ‘Well, who is it?’ before I would give a blanket answer of, ‘No, you can’t post anybody anymore,’” he said. “I do concede that it is most definitely a dying part of our sport. When I first came into the league, it was a really big pin-down league, bringing Reggie Miller and Ray Allen off a lot of pin-downs. And a very close second was posting. You’d dump it into the post, and you’d stand. We always walked that fine line in San Antonio, where we were trying to pick-and-roll Tony [Parker] or Manu [Ginobili] as much as we could. But at times, Tim Duncan needed the ball. You could see it through his facial expressions — the game was buzz-sawing by him. That gets deflating. When you throw one of your bigs a bone and you post him, sometimes it’s because you think the game calls for it and they can score. And sometimes they just need a touch.”

There’s an insistence to the way Okafor posts up, emanating from both his confidence and the gravity of his mass, and the Sixers have obliged, so far, by shoveling him the ball. He has a 33 percent usage rate in the preseason, a possession-devouring appetite that would have placed fifth-highest in the NBA last season, sandwiched between Cousins and LeBron James. Okafor has racked up roughly 19 points and seven rebounds per 36 minutes, but he’s also been bedeviled by turnovers and had trouble establishing deep position against opponents with grown-man strength. His 44.5 percent true shooting percentage is the lowest out of Sixers who will likely make the team, and that’s buoyed by an uncharacteristic 90 percent free throw percentage.

Let’s cut Okafor some slack. He’s 19, has been dinged up, and has played only 75 preseason minutes. It hasn’t helped that Tony Wroten and Kendall Marshall, the team’s top two point guards on the depth chart, have missed the preseason with injuries. There are areas, though, where Okafor needs improvement.

“The first thing is his body, and it’s not even close,” said Brown, who cited Tim Duncan’s weight loss as a key to his longevity. “And we’re going to help him. He’s fantastic in that he wants to be coached. He’s a willing participant. He’s a wonderful teammate — I don’t think it’s going to be pulling teeth. The second is recognizing how teams come at him. Once he gets the ball, what is he going to do? Taking pride in quarterbacking a gym and doing all those things great post players do.” 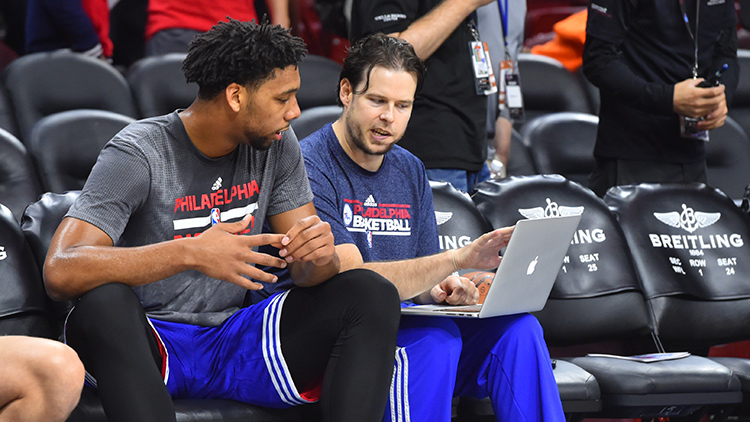 At the moment, the Sixers’ best offensive option might not even be Okafor. Noel, who appeared as unsure as a newborn pony in the first half of last season, looks different now: His jumper and ballhandling have improved and, at least in the preseason, he’s doubled his assists per 100 possessions while playing more at power forward. His per-36 numbers from the preseason rocket off the page: 18.6 points, 11.9 rebounds, 4.2 assists, 4.2 steals, and 1.4 blocks. As bizarre as it might have sounded a month ago, having Noel initiate the attack from the elbow or the top of the key might be more productive than force-feeding Okafor on the block. Both are options that weren’t there last season, and, for once, the team might actually be in a position to take advantage of them.

The Sixers, who had mostly been a collection of raw, elasticized athletes in recent seasons, now have more skill-oriented players than at any time in the rebuild. Robert Covington, Hollis Thompson, and Isaiah Canaan have shown the ability to drain 3s at the NBA level; Nik Stauskas will have the opportunity to wash off the stench of the Sacramento experience; Marshall looked like a capable pass-first point guard before blowing out his knee in Milwaukee last season. The talent level is not going to make the Golden State Warriors tremble, but there might be enough role players to prevent the headlining big men from being completely submerged beneath waves of defenders.

“Every coach is saying ‘How do you collapse a defense?’” Brown said. “The easier way is if you have a guard that can break a defense down off a live ball, off the dribble. We don’t really have one of those. Maybe, for us, it’s going to be rolling Nerlens and Jah to collapse that defense. I think using the post wisely is a real challenge.”

It’s impossible to predict what Philly will look like in even a year. The team could have as many as four first-round picks in the coming draft and the glut of top-tier talent in the frontcourt (along with Embiid, Croatian forward Dario Saric is lurking overseas) would seem to necessitate the kind of roster upheaval that Hinkie’s critics find so morally and strategically intolerable. Whether Okafor turns out to be a foundational piece for the Sixers or a trade chip in a blockbuster deal, much will rely on his ability to buck the league’s offensive trend-hopping and establish himself as the kind of throwback post presence that even modernists will love.

‘Jalen and Jacoby’: Tristan Thompson on His Contract Negotiations, the Pressures of the New Deal, and More