Yes, Novak Djokovic Wore a Darth Vader Mask on the Court for Halloween 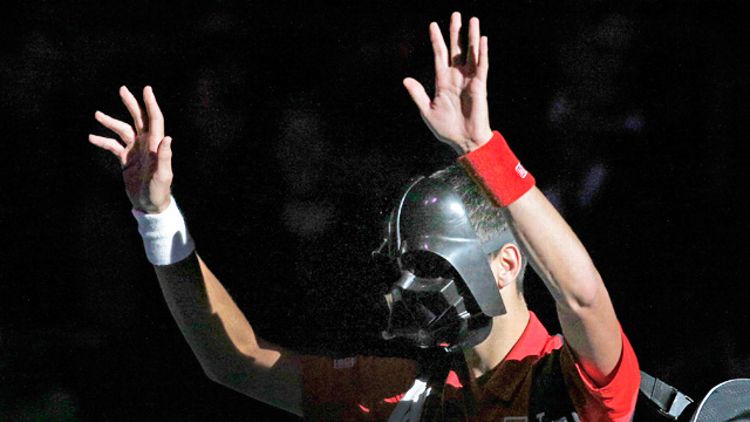 Wednesday was Halloween in Paris, too. And one reason to love Paris is that it’s the sort of city where it’s often hard to know whether it’s October 31 or the start of Fashion Week. This is worth mentioning because something happened on Wednesday, in Paris, and it was so delightful, gratuitous, weird, and apt that to witness it really was to kind of WTF-ly spit out your Gummy Eyeball Martini.

This week, you see, is also the BNP Paribas Masters tennis tournament — the Paris Masters. Typically, the action unfolds at the Palais Omnisports de Paris Bercy, a sports and music fortress in the 12th arrondissement right next to the Seine. But for a few magical minutes Wednesday evening, the Paris Masters was taking place on the Death Star. What transpired during those minutes wasn’t part of some kind of public-relations rollout on behalf of Disney, which owns Grantland and had just bought Lucasfilm for $4 billion. It wasn’t even any kind of art prank. It was merely the current no. 2 player in the world heading to the packed court in a Darth Vader mask.

Yes, Novak Djokovic wore candy-apple red for shorts and a shirt and, atop his head, Dark-Lord-of-the-Sith black. Who had he come dressed as? Half of Daft Punk? A living Banksy? Maybe. But the costume seemed redundant to me. Djokovic had gone as his old self. Before becoming the no. 1 player in the world last year, he was kind of the Darth Vader of men’s tennis, this moody, petulant Serb who wanted total domination but had to settle for partial. He liked the dark side, he liked mocking Rafael Nadal and toying with Roger Federer. With Sergio Tacchini as his sponsor, Djokovic rose to the top of the sport in amusing black outfits. Every time he took out Federer, Nadal, or Andy Murray in a semifinal or final, you could feel the world disliking him a little more. (A year ago he arrived for a match against Belgium’s Xavier Malisse wearing a Joker mask, an homage to one of Djokovic’s nicknames.) As a vanquisher, Djokovic actually became more gracious and self-deprecating. He just never seemed likable. He looked like someone you’d like to dislike.

His current sponsor, Uniqlo, has added fabric softener. The colors have been happy and huggable. The mask, though — that said “I really miss the old me.” So he indulged himself. But here’s the thing about a Darth Vader mask worn without the cape and the boots and everything else: Even on Halloween, you look faintly homicidal. The whole Darth Vader getup has a grim majesty — evil but chic. George Lucas was thinking about the Nazis for the movies’ Empire, and whenever a Vader mask or helmet is worn on its own, it feels like a mass-exterminator’s warning. Its wearer is hiding his face, on the one hand, and ensuring that he can breathe while hell breaks loose on the other.

The whole thing lasted only a few minutes on Wednesday. The mask was gone during the warm-up and the match. But it made an impression, anyway, one that put Djokovic’s opponent — Sam Querrey, a rangy, impassive Californian — in the weird position of having to play a role, too. He’d never beaten Djokovic, and when he failed to win a game in the first set, it looked as if the night would end the way their previous meetings had. But a sluggish-looking Djokovic was playing like the old him, too. Querrey won the second set in a tiebreak, then the match. An accidental Luke Skywalker defeated an intentional Darth Vader, sending the Empire home to Monte Carlo.