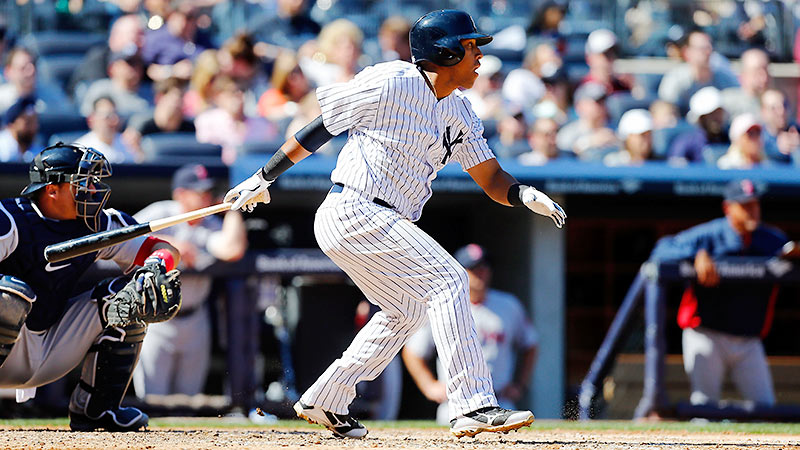 Who’s That Guy is an ongoing Grantland series, and an orientation tool to use in the vast sports landscape. And hey, baseball is part of that landscape!

Who Is He? New York Yankees infielder Yangervis Solarte

Where Is He From? Valencia, Carabobo, Venezuela

Wait, Is It Even Possible to Set Aside My Contempt for the Yankees and Enjoy His Success? It won’t be easy, since the list of reasons to hate the Yankees is as long as it is righteous. This year alone, we’ve got Derek Jeter’s vomit-inducing farewell tour, Michael Pineda’s gooped-up right hand, and, of course, the club’s enormous payroll and corresponding perch atop the AL East. Amazingly, however, Solarte’s pinstripes don’t totally negate the feel-good aspects of his story, of which there are many. Think of him as a rose growing in concrete, a redeeming blip of humanity on a roster full of joyless baseball gargoyles.

His Game, in Four Words or Fewer: BALLS TO THE WALL!

The Yankees already were down three injured players and had no healthy bench players when Solarte was tagged in the groin area by Mike Napoli in the sixth inning on a bang-bang play at first base.

Solarte went down in pain. At first it appeared he had turned an ankle. But when the true nature of his injury was revealed, the rookie got (snickering) sympathy from his teammates.

He also got instructions to stay in the game if at all possible. The Yankees already had Carlos Beltran playing first base for the first time in his long career, and they couldn’t afford to lose another body.

In the top of the seventh, Solarte walked out to second base. Slowly. And he finished the Yankees’ 3-2 victory over the Red Sox.

Follow the Bouncing Ball: Beloit, Wisconsin; New Britain, Connecticut; Round Rock, Texas — these are just some of the places Solarte spent his late teens and early twenties while playing minor league ball for eight resolutely unglamorous seasons. Following stints in the Twins and Rangers organizations, he became a free agent heading into 2014 and inked a deal with the Yankees, who valued his positional flexibility and switch-hitting. Solarte showed up to spring training as a non-roster invitee and left as the team’s top utility infielder, beating out the likes of Eduardo Nunez and Scott Sizemore. Injuries forced Solarte into action almost immediately, on April 2, and he’s remained a lineup regular since, batting .373 with seven doubles and team-leading .448 OBP. He’s like the Yankees’ Rudy, except with less stock fraud and more athleticism.

Social Media Presence? While you’ll need a Spanish-English dictionary to appreciate most of his Twitter musings, @Solarte26’s steady stream of bathroom-mirror selfies are worth the price of admission.

Solarte posted this on June 25, 2013, in case you’re wondering when normcore was born.

Also, Solarte counts among his followers none other than Juan Pablo Galavis, a.k.a. The Bachelor, a.k.a. the reason your mom was in a constant state of rage from January through March. I can’t imagine a better person to DM after a particularly demoralizing loss. “Bad night at the office, Juan Pablo — I struck out three times, flubbed a routine grounder, and tore my gluteus jogging back to the dugout.”

Fun Fact: The name “Yangervis” fuses Solarte’s mom’s first name, Yanmili, with his father’s, Gervis. I can’t decide where this ranks on the creativity scale; it’s definitely unique, but it’s also a bit of a cop-out. Regardless, eternal thanks to my parents for not employing this naming method, in which case I would’ve been “Denavid Borcas” (Denise + David).

From a culinary standpoint, I’m firmly pro-chicken. From a musical one, though? “El Pollo” has its issues, namely that it’s A LOVE SONG ABOUT POULTRY. Silver lining: Solarte’s protein intake is probably very solid! Nutritionists are for losers.

But Can He Play Defense? Funny you ask, as Solarte started one of the more impressive 5-4-3 triple plays you’ll ever see just last night. Dude’s got a PhD in Web Gemology. And unlike the Yankees’ former third baseman, Solarte’s thesis adviser wasn’t Tony Bosch (as far as we know). 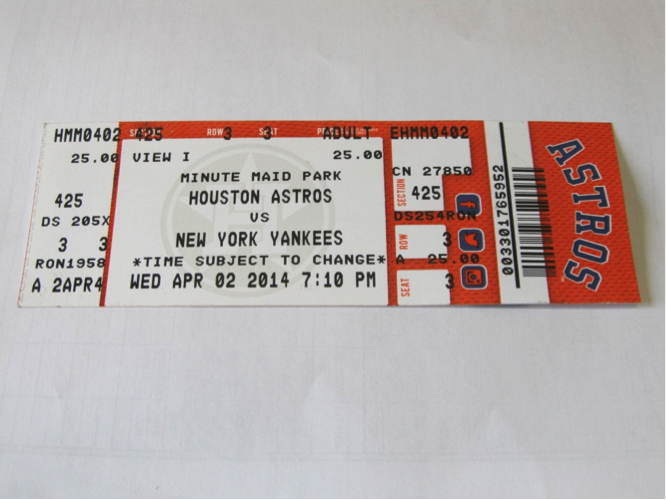 “No creases, rips, tears or dings on this ticket stub from Yangervis Solarte’s MLB debut,” boasts seller 11wayne, he of the 100 percent positive feedback rating and rad Centipede poster collection. This ticket could be yours for a mere $7.99 — $17.01 below face value! — because 11wayne is cool enough to let shipping slide when it comes to worthless pieces of cardboard. Best-case scenario: Solarte realizes his potential and you flip this to Rick from Pawn Stars for $40. The more likely scenario: You become the first person to purchase a Houston Astros–themed bookmark on eBay.

Should We Know Him? We should, especially since the Yankees’ infield is made of peanut brittle. Per Newsday, manager Joe Girardi is committed to “keep running him out there,” and considering Solarte’s run-producing, error-free ways and relatively dependable health, Girardi may not have a choice.

NHL Grab Bag: Brian Burke Made a Joke on Twitter and It Was Funny. We Wanted to Tweet 'Ha-ha' at Him But We Didn't.