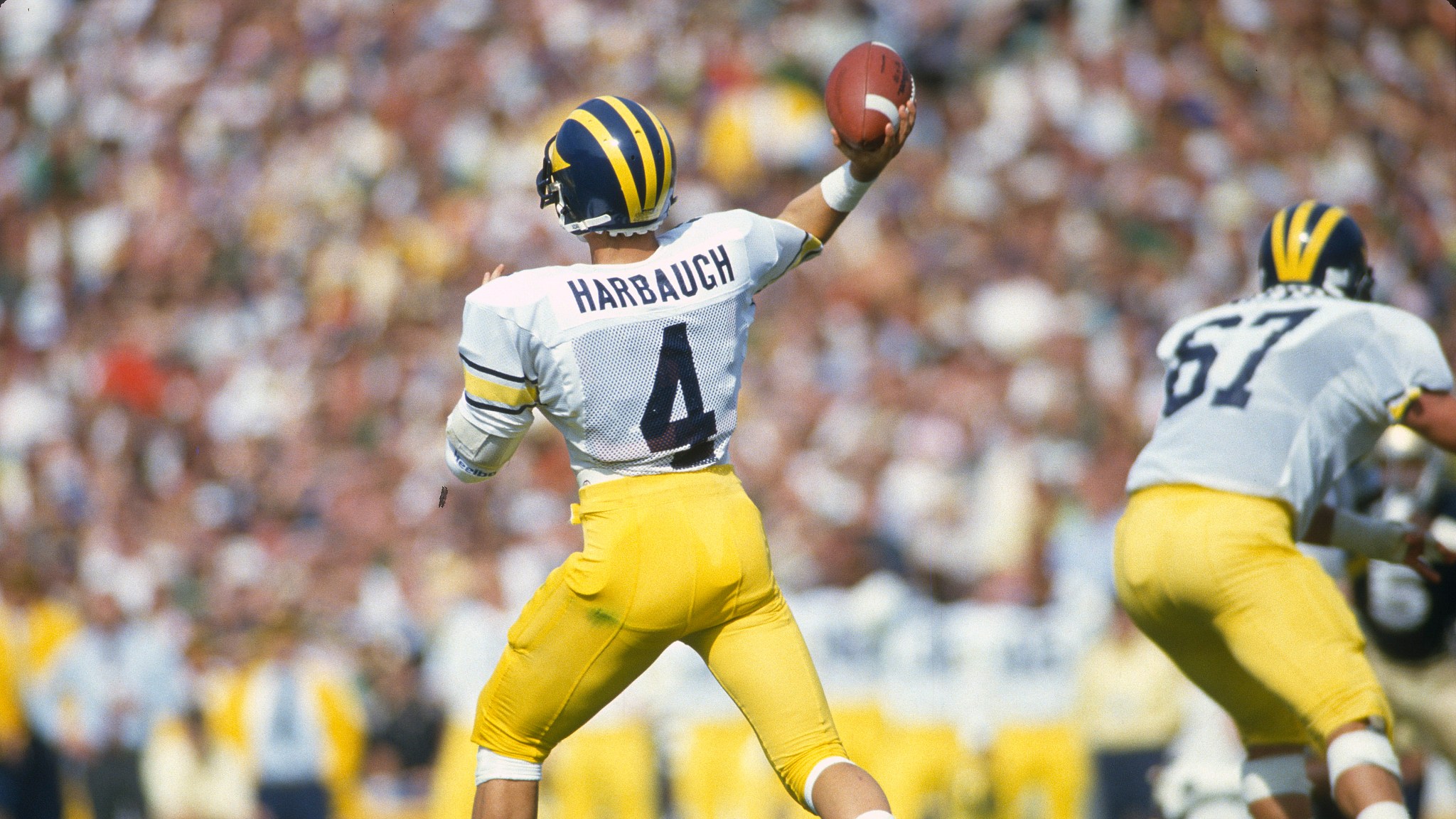 Intriguing matchups abound in Sunday’s clash between the 3-0 Eagles and 1-2 49ers: Philadelphia’s bipolar backfield vs. San Francisco’s undermanned front seven; Cary Williams vs. Bruce Miller II; Frank Gore vs. his feelings; and, most of all, Chip Kelly vs. Jim Harbaugh. The pair of former Pac-12 North rivals faced off twice in the college ranks, with Stanford’s Harbaugh winning in 2009 and Oregon’s Kelly returning the favor in 2010. They’ve since gone on to succeed in the NFL, college coach stereotypes be damned. This is their first professional meeting, so naturally there’s been a fair amount of hype surrounding the reunion. But what if it’s also their last?

Let’s backtrack for a moment. On Saturday, Michigan fell, 26-10, to Utah in a literal and figurative deluge, leading pretty much everyone to believe that Wolverines coach Brady Hoke is a dead man walking. Speculation on his replacement has already begun, and wouldn’t you know it, Harbaugh’s name tops every list. Of course, the university would hire the officially licensed Michigan Man in a heartbeat. But would Harbaugh actually consider a move to Ann Arbor? 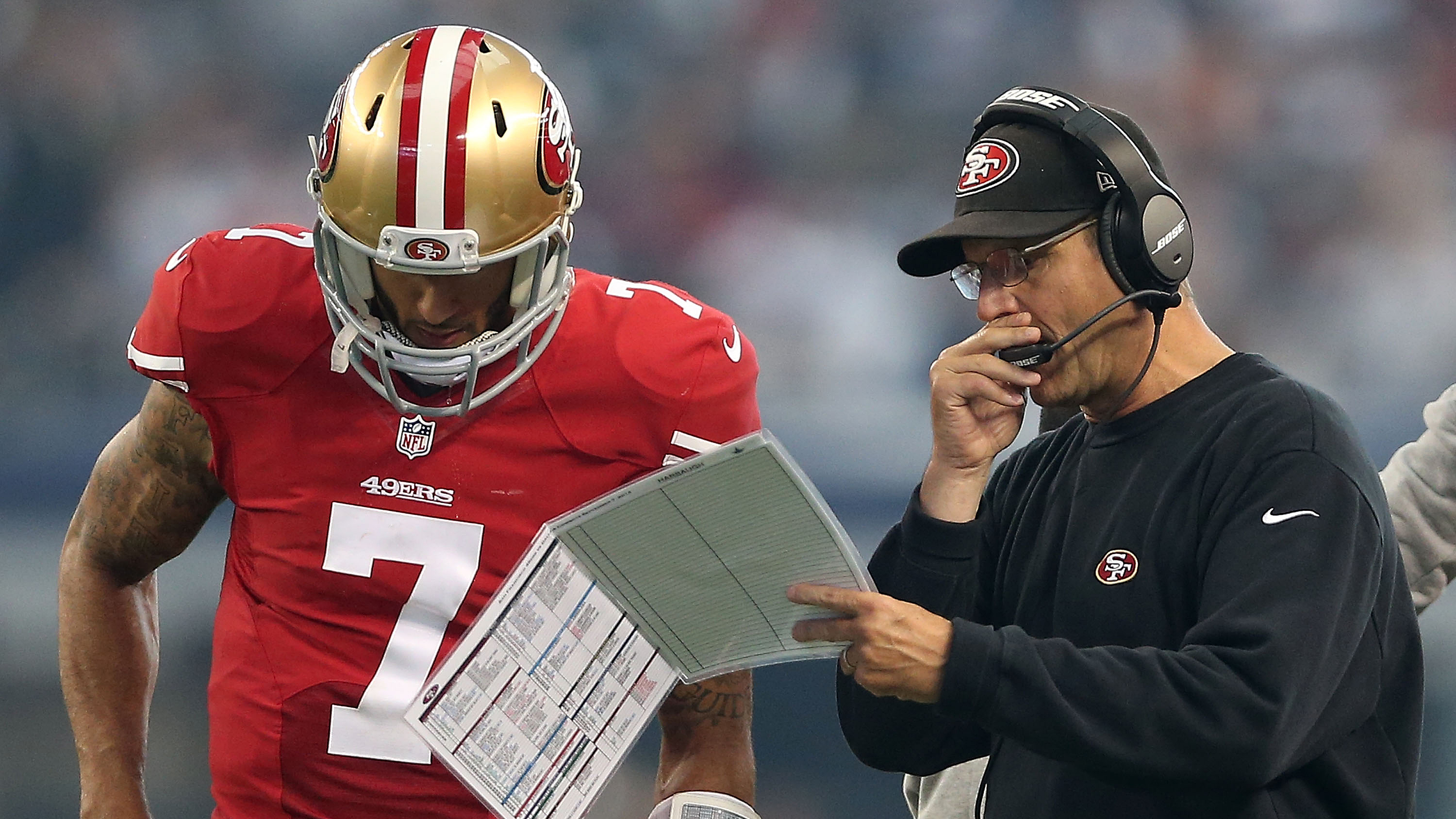 A perfect storm of factors is pointing him in that direction. Before we put on our tinfoil hat, it’s worth remembering something that cannot be disputed: Harbaugh nearly became the Browns coach in January. As Mike Florio first reported, a trade sending Harbaugh to Cleveland for several draft picks “was in place,” likely due to the mounting tension between the coach and 49ers GM Trent Baalke. Even stranger, it was Harbaugh who reportedly initiated the talks. He was seemingly willing to leave an outwardly attractive situation for an ostensible Dumpster fire. The deal never came to fruition, but the mere fact that it reached a “serious stage” suggests the clock is ticking on Harbaugh’s time in San Francisco, especially considering his contract expires after next season.

In addition to the apparent Harbaugh-Baalke power struggle, the 49ers may be in the midst of an honest-to-goodness slump. Colin Kaepernick looks average, the defense has taken a major step back, the team is riddled with injuries, and it’s going to be damn near impossible to make the playoffs in the same division as Arizona and Seattle. As such, the prospect of Harbaugh bolting for another job seems infinitely more plausible than it would have a year ago, when the 49ers were coming off a Super Bowl appearance and approaching juggernaut status. Now they’re 1-2 and literally can’t score in the second half.

Harbaugh, it should be noted, is no Steve Spurrier or Bobby Petrino — which is to say, he’s not the typical NFL coach who longs to return to college. Those guys missed the fun of campus life and longed for a reduced workload. Harbaugh could not give less of a shit about having fun, and he seems biologically incapable of rest. For him, the allure of college football is total control, just as it was with Nick Saban. He’s the kind of guy who gets super jealous every time Charlie Strong kicks a player off his team.

Conveniently, Michigan is in no position to play hardball. Harbaugh could easily obtain all the power he wants in his contract “negotiation,” plus an FBS-leading salary and an endless supply of pleated khakis. When the winningest program in college football history is giving away $150 tickets for $3 worth of Coke, certain sacrifices need to be made, one of which is not following up the hires of Rich Rodriguez and Hoke with, say, Cam Cameron.

So what’s the holdup? Well, Harbaugh’s competiveness knows no bounds, and I’m not sure he could throw up the deuces to the NFL without first winning a Super Bowl. While any reasonable examination of his tenure in San Francisco would yield immensely favorable results, he still might require a championship ring to achieve closure — especially since his brother, John, and his sworn enemy, Pete Carroll, both have managed to win one.

Also, wouldn’t he eventually get bored in the Big Ten? To reiterate, Harbaugh thrives off competition, and a schedule replete with the likes of Rutgers, Illinois, and Purdue may not pose enough of a challenge for him. I mean, I could see him constructing purposely unsound game plans just to keep things interesting. (In all likelihood, they’d be used against Kirk Ferentz.) (CORRECTION: They’d definitely be used against Kirk Ferentz.)

Then again, maybe he’d embrace the Big Ten’s inadequacy. After all, Michigan would be much, much easier to resurrect if it were in the SEC or Pac-12; perhaps only a select few coaches are cut out for modern Big Ten football. As with pleats, it’s all a matter of perspective.