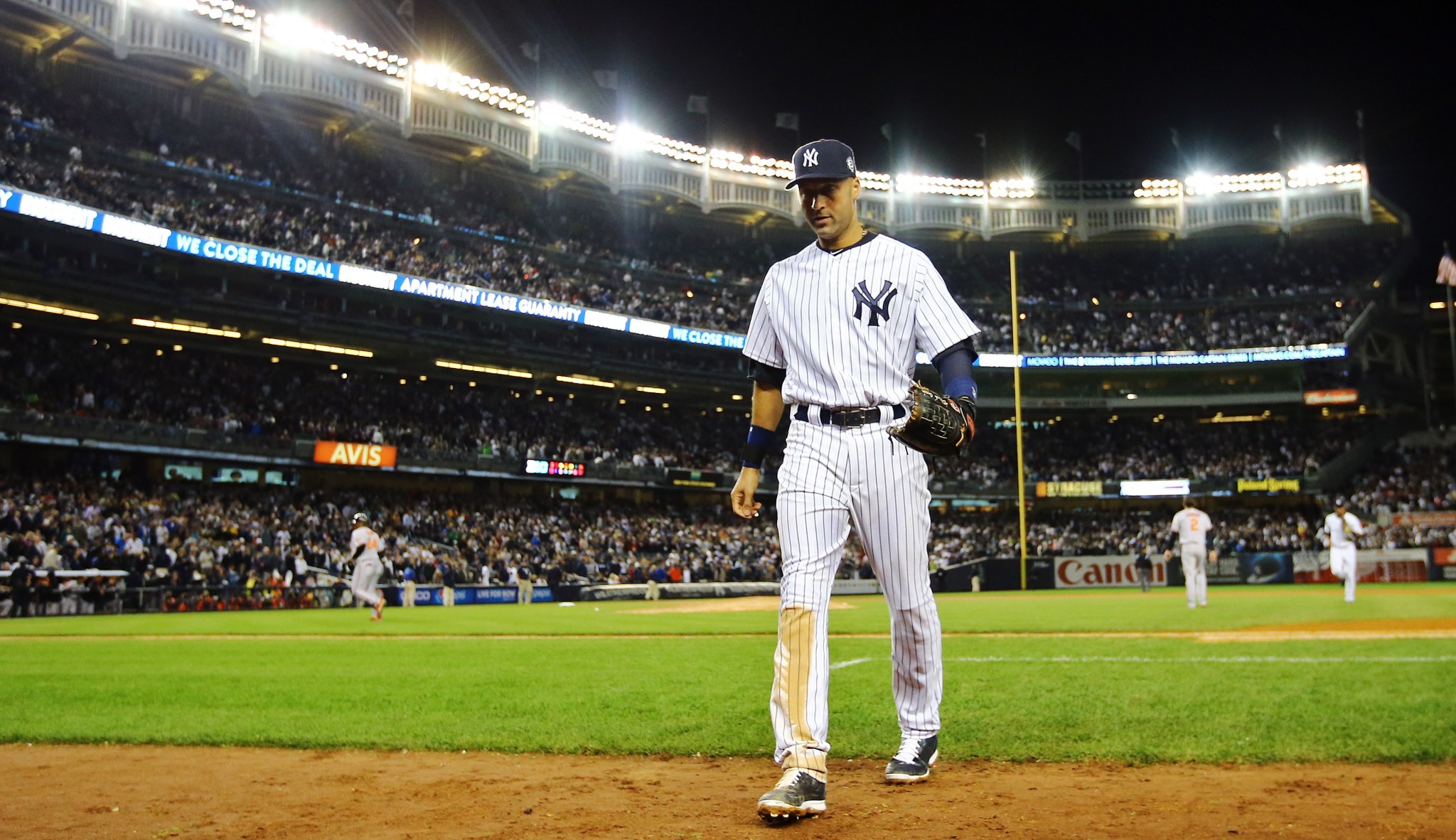 We begin with Derek Jeter, because this has been bugging me. I never liked Jeter. Mostly because he was really good for a Yankees team that was dominant for the better part of my childhood, but there was something else. Something about Jeter made announcers embarrass themselves. Like it was reflex, that no matter what Jeter did, they had to marvel at it on national TV, and turn him into a symbol of What The Game’s All About. He was baseball’s answer to Brett Favre. It’s why my favorite monument to Jeter’s legacy will always be his Onion archive.

But then something happened over the past few weeks. The Jeter backlash on the Internet became so inescapable that I actually started to like Derek Jeter. Or at least appreciate him.

The commercials from Nike and Gatorade helped, but the nostalgia got real only when I saw so many people telling me not to be nostalgic. This Keith Olbermann segment did that job better than anyone, I think. And that segment exists only because there’s a whole audience of people who were just dying to hear someone tell the TRUTH about what Jeter really was.

I don’t know. Derek Jeter may have been overrated if you want to get pedantic about how many Gold Gloves he really deserved, or where he sits in the Hall of Great Yankees or whatever. But no matter how overrated you think he was, everyone has to admit he was still really, really good. Like historically good, with a knack for coming up huge in big moments, and more success than most athletes could ever dream about.

I say this as someone who rooted against him for at least a decade, watched him come up with clutch plays constantly, and hated almost every single one. That stupid flip across the plate against the A’s in 2001 still pisses me off.

But just because I never loved Jeter, I’m not going to sit here and try to tell you he was never great. And it seems like that’s what a lot of people have been doing for the past few weeks. People see this guy who everyone’s celebrating, and they feel the need to take him down a peg.

It all seems pretty pointless. The farewell tour definitely got a little out of control, but I don’t think most rational people ever thought he was that perfect. He was always just a great player on a great team who led a stupidly charmed life. Now that he’s leaving, I can’t really blame anyone for making a big deal out of it.

Anyway, all of this is to say it was pretty great to see Jeter come up with an ending last night that was impossible to hate. A walk-off hit in a packed Yankee Stadium, and exactly the kind of obnoxious dribbler into right field that would’ve driven me insane when I was in high school.

I don’t know or care enough about baseball’s stats revolution to have an opinion on what Derek Jeter’s real value was, but while watching all the tributes this week, I saw highlights from a lot of games that made me think, Oh yeah, that’s back when I loved baseball. I think that’s what I was nostalgic for. When Jeter was in his prime, not every superstar had to be debunked with advanced stats, or takedowns, or carefully workshopped tweets about what a joke this all is. It was just easier to have fun with all this. With baseball specifically, but also sports in general.

There are pluses and minuses to being a sports fan today, but one big minus is that people feel the need to use all these new tools to mock people for enjoying certain athletes. I do this all the time, obviously. I probably did it with Jeter up until this week. But still. It can suck the fun out of things sometimes.

There’s this smug attitude that infects the way we talk about sports, where you’re either clued in enough to know Derek Jeter was overrated, or you’re one of the pathetic people who actually thought he was great. There was no shortage of that perspective with Jeter this week, and it all started to blend together, and it was the worst.

That ending last night was the best. That was a reminder that even with all the noise, sports are great regardless. Because there will always be moments that render all our arguments irrelevant, when everyone’s just dumbfounded that this is real life, and that’s really how it worked out. From start to finish, Derek Jeter’s career was full of those moments. His whole career was one of those moments, if we’re being honest.

I never liked him, I won’t really miss him, but goddammit, even after this ridiculous farewell tour, I have to #RE2PECT him.

As for the rest of the sports this week … we’ll keep this quick.

BEST: Dan Snyder ruins everything he touches. You knew this, but it never hurts to get a reminder. This week, we got South Park making full use of the Redskins’ canceled trademark registration and turning the entire franchise into a joke for 30 minutes. One night later, the Skins went out and got destroyed on national television by the Giants. After six weeks of 75 percent of Skins fans calling for Kirk Cousins, last night (four interceptions!) everyone remembered why Kirk Cousins was never that great of an idea. Now everyone’s back to waiting for RG3.

For all the focus on the QB controversy here, there’s always a chance that both quarterbacks are painfully mediocre. We’ll see. This would be sad, but watching the Redskins fall apart sorta restores my faith in the universe. Dan Snyder deserves nothing less than perpetual failure, and that’s what he always gets. He’s cursed this team forever.

BEST: Darnell Dockett. It’s time to start a petition to have Darnell Dockett replace Phil Simms on these Thursday-night games. If the football’s going to be awful every week, we might as well mix things up.

Them Mannings got so much damn money…. ESP mailbox head..

BEST: Baseball celebrations. It’s hard to say who wins between Andrew McCutchen’s cigar photo-bombing, Tony Montana’s double-beer shower, or Yasiel Puig opening two beers with his mouth and then spraying the whole locker room. Regardless, it’s impossible to watch a baseball team celebrate and not walk away a little happier. I wish baseball teams celebrated every win like this. It worked for the ’86 Mets.

WORST: Jameis. I’m sure we’ll talk more about Jameis as the year unfolds, but every time his lawyer releases a statement, it becomes a little harder to watch him dominate without feeling a little bit disgusted. The rest of the college football season would’ve been so much simpler if Clemson hadn’t Clemson’d things up at the end on Saturday.

WORST: Revisionist history at Michigan. The Michigan football program hit a new low with that loss to Utah last weekend. Nothing captures the state of the program better than this GIF. Now we have various smart people popping up to imply Michigan got rid Rich Rodriguez too early, and that’s where we have to draw the line. It’s one thing to make fun of Michigan, but I watched those RichRod teams. They went 6-18 in the Big Ten. His final year, they were 3-5 in the league and tied for seventh place. Michigan has lots of problems, but moving on from RichRod was not one of them. Now? I just can’t wait to see how much money they try to pay Jim Harbaugh this summer. The signing bonus alone could bankrupt the entire school.

BEST: The new Golden State arena. The new design looks like a toilet. 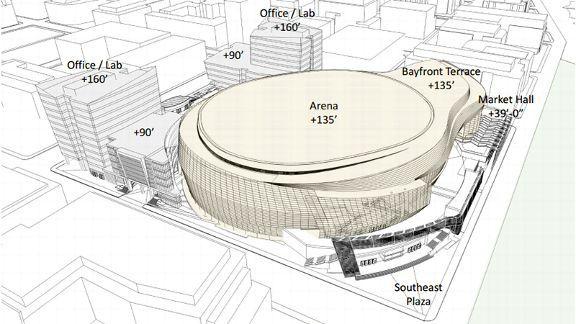 It looks so much like a toilet that the team had to release a statement clarifying that it’s not supposed to look like a toilet:

The Golden State Warriors want their fans to know that their team won’t be playing in an arena soon to be known as the “The Bowl.”

Renderings from Manica Architecture, the lead designer of the Warriors’ new arena, presented Thursday at the local citizens advisory committee went viral and made national news earlier this week after a San Francisco real estate blog called attention to the fact that it looked like a giant toilet bowl.

“This was presented at the meeting as very much a work in progress so that we could put the size of the building in context,” Warriors spokesman P.J. Johnston told ESPN.com. “In the next few months, we will continue to show much more and the arena design will continue to be refined.”

This was easily my favorite story of the week.

BEST: Steve Ballmer is going to be so much fun. Not only did we get rid of evil Donald Sterling, but we traded him for a guy who just might be the craziest NBA owner this side of Paul Allen.

His zeal for dying technology — bring back the Zune! — is just the beginning. Go back and watch all these videos. That’s a crazy person; the only question is how long it takes for him to prove it in the NBA.

BEST: Laws of the Universe. Before no. 11 UCLA took on no. 15 Arizona State Thursday night, I tweeted: “I’ve lost money betting on UCLA 2 of 3 weeks this year, gave up on them forever. So yeah, they’ll probably go dominate tonight.” Final score: UCLA 62, Arizona State 27. The world is full of unfairness, but at least it’s predictable.

Arians said team won't let success go to its head. Says it realizes "it's a short elevator ride to the shithouse"

Deebo is back. There goes the neighborhood. pic.twitter.com/Ftnch8SUYy

Have a good weekend, and watch out for James Harrison.