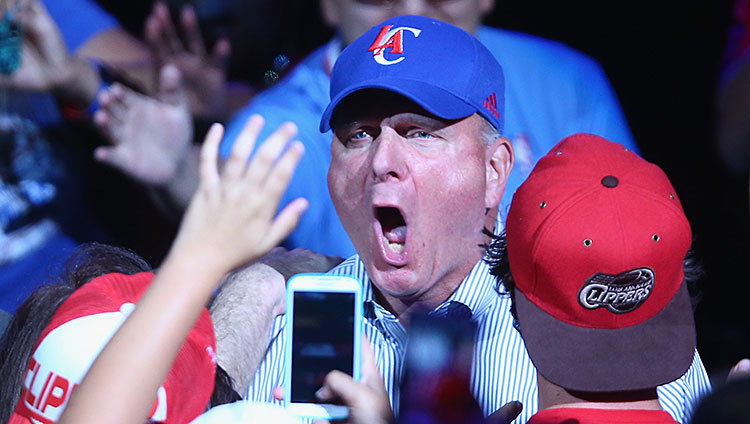 The Clippers Fan Fest, held on Monday, was as much a celebration of Steve Ballmer’s purchase of the team (for the paltry sum of $2 billion) as it was an exorcism of the retrograde tightwad Los Angeles plantation regime of Donald Sterling. Shelly Sterling will retain some perks as well as the honorary titles of Clippers No. 1 Fan and Owner Emeritus, but such is the price of expedience.

Introduced by head coach Doc Rivers to the tune of Eminem’s “Lose Yourself,” Ballmer charged out onto theStaples Center floor like it was the cobblestoned streets of Pamplona, and thus began the most entertaining team owner introduction in NBA history.

It kicked off just as one would expect a pep rally involving the former Microsoft CEO to unfold. Ballmer was clapping with the fury of 10,000 demons, unleashing palm-numbing high fives and awkward bro-hugs on stunned onlookers, beseeching the crowd to get up by swinging both fists toward the arena ceiling, unleashing Henry Rollins–esque screams of Netscape-immolating fury, and just generally acting like a guy who had, only moments earlier, injected the purest liquid cocaine, Dr. Thackery–style, directly into his own penis and then DDT’d John Cena on Monday-night Raw.

Once Ballmer got onstage, he took the mic and launched into his now-patented unintentional Chris Farley impression. He led the arena in a “I love Larry” chant, an allusion to the Larry O’Brien trophy, a reference that seemed to escape most of the crowd, who were way too excited to care. And who can blame them? He then promised that the team, under his stewardship, would be “hard-core,” and that they would keep “coming and coming and coming and coming and coming,” at which point he christened the team “The Hard-Core Clippers,” name-dropped Colin Powell, and swore that all obstacles would be overcome by unbridled optimism, while cameras caught CP3 appearing relieved that Steve Ballmer had stopped screaming the word “coming.” Then he gave out his email: sballmer@clippers.com, for those interested.

It was an incredible and life-affirming display, and one that Ballmer has been working up to for most of his professional life. This is what Steve Ballmer does. He goes nuts in that singular way that only a person with quadruple middle finger fuck-you money can.

This is the original, the Ballmer gold standard. Filmed at a Microsoft event from the early 2000s (the date and purpose of which have faded into the shadow of the so-called “Monkey Dance”), this clip features an obviously out-of-his-mind Steve Ballmer jerking around the stage in slacks and a blue button-down shirt like a ghoul summoned from the brimstone, as Gloria Estefan’s “Get on Your Feet” salsas cheerfully in the background. It’s all here. The exuberance, the gallons of armpit sweat, the bellicose roar, the moment you thought he might pass out. A pre-YouTube peer-to-peer-sharing video classic.

Here are some more of Ballmer’s greatest hits.

While giving a talk at a university in Budapest, Hungary, in 2008, Ballmer asked the audience how many of them still had exams to take, at which point a protester stood up, accused Microsoft of stealing Hungarian tax dollars, hurled two eggs in the direction of the then-Microsoft CEO, then left. Ballmer emerged from his foxhole behind the podium, quipped, “It was a friendly discussion,” then proceeded as if nothing had occurred. Steve Ballmer: hard-core.

Steve Ballmer and Bill Gates shattering the Cauacasity meter with a parody of SNL’s “Roxbury Guys” sketch. It’s the most memorable of several Microsoft parody videos that helped build the company’s reputation as a world leader in topical satire.

In 2004, senior Microsoft engineer Mark Lucovsky told Steve Ballmer that he was leaving the company for Google. Ballmer responded by going full Bobby Knight and declaring (according to Lucovsky, via court documents), “I’m going to fucking kill Google.” Google is now the no. 1 brand in the world.

Finally, Ballmer’s heart-on-his-sleeve farewell speech to Microsoft employees. Every breakup has its song. Thus spake Ballmer about his breakup song: “This is a song that comes at the very end of a movie. When one of the actors gets up onstage and talks about kinda how he likes to do things. Well, I want to end with this song. Respectful. A song that talks about what you’ve meant to me, and what you’ve done for me. You’ve made this … the time of my life.” Freaking nailed it.