With Plenty of Depth, This Tribe’s on a Quest 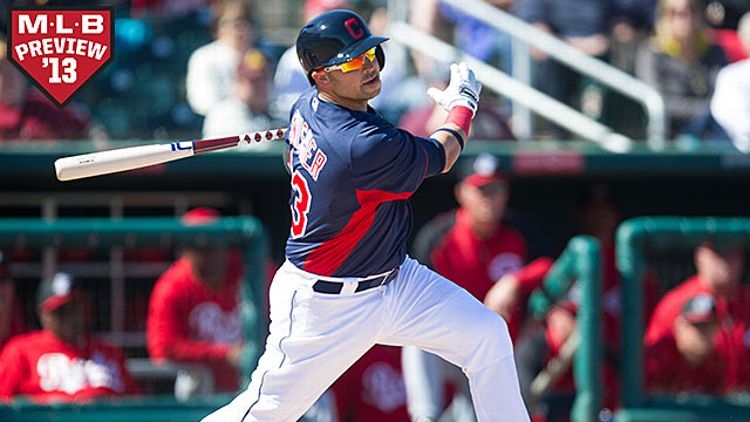 You could say that the Cleveland Indians are a couple of months too late on the “Harlem Shake” craze. That doesn’t make the sight of a major league manager complaining that his bonnet is crooked any less funny. Nor does it change the reality of the team’s offseason. By coming in with a late offer, the Tribe snagged one of the winter’s best available free agents. In doing so, they rounded what’s suddenly one of the most intriguing rosters in the game.

We talked about the upside of Cleveland’s late Michael Bourn signing a month ago. Since then, the Indians’ lineup plans appear to have crystallized. On most nights, Bourn will be flanked by Michael Brantley and Drew Stubbs, giving the Indians one of the best defensive outfields in baseball, and the only one with three center fielders starting in the same outfield on Opening Day.

This is particularly relevant, given how the Indians fared defensively last year: the worst in baseball. General manager Chris Antonetti says he expects the new outfield trio to help remedy last year’s woes, with an assist from Swisher playing first instead of the outfield and Jason Kipnis adding experience to his modest 188 career games played and improving on the spot. The starting rotation will have a different look, too, sans the historically ground-ball-heavy foursome of Justin Masterson, Ubaldo Jimenez, Derek Lowe, and Fausto Carmona. But while a pitcher with a more neutral ground-ball/fly-ball split like Zach McAllister will likely result in more balls hit to the trio of outfield vacuum cleaners, both Antonetti and Francona say they don’t expect and don’t want pitchers like Masterson to groove a bunch of high four-seam fastballs for the sake of scientific research.

The more tantalizing possibilities center on some potential roster manipulation that would make Earl Weaver and Casey Stengel proud. When you see advanced projection systems pegging the Indians for 80 wins, that assumes some non-specific playing-time predictions that assume pockets of playing time in multiple situations. But if Francona can look for any and all opportunities to gain small edges, the end result for the team may well be a record that’s a game or three better than you might expect. The Tribe signed Giambi and Ryan Raburn to minor league deals this winter, adding a lefty and righty slugger, respectively. Stubbs is a lifetime .276/.344/.476 hitter vs. left-handed pitching, and just .228/.301/.355 vs. righties, making him a debatable choice as an everyday right fielder, even accounting for his great glove and excellent speed. One potential scenario, then, would be a semi-platoon, with Giambi starting against some righties at DH, Mark Reynolds moving to first base, and Swisher to right field, while Stubbs takes a seat. On the other hand, Francona has maintained publicly that Stubbs is the clear starter in right, creating something of a push-pull situation while everything gets sorted out.

Meanwhile, if the Indians go north with Raburn, they’ll be getting a player who hit a combined 29 home runs over a little more than 800 plate appearances in 2010 and 2011, only to get a (brief) first crack at the starting second baseman’s job with the Tigers in 2012 and fail spectacularly. Cleveland’s surely taking Raburn’s spring power outburst with a giant block of salt, given the extremely small sample size in play. But after a year in which he hit a brutal .171/.226/.254, you take any tiny glimmer of optimism you can get; the 2010 and 2011 version of Raburn would be a great fit at second, third, and left field, where he’d offer a right-handed alternative to lefty-swinging incumbents at all three positions.

“One of our objectives going into the offseason was to have a more versatile and flexible roster,” Antonetti said in a chat with Grantland, while watching a B game being played on one of the Indians’ minor league fields. Antonetti noted that the talent level among Cleveland’s Double- and Triple-A position players could improve this year, but potentially not enough to provide the kind of depth the major league team wants. “So we sold Giambi and Raburn on the opportunity to come in and compete.”

Contingency plans abound. If Lonnie Chisenhall can’t hack it as a full-time big league third baseman, Cleveland’s trade for multi-positional infielder Mike Aviles could prove invaluable. If the Indians want to give Mark Reynolds (their first notable free-agent signing of the winter) time in the field as Francona has vowed, Carlos Santana could see time at DH, thereby giving one of the best power-hitting catchers in the game a chance to get closer to the near-everyday playing time he craves and the team should want from him. Lefty-swinging Ezequiel Carrera, another speedy fly-catcher in the Bourn and Brantley mold, could also spot for Stubbs against tough right-handers, or pinch-run for one of the few Indians who lack speed in this year’s projected lineup.

If anything, there’s a bit of Curse of Plenty potential here. Should everyone stay fairly healthy throughout the season, there will be players who’ll get short-changed on playing time, especially at first base and DH with Swisher and Reynolds ensconced, Santana wanting to do more than catch, and Giambi risking potential rust if he doesn’t get a decent number of reps. Still, Francona doesn’t see any of that as a problem.

“When you look at it right now, it looks a little clogged,” the Indians skipper said a few minutes after peeling off the baby costume. “But you get to May or June, by then things have a way of working themselves out.”

The hope is that much-improved defense, more options against lefty pitching, and better depth could help the Indians make a big-enough impact in both run scoring and run prevention that the team can overcome what again looks to be a mediocre group of starting pitchers. Cleveland starters finished 28th in MLB last year with a 5.25 ERA to go with an ugly 4.73 FIP. McAllister has got sleeper breakout potential, free-agent signee Brett Myers could offer much-needed bulk innings if not necessarily great ones, and hell, Francona’s even optimistic about Scott Kazmir, as the once-fireballing lefty tries to post his first semi-useful season in four years. Trevor Bauer has talent and upside to offer, though he’ll likely start the season in the minors, and thus be a non-factor in the big leagues for at least the first few weeks of the year. But the season by and large rides on the team’s two most talented starters. Masterson fired 216 innings with a 3.21 ERA and 3.28 FIP in 2011, making him worth nearly five Wins Above Replacement per FanGraphs. Ubaldo Jimenez was a Cy Young candidate and near seven-win pitcher three years ago, in Colorado no less.

Baseball’s best collection of outfield Hoovers should help the Indians improve a lot from last year’s brutal 68-94 record. If anything more interesting is going to unfold, that will depend on what happens when Indians opponents don’t send fly balls out to die.

Video: Jalen Rose on Being Hated in College, and Disrespecting Michigan State