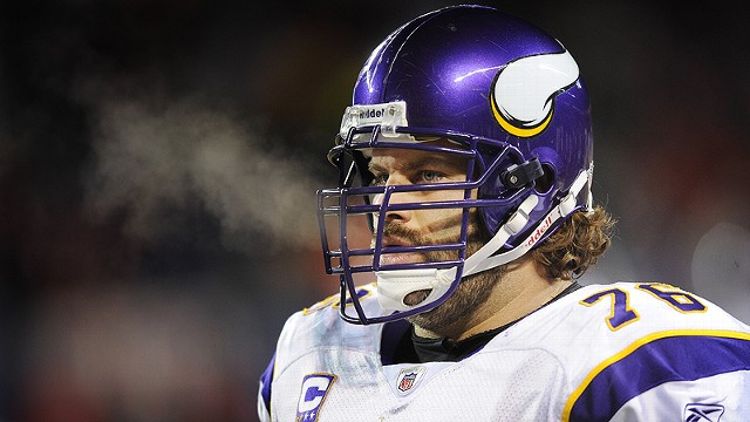 Lost amid all of yesterday’s free-agent chatter was the news that after 12 seasons, Steve Hutchinson’s NFL career is over. Ray Lewis and Tony Gonzalez were the names oft-mentioned this offseason when discussing all-time greats walking away from the game, but Hutchinson belongs in any conversation about the best players of the past 10 years. A seven-time All-Pro and a member of the NFL’s ’00s All-Decade Team, Hutchinson isn’t just one of the best guards of his era — he’s one of the best guards of all-time.

The timing of the announcement is fitting, mostly because of how Hutchinson fits into the thought process about how teams should be built. From his time in Seattle and Minnesota, Hutchinson represents a way of valuing interior line play that often goes overlooked but is rarely regretted. Likely filling Hutchinson’s role in Tennessee will be free-agent prize Andy Levitre, who owes at least part of his six-year, $46.8 million contract to Hutchinson.

Hutchinson’s last run of greatness was in Minnesota, where he got his own fat free-agent contract in 2006. At the time, he was so coveted that this seven-year, $49 million deal (with $16 million in guarantees) left only three tackles with a larger yearly salary. The deal is notable in how it created a new market value for interior linemen, but also in how it affected future negotiations of all kinds. Because Hutchinson was only given the transition tag — and not the franchise tag — by Seattle that offseason, the Seahawks had a right to match the offer, but the Vikings weren’t forced to provide any compensation if they didn’t. The problem for Seattle was that written into the contract was a “poison pill” provision stating that if Hutchinson wasn’t the highest-paid lineman on his team at any point during the contract, the entirety of his deal would be guaranteed. Since left tackle Walter Jones was already making a higher yearly figure, all $49 million would’ve become guaranteed the moment Seattle matched the deal. They didn’t, Hutchinson went to four more Pro Bowls, and the poison pill was removed from the latest CBA.

The more relevant transaction, though — as it relates to what’s currently happening in the NFL calendar — is how Hutchinson even ended up in Seattle. Hutchinson and Jones made up the best side of an offensive line in generations — they were a large part of Shaun Alexander averaging more than 1,500 yards a season in the duo’s first five years together — but that they ever teamed up at all speaks to the value of guards upon entering the NFL. The 2001 draft was a defining one for the Seahawks. In part because it had an extra first-round pick from the Joey Galloway trade the year before, Seattle was able to trade its 10th overall pick and its third-round pick to Green Bay for no. 17 overall and Matt Hasselbeck. That 17th pick turned out to be Steve Hutchinson.

In the months leading up to the draft, Hutchinson got the treatment that many guards have received in the past 10 years. The consensus was that Hutchinson was one of the safest picks in the draft — a can’t-miss prospect that was probably among the five best players available and a likely perennial Pro Bowler. In a late-March mock draft that year, Mel Kiper had Hutchinson going 11th to Carolina. When he fell to no. 17, Sports Illustrated’s Pat Kirwan wrote that Hutchinson was “an automatic 10-year starter.” How is it that a 10-year starter goes 17th overall? Well, that’s just how it works for guards.

Last season, David DeCastro was clearly the best guard available. Most projections had him going no later than 20th to Tennessee. The value, at that point, was just too much to pass up, especially considering draft evaluations like the one on NFL.com: “He could be one of the highest draft picks at the guard position in recent years, and he could easily go in the top 10.” He went 24th.

DeCastro suffered a gruesome knee injury in the preseason and didn’t see game action until much later, but Kevin Zeitler — the consensus no. 2 guard and the 27th overall pick by the Bengals — was a starter from day one. By season’s end, he’d put together one of the best years for any guard in football.

Success for highly drafted guards isn’t rare — at all. In the past 15 years, 13 guards have been selected in the first round (Danny Watkins, picked by the Eagles in 2011, is missing from this list, and Branden Albert is actually a tackle). Excluding DeCastro and Zeitler (who’ve only been in the league for a year), seven of the 11 have been to the Pro Bowl. Five have been more than once, and Mike Iupati, finishing up his third season, figures to be a fixture there as long as there is a Pro Bowl. That means that in that 15-year stretch, more than one-third of the time, a guard selected in the first round turned out to be a multiple Pro Bowler. The success rate for tackles, if you can imagine, isn’t quite as high.

This brings us around to next month’s NFL draft. Like last year, there are two consensus guards who will likely end up in the first round — North Carolina’s Jonathan Cooper and Alabama’s Chance Warmack. And like last year, each will probably go 10 picks later than he should. Warmack has been considered a top-five prospect since his final days at Alabama, and I’m not sure a lackluster run-40-yards-in-a-straight-line test does much to taint that. In any other year, Cooper would be the one described as the can’t-miss anchor. Still, there likely will be three to four tackles off the board before either one is selected. A good tackle still has more value, to be sure, but at some point, there should be a turn in how teams think of drafting guards. As more defenses look to isolate ends (hello, Aldon Smith) and penetrating tackles (what’s up, Geno Atkins) on interior linemen, excellent guard play has become more important than ever.

When some speculated that by franchising Albert, the Chiefs had made it clear they wouldn’t draft a tackle with the no. 1 overall pick, new general manager John Dorsey said the goal was to draft a future Hall of Fame player regardless of position. The idea of value-based drafting isn’t new, but putting it in those terms is. I wouldn’t suggest that Kansas City take a guard with the first overall pick, but if the goal is to draft players that will be consistently excellent for a long time, picking a guard is still undervalued. Finding Hall of Fame players isn’t easy, but of those 11 guards previously mentioned, two — Alan Faneca and Hutchinson — can book their tickets to Canton now. That’s not a bad batting average, and come late April, it’s one teams would do well not to forget.

With Plenty of Depth, This Tribe's on a Quest