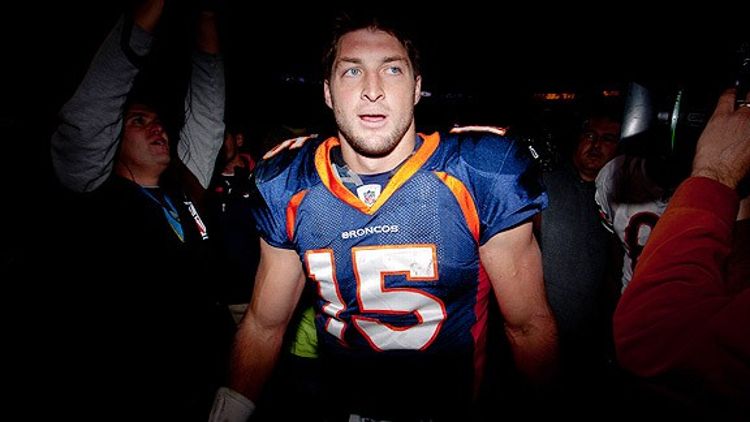 Lindsey Vonn says she’s “friends” with Denver quarterback Tim Tebow, and I’m a jerk for putting quotations around that word. I should just accept her explanation. She says she met Tebow at the ESPYs and they are friends, and friends do things like go to each other’s football games. Friends like Jessica Simpson and Tony Romo. (Internal monologue: No! Stop it, Wildes. She’s an honest skier who loves the USA. She loves it more than you do. I bet that’s why you don’t trust her. You’re jealous of her patriotism and aerodynamic USA unitards.)

In any event, the big winner here is Thomas Vonn. Let’s line up every single guy in the world and rank them from “My dreams and memories would both be simultaneously crushed” to “Eh, I actually wouldn’t mind if my ex-wife dated that guy.”

The line starts with Girls Gone Wild founder Joe Francis, peters out around your too-handsome-for-comfort UPS man, and ends with Steve Brady from Sex and the City. Nope, sorry, it ends with Tebow. Didn’t see him. He had briefly stepped away to make a sick child smile. He’s back now, and he’s apologizing for leaving the line. He wants me to have a good day. He hopes this blog post turns out well. He says he’ll read it if he gets a chance. He wants my number so we can hang out if he comes to Connecticut. He hopes my family is doing well. He’s got to run to a last-minute film session but he thinks it was great to meet me.

“Nuggets coach George Karl was asked which NBA player had traits similar to those that have allowed Tebow to achieve beyond his skills.

“With the will to win, Manu Ginobili is the type of guy. He has this exuberance of, ‘We’re going to win the (darn) game with effort, passion and commitment,’” Karl told reporters at his team’s media day interview session. “He’s the first guy that came to mind.”

When the comparison was pointed out on Twitter, Ginobili responded, “Is that good or bad?”

Solid question, Manu. I’m not sure if it’s good. Kind of like when you hit that bat.

Hey Brett. It’s me, The Media. Listen, I know we’re not even together right now so it sounds weird to even say this, but … I’ve met someone.

He’s the one. Oh man, I can’t believe I said that. Who knows — it’s way too early for that. Listen, I know we spent a lot of time together, and you’re still really important to me. I just wanted you to know that I think I’m officially moving on. It’s so crazy to hear myself saying that. Like I just didn’t want you to feel weird or anything if I don’t call you anymore. OK, hope everything is cool in Mississippi. Bye.