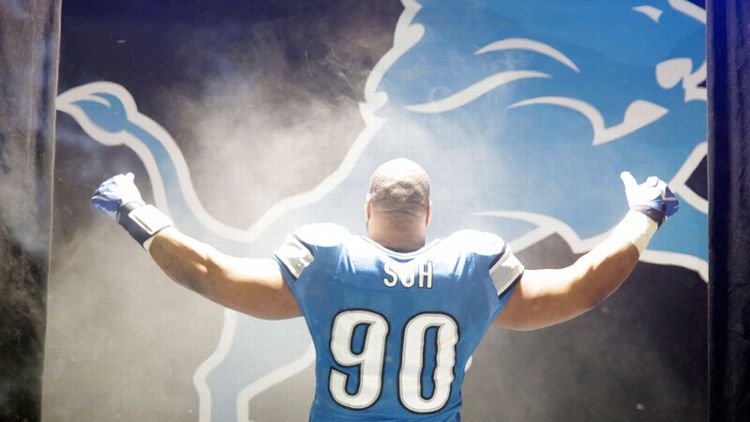 Arms
Ndamukong Suh was suspended for two games and will forfeit $165,000 for mushing Evan Dietrich-Smith’s head and stomping on his arm. Earlier this year, Vikings defensive end Brian Robison was fined $20,000 for kicking T.J. Lang in the groin.

We live in a crazy world beset with disagreements, strife, and war. But — until now — all human beings universally agreed that the arm is less valuable than the groin.

See a Volkswagen? Punch someone in the arm. The company would go bankrupt if it produced cars that, when spotted, warranted good-natured groin kicks from a buddy. A groin kick is so frowned upon that you’re not even allowed to do it while fighting. Every combat sport in the world starts with some version of this speech: “OK, I want to see a clean fight. Remember you’re allowed to snap his arm in half until the bone pops out, but I will not stand for any groin hits. In fact — even if it’s an accident, you’re getting a timeout. OK, take off your overly adorned outfit and let’s get it on!”

The Two-Sport Super Star
I won’t miss the NBA lockout, but I will miss talking about LeBron James playing football. Now that the lockout is over, the two-sport super star is dead again.

We were spoiled by Bo and Deion. They bounced from sport to sport, just like we did as 12-year-olds. (“Mom, these cross trainers are for when I play basketball AND football AND baseball. I need this Velcro strap for stabilization!”) They were super athletes and so were we.

At some point, we morphed from participants to spectators and the super athletes disappeared. Antonio Gates was just playing football. Joe Mauer was just playing baseball. The only multi-sport superstar left was Air Bud.

While the mainstream media never embraced Buddy, they did love Michael Phelps. He was so versatile! He was in different events on the same day! Just like Deion!

In my dream world, Phelps’ Ricky Rozay-esque collection of medals would have irked Team LeBron. T’was LeBron, not Phelps, who deserved to be called the Greatest Athlete in the World! To prove it, LeBron would embark on a lifetime endeavor to win as many Olympic medals as possible. If he really trained, how many could he win? I’m setting the over/under at 15.

Back in reality. LeBron’s got his one gold medal and he’ll spend the year chasing the Larry O’Brien Championship Trophy. Maybe he gets it. Maybe he doesn’t. Either way, it looks like my dreams of him holding the Lombardi Trophy are slipping away.

Honorable Mentions
Mimes, for unfairly having their art ripped in the media for the actions of non-certified mime Stevie Johnson … anyone caught in an invisible box … Blake Griffin’s first dunk victim who is just eating a sandwich right now thinking everything is cool …