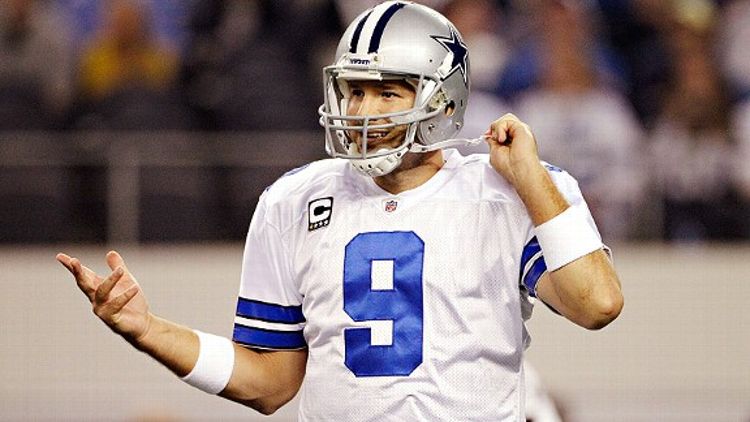 Cowboys (-7) over BUCCANEERS
I’m predicting a big pad-the-stats night for a suddenly frightened Tony Romo after Bill Barnwell started the “Peyton Manning to Dallas” bandwagon this week. Did you know Romo has a chance to end up with 4,500 yards, 35 TDs and 15 or less picks? How did this happen? Was there a 720-yard, nine touchdown game that I missed?

Dolphins (-1.5) over BILLS
Chan Gailey after a six-game losing streak in which his team got outscored by 117 points: “I don’t think we are good right now, but we can be respectable.” And Tony Sparano got fired? In other news, just when you thought the Bills’ season couldn’t be more depressing, we might have a “J.P. Losman’s revenge game” on our hands. No, seriously. It’s in play.

Packers (-14) over CHIEFS
(Opening an early Christmas gift.) “Wow! It’s the chance to bet against Romeo Crennel again! Thank you! You shouldn’t have! This is too much!”

Bengals (-3.5) over RAMS
Titans (-6.5) over COLTS
(Opening another Christmas gift.) “A free two-team parlay against Kellen Clemens and Dan Orlovsky when they’re both getting less than a touchdown? THANK YOU! Are you kidding me? I can’t believe you went so overboard for me!”

Seahawks (+3.5) over BEARS
CARDINALS (-6.5) over Browns
We’re headed for a Week 17 Seahawks-Cardinals showdown for the sixth playoff spot. Nobody believes me. I’m like the degenerate gambler who cried wolf.

Saints (-7) over VIKINGS
If Joe Webb was starting, I would have taken the Vikings even though Drew Brees has thrown for 4,368 yards, 32 touchdowns and 11 picks … and he’s going against a secondary that’s given up 3,505 yards, 26 touchdowns and six picks and one “Minnesota’s secondary is ignoring its own coaches” article. I mean, did you SEE Joe Webb last weekend? Would you rather give $59 million to Ryan Fitzpatrick or Joe Webb?

GIANTS (-7) over Redskins
I’m swinging the other way — this is such a textbook “How dare you thought we were going to cruise at home, watch us take a giant crap!” Giants game that I think the opposite happens.

TEXANS (-6) over Panthers
Like T.J. Yates (sorry, Schaub), love Houston’s running game (sorry, Carolina’s front-seven), love Houston’s pass defense (sorry, Cam), love Houston’s Belichickian “It doesn’t matter who gets injured, we’ll keep plowing forward” mentality (sorry, Belichick). By the way, Gary Kubiak becoming a good NFL coach has to be the upset of the year, and quite possibly, the biggest sports upset since Villanova over Georgetown or the Miracle on Ice.

Jets (+3) over EAGLES
It’s the Acerbically Bitter Fan Base Bowl, presented by Progressive Insurance! Question: How are the Eagles not dead yet? Do you realize they’d win a three-way, 8-8 tiebreaker with the Cowboys and Giants?

RAIDERS (+1) over Lions
I’m prepared for anything in this game: 400 yards in penalties, a bench-clearing brawl, either seven turnovers or 450 yards passing and 5 TDs by Carson Palmer with no in-between, Calvin Johnson being forced into defensive duty after every Detroit cornerback gets hurt, Ndamukong Suh deliberately breaking a vase with Al Davis’ ashes in it, Jim Schwartz sucker-punching Hue Jackson during the postgame handshake …

BRONCOS (+7.5) over Patriots
The strangest line of the week. Denver’s outside pass rushers will definitely pressure Brady. New England’s secondary stinks so much that Tebow will be able to light it up even before he starts Hulking up in the fourth quarter. The whole ball control thing worries me; so does the altitude; so does the Patriots’ willingness to let teams hang around (only now, they’re playing the ultimate hang-around team). And after watching Marion Barber inexplicably run out of bounds AND fumble the game-winning carry, followed by the NFL Network’s Sounds of the Game with Tebow in which he serenely muttered religious prayers and songs to himself like he knew that crazy Broncos comeback was happening, there might be larger forces at work here. I fully expect the Patriots to win … but I have a feeling I’ll be shedding 20 pounds of sweat before it’s done.

Ravens (-2.5) over CHARGERS
Doesn’t the Norv Turner era HAVE to end on a Sunday night, on NBC, in some sort of horrendous way, as Cris Collinsworth says things like, “Al, I gotta be honest, I don’t know what Norv Turner was thinking right there” and “What are the Chargers doing????”

49ERS (-1) over Steelers
Fact: Baltimore already beat Pittsburgh twice this season. Fact: The Ravens and Niners have a similar “ball control/tough defense/no turnovers/good at home” gimmick going. Fact: Both Alex Smith and Joe Flacco scare their fans while alternately causing them to become deranged if anyone criticizes them. Fact: I trust Braylon Edwards, Ted Ginn, Michael Crabtree and Vernon Davis about as much as I trust Anquan Boldin, Torrey Smith, Lee Evans and Ed Dickson. Fact: Both Baltimore and San Francisco are coached by someone named “Harbaugh.”

Day 8: The Chris Paul NBA Hostage Crisis Continues
Day 9: The Might of Dwight
Day 10: The Black Sheep Little Brother’s Revenge
Day 11: The Day After the Day the Market Crashed