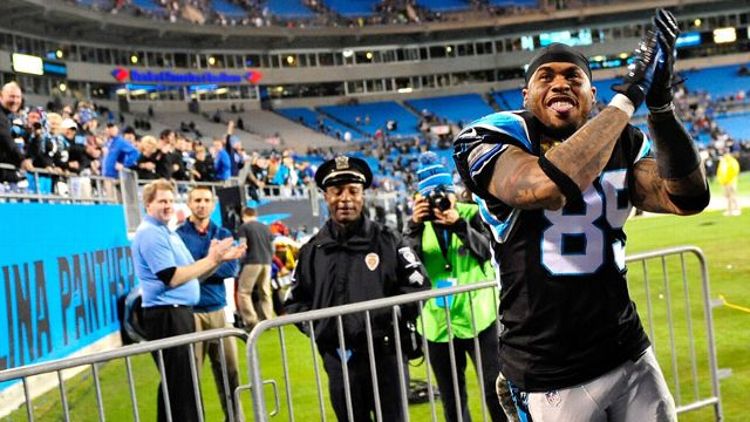 Explaining the excitement about the past six weeks of Panthers football is fairly easy. So many of us were rooting for Carolina last night against the NFL’s bluest blood because the Panthers are new, and new is what we want. As ESPN flashed graphics about how Tom Brady and Bill Belichick compare to Bart Starr and Vince Lombardi, the Panthers — wrapped in black — lined up and beat the Patriots with a 22-year-old superstar linebacker and a 24-year-old superstar quarterback.

Amid all the newness, though, resides someone very familiar, and last night he was everything we might expect. Steve Smith finished the game with four catches for 62 yards — the same sort of pedestrian night that has become standard for him at age 34. But when you consider when those catches came, whom they came against, and Smith’s general presence for Carolina, it’s not hard to see how he’s the final ingredient to the Panthers’ newfound potency.

For most of this season, Aqib Talib has been the best player on the Patriots’ defense. Before missing New England’s past three games with an injury, he might have been the best cornerback in the league. Yesterday was his first game back, and Smith didn’t waste much time letting him know exactly what type of night it would be.

There are a lot of players for whom this type of shit would seem some combination of dirty and excessive, but for Smith, it has always felt one part insanity, two parts strategy. Watch Talib in that GIF. He loses his mind. The game was a few minutes old, and Smith had his feet up on an ottoman in Talib’s head. Belichick even had to take him off the field for a handful of plays to calm him down. There was another skirmish later on, but the damage was done. And the guy with the gold “C” on his chest had sent a very clear message to his very young team that the Panthers didn’t come to kiss anyone’s ring last night. After the game, when asked about Talib, Smith had this to say:

And for some reason, it felt like he wasn’t just talking about Talib.

The Panthers’ success of late may start with defense, but their identity starts with Smith. And it’s almost by default. Smith came to Carolina seven years into its existence, and even on a roster with Julius Peppers, Smith became the face of the franchise. In his best statistical season Carolina went to the Super Bowl, and as a Bears fan, what Smith did in the 2005 divisional round is seared into my brain for all time. The 2005 Bears defense was good enough to carry a Kyle Orton–led offense (at the time, the worst season by a starting quarterback in NFL history) to an 11-5 record. It was the best defense of Lovie Smith’s tenure in Chicago, and the best season of Brian Urlacher’s. Apparently, no one told Steve Smith. He walked into Soldier Field that January and burned it to the ground. He finished with 12 catches for 218 yards and two touchdowns in a 29-21 Panthers win. It’s still the best single performance I can remember in a playoff game.

Smith’s career is best remembered for the spectacular, whether it’s his antics or games like the one in Chicago. But as it nears its end, it’s probably worth having a conversation about just how good Steve Smith has been. Debates about the Hall of Fame should always include the question of whether a player was ever the best at his position, even for a short time. Smith wasn’t just the best receiver in football in 2005. He was the best player. On an 11-5 Carolina team, Smith finished with 103 catches, 1,563 yards, and 12 touchdowns. Shaun Alexander may have won the MVP that year, but Steve Smith was the best player in the league.

The longevity is there too. Smith ranks 26th in career receptions, and another 50-catch season would put him 17th. He’s tied for 42nd in touchdown catches and needs eight more to crack the top 30. And this is all with most of his career coming with Jake Delhomme at quarterback.

The most telling stat, though, is receiving yards, and it’s not just how many he has. Smith, just as he was last night, has always been more than some combination of talent and numbers. It’s not a connection I had made, but in a lot of ways, he’s like Michael Irvin, who became the soul of those championship Cowboys teams lined with Hall of Fame players. Smith passed Irvin for 22nd on the all-time receiving yards list last night, and I’m not sure it could’ve come in a more fitting way — on a contender riddled with talent that showed it was still defined by an undersized, bigmouthed, historically great wide receiver.