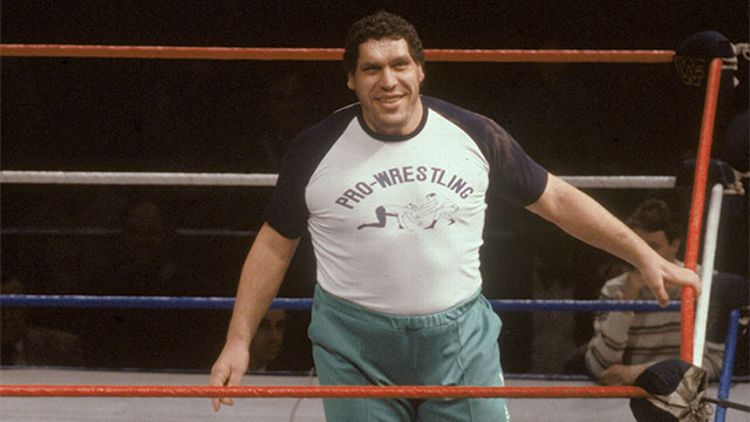 Box Brown is an Ignatz Award–winning American cartoonist best known for the comics Bellen! and Everything Dies, and he runs Retrofit, a micro-press dedicated to indie comics. He’s also a lifelong wrestling fan, and next May, First Second is publishing Andre the Giant: Life and Legend, a graphic novel–form biography. The Masked Man chatted with Brown via email and discussed the art of biography, the unreality of wrestling, and the Eighth Wonder of the World.

This book is a big departure from your previous work. What led you to Andre the Giant?

I stopped keeping up with wrestling for about 10 years, but I don’t think it ever got very far from my heart. I’m pretty interested in documentary film, and I’d watch almost anything. At some point I stumbled upon “shoot interviews” and found out that wrestlers were now talking openly about things that were going on in wrestling that we as viewers were not privy to. This fascinated me.

I’m also really drawn to the eccentric personality types that get into the wrestling business. At the time I was doing a lot of comics about myth and religion and wanted to do something different. I happened to be reading about Andre the Giant and saw how he’d gotten a ride to school from Samuel Beckett. That was the first Andre mini-comic I made. I ended up making a series of mini-comics about Andre the Giant stories and thought about the idea of a book. Of course, once I set out to create a more definitive biography, I had to start over from the beginning.

A lot of people know you from doing deeply personal/memoir-istic stuff in Bellen! How is it different doing somebody else’s life — especially a life as outsize as Andre’s?

In many ways, we all have extraordinary circumstances thrust upon us in life and it’s up to us to do the best with them. That’s what I get out of Andre’s story. I empathized with him. We all have a ticking clock above our heads, but Andre’s clock ticked much faster and more precisely. But there’s definitely a delicate line you have to walk in telling someone else’s story that’s not quite as delicate in telling your own story. I think when I’m working on a personal story there’s less pressure to try to get it exactly right. When working on Andre’s story I was really trying to be careful. I tried to put myself in Andre’s shoes, which is difficult given the extraordinary nature of his life.

You’re clearly interested in conveying Andre’s humanity as opposed to just the mythology.

Yes, totally, but I also wanted to convey his mythical qualities as well. It’s hard to even distinguish the truth from the legend with Andre’s stories. Every wrestler had a story about him, but wrestlers like to tell stories and like to embellish those stories and make them their own. And they’re good at it! Even the stories that are generally accepted to be true about Andre have a mythic quality to them. I really wanted to convey his human side and that he was a multifaceted human being with all the same idiosyncrasies as anyone. In our lives, sometimes we are magnificent and sometimes we’re not so much and we’re everything in between.

I grew up loving comics and wrestling with the same part of my brain, if that makes any sense. Wrestlers were like real-life superheroes. But just like your previous work (and indie comics in general) inverts the traditional comic form, you invert the wrestling mythology by taking on and dramatizing the reality. Was that a deliberate decision?

Sure, I definitely wanted to focus on the reality of the wrestling world. We’ve seen what they want us to see. It’s more of interest to me what we didn’t see and what they didn’t want us to know about. When I first got into wrestling as a kid I would read all of the wrestling magazines I could get my hands on. There was a satisfaction discovering that there was a whole wrestling world that existed that you didn’t see on TV on Saturday morning. There was this idea that there was this stuff going on there that they didn’t want us to see. And, here it is in these magazines! I think that sense of unraveling the mystery of pro wrestling was always something that intrigued me.

Even among us young fans there was a nebulous idea out there that it was fake. Of course the Honky Tonk Man couldn’t hold the Intercontinental Title for so long if it was real. But what parts were staged? How were they staged? As a kid, I gave them a real benefit of the doubt. I think if you asked me how much was staged when I was 10 years old, I’d probably say only a small percentage was. I remember being really upset when Earthquake crushed Hulk Hogan’s ribs, so I must’ve believed that was real in some sense.

Andre’s whole life is too big to be contained in one graphic novel. What were some things that didn’t make it in? What’s your favorite Andre story that you uncovered in your research?

A few things got cut — a short story about a bus almost flipping over in Japan from Larry Zbyszko’s book, and some bits about him filming an episode of B.J. and the Bear. I think my favorite story to work on was the fight between Andre and Blackjack Mulligan. Blackjack is quite a character. I actually interviewed him via Facebook chat, which was a surreal experience in and of itself. The first version of that part of the book was based on a retelling of the fight story from a Barry Darsow shoot interview (on which he appeared with beer in hand). After I did more research I found that Darsow got quite a few of the details wrong. Still a good story though. My comic of Darsow’s version of the story ran in The Atomic Elbow, a really amazing pro wrestling zine.

You’ve gone from a guy who didn’t think he could draw comics to an entrepreneur, founding your own publishing company, Retrofit — not to mention a guy who’s getting a graphic novel published by a mainstream press — in a pretty short amount of time. Was there a deliberate long-term plan?

I didn’t start making comics until I was about 25. Before that there was definitely something missing in my life. I was an artist without a medium. Once I discovered comics, there was nothing more I wanted to do with my life besides make comics. From that moment on there was always a plan to maneuver my life in such a way that I could spend the whole day drawing. I quit my job way before I was able to make a full living on comics, but I just didn’t care. Starting Retrofit helped make that happen. I was putting out comics as fast as I could, but I couldn’t release more than five or six a year, and I realized if I could recruit others to help I could really make printing and distributing comics a legitimate income stream.

I don’t know if I had a legitimate plan when I started beyond just working and hacking away until things worked out. There’s still a constant feeling that the bottom will drop out at any moment. I really believe in comics as a medium and I’m happy to be an ambassador for them.

Do you think it’s possible for any modern wrestler to achieve Andre’s metaphorical stature? What modern figure will people be doing graphic novels about in 20 years?

It certainly doesn’t seem possible. Any fan can give you a laundry list of what’s wrong with wrestling these days. Is there someone as big as Andre or Hogan? I suppose. I mean, I’ve grown to appreciate John Cena and I understand what he does for WWE. But, I don’t know if I’d read a book about him. Maybe there are no stars anymore — maybe the “star” is just the WWE logo. I’d hate for that to be true. I’d sure like to read a book about Vince [McMahon], but I don’t think we’d ever get the real story.

I think when Punk was on top he was poised to be The Man, but never got there. How long are they going to run The Undertaker streak? Why aren’t they building a new streak? Will they never use that streak to put over someone new? Andre put over Hogan — will they never use all of that clout they’ve put on Undertaker to make a new star? Sorry, I get carried away.

Comics fans and wrestling fans are both pretty diehard. Are you worried about the reaction you’ll get bringing your work to a whole new audience? Do you worry about alienating your current fans?

I worry about boring my readers on Twitter with wrestling talk, but I feel that this book is in line with all the work I’ve ever done. I’m as passionate about wrestling as an art form as I am about comics as an art form. I think the average person will admit that comics is an art form, albeit somewhat begrudgingly, but it’s much harder to convince someone that wrestling is an art form unfortunately. I think one of my goals for the book was to portray wrestling as something that can be transcendent. I think comics can be transcendent as well. I think both kind of have a bad reputation as a low art (at best!), but I think both cultures kind of like that status. It’s cool. I hope I make some new wrestling fans out of comics fans and vice versa.

Why Do People Keep Hitting $20,000 Half-Court Shots at Thunder Games?